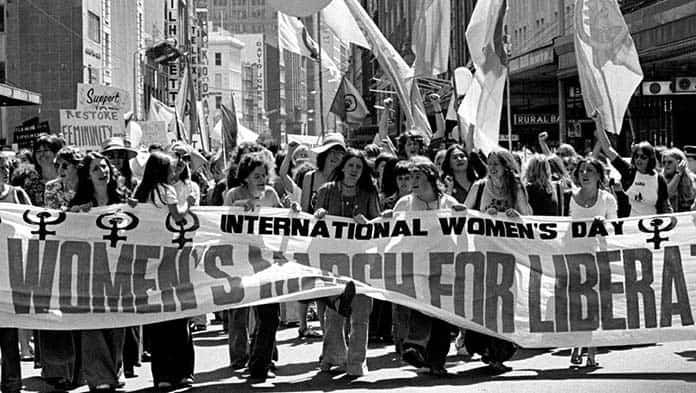 Brazen Hussies shines a light on the Women’s Liberation Movement (WLM) in Australia in the 1960s and 1970s.

Drawing on a vast trove of footage—of rallies, stunts, speeches and meetings—the film captures much of the energy, bravery and dynamism of the movement, and the sense of hope for change that it brought, although its focus is unfortunately too much on the middle class section of the movement.

The interviewees, most of them prominent WLM leaders, speak of the exhilaration they felt as they began to challenge the oppressive gender roles and expectations that women had faced.

As feminist author Sara Dowse explains: “For three months I didn’t know a single person’s name. Because people couldn’t be bothered with names. We were just women on fire.”

The WLM emerged out of the general radicalisation of the period, alongside mass movements against the Vietnam War and for Aboriginal rights, as well as a massive upsurge in working class struggle. The thousands of people who participated in these movements began to question the ideas that underpinned the system—including the oppression of women.

Women at the time faced enormous legal and social barriers. They were expected to accept roles as mothers and wives without question. Women often earned a fraction of what men earned for the same job, while many industries were simply closed to them. Abortion, contraception, divorce and out-of-home childcare were out of reach for most women.

Some of the footage shows the abuse that activists faced, particularly during “drink-ins” against the ban on women in bars, and the sexist attitudes that they had to confront, not only in society but also within the radical movements.

But the focus on university-educated, middle class leaders like Anne Summers and Eva Cox fails to capture the full breadth of the struggle, which drew in thousands of ordinary people and profoundly transformed society’s ideas about women in the process.

And the emphasis on hostility from men and particularly the “male left” means Brazen Hussies skates over some of the most uplifting moments of struggle for women’s rights.

While there was undeniably sexism amongst parts of the left, there were also many inspiring examples of unity between working class women and men that showed men could be won to support women’s rights.

Years before equal pay was enshrined in legislation, there were struggles in individual workplaces and industries for equal pay, where male and female workers campaigned together—most famously in the insurance industry in the early 1970s.

The radical Builders Labourers Federation struck in support of women’s rights, and were later convinced to campaign for women to be given jobs in construction. The ACTU was also eventually won to a position of support for equal pay.

The film touches on some of the shortcomings of WLM—such as its failure to engage with the struggles of Aboriginal and migrant women—but it doesn’t explore the reasons behind them.

WLM leaders argued for a separatist approach to fighting sexism. They maintained that all men, regardless of their class position, benefitted from sexism, and could not be relied upon to fight it.

There is a telling moment in which an Aboriginal woman says to a group of WLM activists, “we’re not strong enough yet to split [from our men]”.

For many working class women it made little sense to separate themselves from the men who shared their daily experience of racism, or who they worked and often struggled alongside in factories or offices.

Although they may hold some sexist ideas, male workers don’t materially benefit from the oppression of women. They too have an interest in women’s wages being equal, for example, as a lower rate for one group of workers drags down the rate of pay overall.

It is the ruling class that benefits from keeping women’s wages low and not having to pay for the thousands of hours of unpaid child-rearing labour women carry out in the home. It is in their interest to perpetuate the sexist ideas that maintain these arrangements.

Retreat and the turn to bureaucracy

Increasingly the WLM turned away from organising broad-based, mass campaigns, to “consciousness raising circles” and political stunts by small groups. They also began to look to progressive politicians like Gough Whitlam to deliver reforms and, particularly as the radical movements of the 1970s retreated, taking up bureaucratic positions in newly formed government agencies for women.

The film makes the point that there is “still a long way to go”.

For all the achievements that have been won, many of the gains of the movement are under attack. The structural divisions in society, the gendered workforce that keeps women in lower-paid jobs, along with the lack of free childcare, mean that women still carry a double burden and do the bulk of unpaid domestic work and child care in the family.

The #metoo movement has also revealed the stark level of sexual harassment and sexist attitudes towards women that persist despite any formal equality. The media and advertising still portray the traditional sexist views of women in society as much as they ever did.

To defend these rights and win real liberation from sexist oppression we cannot rely on lobbying progressive politicians or taking the reins of state bureaucracies. We will need to build mass movements that draw in all sections of the working class, regardless of gender, and ultimately overthrow the system that keeps us all down.