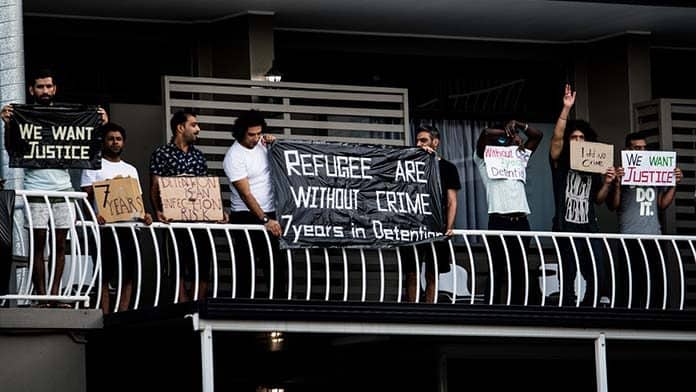 In 2010, psychiatrist Patrick McGorry made headlines when he described detention centres as, “factories for producing mental illness and mental disorder”, just after he was declared Australian of the Year.

He went on to say, “I am just stating the facts… Prolonged detention of anyone beyond a short period is harmful to mental health.”

Some of the casualties of the detention factories on Manus and Nauru were successfully transferred to Australia under the Medevac Bill which operated from February to December 2019. Some were transferred because six years of hell on Manus Island had taken a severe toll on their mental health.

But instead of freedom, the refugees are being held in closed detention in Australia.

For some, detention in Australia is even worse than detention on Manus or Nauru. One father transferred from Nauru to Brisbane to join his wife and child is being held in the Kangaroo Point hotel while his family is living just on the other side of the wire.

There is no hope of recovery while they are held in closed detention. And just as surely as it happened on Manus and Nauru, the attempted suicides and self-harm incidents are escalating in the hotels and detention centres here.

In the first two weeks of May, there have been two attempted suicides, one in Kangaroo Point Central Hotel in Brisbane, and the other in the Mantra Hotel in Melbourne.

In Brisbane, in early May, a refugee in the Kangaroo Point hotel who had been transferred from Nauru following a suicide attempt was hospitalised after refusing food for 17 days. Another Iranian refugee who had also been refusing food collapsed inside the hotel, and was taken to hospital but was returned after a few hours.

In Melbourne’s MITA detention centre, a Sudanese refugee, who had spent sleepless nights in pain despite repeated requests for a medical appointment, was taken away by Serco security guards after announcing he had swallowed razor blades. Meanwhile, the man who attempted suicide in Mantra was released from hospital, only to be held in an isolation cell in MITA.

But protests inside and outside the hotels and detention centres are keeping the pressure on the government.

The protests outside the hotels in Brisbane and Melbourne have also been central to the fight for the right to protest during the COVID-19 lockdown.

Despite the creative use of the health guidelines to hold protests outside the hotels, the police in both Queensland and Victoria have made it clear that what is at stake is the right to protest. In neither state has the police action been about keeping the community safe from coronavirus. It has been about using health regulations to prevent protests.

On Good Friday in Melbourne, police arrested Melbourne Refugee Action Collective member, Chris Breen, for organising a car convoy protest, and issued fines to 30 car drivers safely sitting in their cars for daring to drive past the hotel prison.

In Queensland, scores of police have been used to fine and intimidate the regular Friday afternoon protesters.

Last Friday, while up to 100 people exercised their way past the Kangaroo Point hotel, one protester was arrested because she was carrying a placard. It was a reminder of the worst of Joh Bjelke-Petersen’s attempts to outlaw protests in Queensland.

A day later in Melbourne, with groups of ten allowed to publicly gather, for 90 minutes around 150 people took turns to assemble in groups of ten outside the Mantra Hotel, going around the block before assembling again outside the hotel.

Meanwhile the government is having another go at passing legislation that will extend Border Force powers and allow it to ban mobile phones from detention. A National Justice Project petition (DialitDownDutton) opposing the legislation has almost 50,000 signatures.

The government wants to silence the protests inside and outside of detention. A coordinated day of defiance has been set for Saturday 13 June. That’s the next step in building the solidarity that can win the refugees’ release from their Australian prisons.

US refugee deal winds up with hundreds in limbo