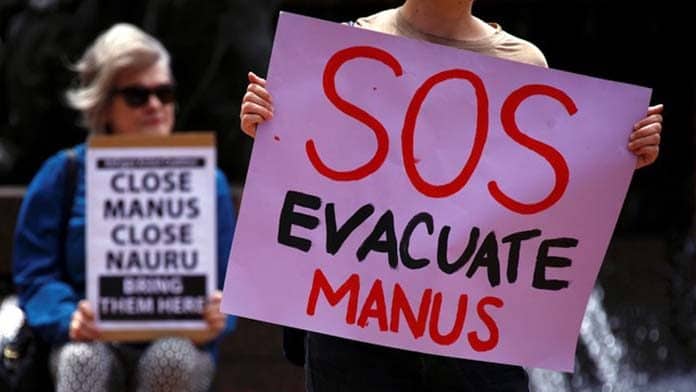 Since the election of the Morrison government, Manus Island and Port Moresby have become a pit of despair. The number of refugees and asylum seekers self-harming and attempting suicide keeps rising. At the time of writing, there have been over 60 incidents on Manus and around 30 in Port Moresby.

In just one day there were two hanging attempts, three self-harm incidents with people cutting their necks, hands and arms, while one person doused himself with petrol in an attempt to self-immolate in front of the PNG immigration office in the East Lorengau compound.

That day, there were also three incidents in Port Moresby, including one refugee taking a tablet overdose and another refugee self-harming in the Pacific International Hospital.

The mental health crisis in PNG comes as the government has re-asserted its determination to repeal the Medevac legislation. Home Affairs Minister Peter Dutton says this will be one of the first business items for the new parliament. The Bill, which only became law in February through a combination of Greens, Labor and cross-bench MPs including Kerryn Phelps, allows for the medical transfer of sick refugees on Manus or Nauru on the advice of two treating doctors.

But it was the first time for 60 years that a federal government had been defeated on the floor of the House of Representatives. In a blatant piece of revenge politicking, the government wants to reverse its historic defeat, by repealing the Bill.

Morrison and Dutton have mounted a vicious campaign of lies against the Medevac Bill. Dutton declared, “I don’t want to see Australians who are in waiting lines at public hospitals kicked off those waiting lines because people from Nauru and Manus are now going to access those health services.”

Then, in a costly election stunt, Morrison re-opened the Christmas Island detention centre at a cost of $185 million, saying that hundreds of refugees would be transferred from Manus and Nauru. Before the election, Dutton claimed that paedophiles, rapists or murderers could be transferred to Australia, but that was another lie. Exactly no one has been sent to Christmas Island.

The Manus crisis coincides with two related issues. There is pressure from the PNG government on the Australian government to cancel its shonky Manus contract with Australian-owned company Paladin security. And admissions from Peter Dutton that the US resettlement deal will fall far short of accepting anything like the 1250 refugees suggested when the deal was first negotiated.

Dutton has now admitted that hundreds of refugees won’t get a resettlement place in the US. Even if the US took 1250, there would still be several hundred refugees left on Manus and Nauru. On top of that, in 2018, more than 300 mostly Iranian, Somali, Sudanese, Iraqi and Syrian refugees were rejected by the US.

Around 90 refugees accepted by the US have been waiting in Port Moresby—some for almost a year—for transfers to the US. Dutton claims that there are 295 refugees in the pipeline for resettlement. On existing figures that seems unlikely, although even if was true, it would mean the total accepted by the US would be around 800.

No matter how you do the maths, there will be hundreds of refugees and asylum seekers that Australia continues to imprison offshore. The only other third country possibility is New Zealand, which has offered to resettle 150 refugees. But that offer has been rejected by the government.

Despite the election result, the refugee issue remains a potent political question.

The movement’s campaigning means there are now over 900 asylum seekers and refugees from Manus and Nauru who are in Australia, after being transferred here for medical treatment.

National rallies on 20 July will mark the sixth anniversary of the Pacific Solution II that has denied protection to asylum seekers who arrived by boat, and imprisoned them on Manus and Nauru.

As the distress on Manus and Nauru grows the demand to “Bring Them Here” is more urgent than ever.