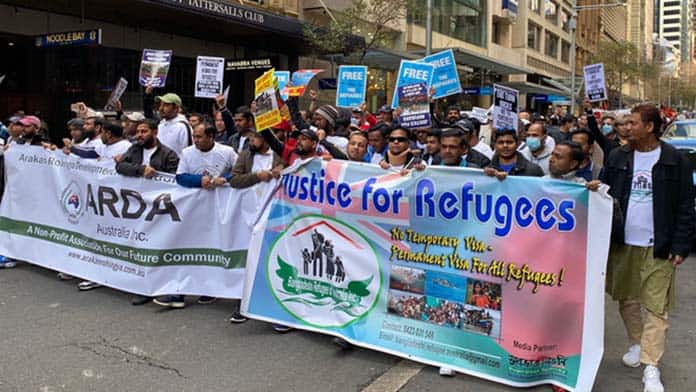 The quiet visit by Home Affairs officers to the Nadesalingam family home in Biloela in August was very different from the last time Border Force officers came to their home in 2018.

Twice, the Coalition government had attempted to deport the family and twice it was stopped by protests and legal action. Rallies in Biloela and across the country pushed the family into the political mainstream.

So much so, that getting the family back to Biloela was one of only two promises that Labor made over refugees before the election. Labor was quick to make good on that promise—and was also keen to get as much publicity as it could. Anthony Albanese posed for media photos with bunches of flowers and the two Tamil children, Kopika and Tharnicaa.

After years of the Coalition, and the punitive use of ministerial discretion, Labor’s positive use of such powers was widely welcomed. The celebrations went far beyond Biloela and raised hopes that this was Labor’s first step to right the wrongs of the past nine years.

Within days, lawyers had publicly appealed to the Immigration Minister, Andrew Giles, to similarly intervene in the case of the Scottish family threatened with deportation after Mr Green, an electrician, lost his job, and therefore his right to stay on his skilled migrant worker visa.

After the South Australian government backed the request, Giles has given the Greens a month’s extension for their appeal to be considered.

Of course, the Green family should be allowed to stay. Giles hasn’t said that yet, but his speedy response to the Greens’ appeal, however, is in stark contrast to the fact that 19,500 refugees on temporary visas are still waiting for the government to fulfil its election promise to grant them permanent visas.

Labor will pay dearly if the visas for the Biloela family is a one-off attempt to grab some positive media and earn some brownie points from the refugee movement.

Patience is wearing thin. Afghans held rallies around Australia to mark the one-year anniversary of the fall of Kabul. All the rallies raised demands for permanent visas that allow family reunion.

Thousands of refugees and asylum-seekers on bridging visas are also anxious for Labor to at least remove the requirement for the visas to be renewed every six months. But Labor’s concern to keep the architecture of offshore detention in place has seen them do nothing.

The six-month visas create problems trying to get a job or somewhere to rent. Medicare cards also expire along with the visas and the bureaucratic delays obtaining a new card can be devastating when families need medical care.

But there was little sympathy from Labor for refugees from Nauru and PNG on bridging visas who raised the issue during recent delegations to parliament.

Similarly, the calls to evacuate the remaining 200-odd refugees from Nauru and PNG fell on deaf ears, although Labor knows that between 500-600 refugees will have no secure resettlement even if all the places in US, Canada and New Zealand are taken up.

Now, very quietly, Labor has dumped the private Liberal Party-donating company, Canstruct, that has made hundreds of millions of dollars from running Nauru for the Australian government.

But it is being replaced by MTC Australia, a subsidiary of a private company that runs prisons and detention centres in the United States.

In January, the Coalition gave Canstruct $220 million for “garrison services” on Nauru for just six months, around $1 million for every refugee and asylum seeker on Nauru. Instead of scrapping offshore detention, Labor is maintaining the horror.

On Tuesday 6 September at 11am, refugees and supporters will converge on Parliament House in Canberra to demand the Labor government makes good on its promise to grant permanent visas for all those on temporary visas, known as TPVs and SHEVs.