The PNG “solution” is the latest episode in Australia’s history of imperialist domination of PNG, writes Tom Orsag

Kevin Rudd’s deal to send refugees to PNG shows Australia’s neo-colonial attitude to the local region. PNG is not a safe place for asylum seekers. Its history of colonial domination by Australia has condemned much of the country to poverty and underdevelopment. 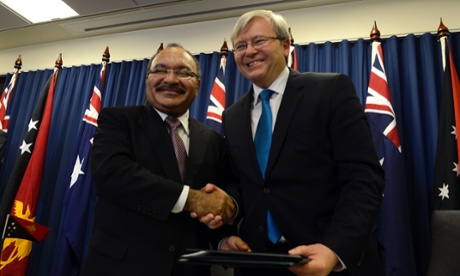 PNG remains overwhelmingly poor. Around 85 per cent of the population make a living in the informal economy, mostly through subsistence farming. Up to 97 per cent of all land is held under communal tenure.

For those forced to survive in the major cities, where any resettled refugees will end up, unemployment is between 60 and 90 per cent.

Violent crime is rampant, with street gangs known as raskols terrorising the population in places like the capital Port Moresby. The city is considered one of the most dangerous on the planet.
Port Moresby and Lae are full of squatter camps with no running water, no electricity, no schools and no health care.

Just half of the country’s children go to school, and then only for an average of three years.
PNG spends 2.7 per cent of its gross domestic product on health compared with sub-Saharan Africa’s 4.5 per cent and the world average of 8 per cent. The country has two to three times Australia’s rate of HIV.

The mining boom in PNG has driven up food and housing prices. As Ben Bland explained in the Financial Review, “prices were already high, [but] the investment surge has driven up the cost of living to punishing levels.”

Australia directly administered PNG as a colony until the country’s formal independence in September 1975. This arrangement began when Australia took over as colonial master of the territory of Papua in 1906 and then added New Guinea from Germany in 1914.

The Australian authorities did little to provide services or develop the country. Up until 1953 education was simply regarded as the task of church missions. As a result PNG had a 99 per cent illiteracy rate in 1953.

By 1966, less than 300 PNG people had completed more than Year 8 of high school and there was not a single PNG university graduate!

Australia also held back and distorted PNG’s economic development in order to suit Australian interests.
This involved restricting and prohibiting the growing, processing and export of any crops which would compete with Australian exports such as sugar and bananas.

In the 1920s and 1930s, when economic development in PNG began to take off, Australia’s policy was to ensure that Australian business dominated the economy.

The PNG economy never had the space to diversify. Its economy is still based on mining, such as gold and copper, and agricultural products like coffee, tea and cocoa. All these commodities have highly volatile prices on the world market.

Even today most of the gold mined in PNG goes to the Perth Mint for refining. PNG’s first oil refinery was not built until 2004. The country has never developed a substantial manufacturing base, or the jobs that go with it.

Rowan Callick, an Australian journalist who specialises on PNG, wrote that, “PNG, has since the early days, lacked the capital to meet its development aspirations. The colonial power, Australia, had failed to bequeath it the infrastructure or skills it needed.”

Recent years have seen a mining boom. Investments in the billions are at stake, like Exxon-Mobil’s $19 billion LNG project, due to start production in 2014.

But mining projects often deliver little for the local population. Mining employs just 1 per cent of the workforce, with most managers and supervisors expatriate Australians. Almost all mine-related consumption is imported from Australia, including goods consumed by mine workers.

Mining has also caused terrible environmental destruction. The most notorious example was BHP’s Ok Tedi copper mine, which dumped mine waste directly into nearby rivers.

The waste destroyed huge areas of native forests and inundated local villages and farmland, affecting the livelihoods of 50,000 people.

Environmental damage and the lack of benefits to the local population from the Panguna mine, the largest copper mine in the world, led to a rebellion and war on Bougainville in the 1980s and 1990s.
Australian governments, under Hawke, Keating and Howard, fuelled the war on Bougainville by providing additional military aid to PNG, on top of the existing aid budget.

In 1989, Rio Tinto estimated the remaining ore in Panguna would earn it another $7 billion, based on copper and gold prices in that year. But since the war the Panguna mine remains closed.

Australia’s rulers have always sought control of the islands to our immediate north. This is seen as key to their military and strategic interests.

Their prime aim has been to ensure no rival power gains influence or any chance of establishing a military presence in the area. As the 2013 Defence White Paper puts it, “Australia seeks to ensure that our neighbourhood does not become a source of threat to Australia and that no major power with hostile intentions establishes bases in our immediate neighbourhood.”

In particular they have been desperate to ensure that, as White Paper puts it, there be no threat to the, “major sea lanes that are critical to Australian and regional trade”.

PNG is strategically located as an island barrier to Australia’s relatively under-populated north. This means it is seen as crucial for defence purposes.

The scramble for control of the South Pacific dates all the way back to the 1800s.

As a white British outpost far from “home”, the Australian colonies were in paranoid fear of invasion. Indeed, if they were dispossessing the Aboriginal population by force, could not a non-British power do the same to them?

As the major European powers divided the world up into rival colonial empires, the rulers of the Australian colonies attempted to force Britain into grabbing hold of the islands in the South Pacific and establishing direct imperial rule.

Lord Derby, Britain’s Secretary of State for the Colonies, renounced the takeover as being unnecessary.
But within months, Germany had seized northeastern New Guinea and Lord Derby did an about-face, claiming the south coast of New Guinea (Papua) in 1884 and handing control of it to Australia by 1906.

The desire for Australian imperialist control of the immediate region was one of the key factors driving the move towards Federation in 1901.

At the 1891 Federal Convention, Henry Parkes, considered one of the “founding fathers” of the Australian nation, announced, “I have no doubt whatever in my mind… if Australia could have spoken with one voice in the year 1883, New Guinea would have belonged to Australia. Australia ought to be mistress of the Southern Seas. The trade, the commerce… of these groups of rich islands ought to centre in our ports; and with these advantages, we ought to hold mastery of the hemisphere. That is our destiny, and it will come.”

After the First World War, Australia acquired the former German possessions in New Guinea. It even imposed the White Australia Policy on them in order to prevent Japanese immigration and investment.
The area has also been a source of profits for Australian companies, who have invested millions of dollars there.

Among the most foul examples was the practice known as “blackbirding”, where Pacific islanders were kidnapped by “recruiters” to work as slaves on Queensland’s sugar plantations.

As academic Peter Coriss has written, “In the 1860s many hundreds of New Hebrideans [from Vanuatu] were forced or deceived into entering the recruiters’ boats, the same was true in the Solomons ten years later and yet again around New Guinea and the adjacent islands in the 1880s.”

Australian companies have made millions out of mining on PNG. At one point in the mid-1990s, one third of all Australian gold came from mines there.

All of them want a stable and reliable state there so that they can continue to plunder PNG’s mineral wealth.

So in 2003 the Australian government pressured PNG to install Australian officials in key public service departments, including finance, law and justice, transport, aviation and immigration.

This came along with 300 Australian Federal Police installed within PNG’s police force.

It followed a similar operation in the Solomon Islands, where almost 2000 Australian troops and police led an effectively takeover.

Corruption in government is rife, since control of the state is one of the few paths to real wealth in the country.

In December 2011, the Australian government watched with concern as political turmoil gripped PNG. For a few days the country had two rival Prime Ministers, after former PM Michael Somare secured a Supreme Court ruling to have himself reinstated, following his ousting by current PM, Peter O’Neill.
The National Security Committee of Cabinet drew up plans to intervene with Australian troops, if the crisis developed into open warfare between the O’Neill and Somare factions.

Australia’s role as neo-colonial master of PNG is obvious. The refugee deal is just another example of these efforts to impose its will throughout the region.

Still unfinished business for the refugee movement after we turn back...

It wasn’t long before Scott Morrison found a chance to boast about being the architect of Operation Sovereign Borders and turning back asylum boats.

The Woomera breakout saw protesters help refugees escape detention, advancing a movement that won freedom for many others too, writes James Supple

‘We’re treated like animals in this place’: bashed detainee speaks out

“I’ve never been hit so many times on my head for nothing.” That’s what one detainee in the Christmas Island detention centre told Solidarity after guards went on a violent rampage last week.