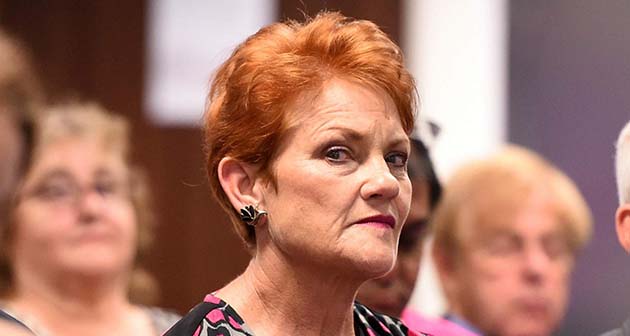 The Essential poll showing 49 per cent support for Pauline Hanson’s call to ban Muslim immigration caused widespread shock. Even if it slightly exaggerates the figure, it’s clear there is a pressing need to combat Islamophobia. Hanson is far from solely responsible for this.

Her embrace by government minister Michaelia Cash following her first speech in the new parliament symbolises the Liberal Party’s attitude to her revived One Nation Party.

The bulk of Hanson’s speech was a diatribe against Muslims, as she repeated her call for a ban on Muslim immigration, new mosques and Islamic schools. This was mixed with attacks on welfare recipients, blaming single mums for having more children to get extra welfare money, and a men’s rights agenda attacking the Family Court and child support payments. She also blamed high levels of immigration for taking jobs and draining government money.

The Greens were right to walk out while Hanson spoke.

Yet not a single senior government figure would condemn her speech, with Turnbull simply dismissing the request to do so by saying, “I’m not going to run a commentary on her”. The best Financial Services Minister Kelly O’Dwyer could do was to “politely disagree”.

Turnbull is happy to say out of one side of his mouth that, “tagging all Muslims with the crimes of a few, is fundamentally wrong”. But the Liberals’ decision to go easy on Pauline Hanson projects a different message.

The Liberals’ constant effort, as Special Minister of State Scott Ryan put it, is to avoid showing, “disrespect to a person that’s been elected to Parliament”. This gives Hanson a legitimacy and respect her ideas do not deserve.

This all came hot on the heels of Tony Abbott’s cup of tea and fawning video from Hanson’s office, where he congratulated her and declared, “Pauline, there are half a million people who voted for you and you’ll be a strong voice for their concerns”.

These efforts to make up with Hanson are all the more significant given it was Abbott who organised the Liberal Party’s legal efforts to crush One Nation in 1998.

One obvious reason for the Liberals’ embrace of Hanson is that they need her votes in the Senate. When both Labor and The Greens oppose legislation, the government needs One Nation’s votes to pass anything.

But some in the Coalition also recognise that Pauline Hanson uses the same fearmongering and xenophobia that they too have used to win support. They hope to coax some of her voters back through stressing their agreement with One Nation.

Hanson’s attacks on Muslims are only an extension of the fear campaign about terrorism and securing the borders coming from Malcolm Turnbull and the Coalition. Turnbull himself has blamed “porous borders” in Europe for terrorist attacks, trumpeted his own efforts to keep out refugees. It should hardly be a surprise that some people draw the conclusion that all Muslims should be kept out.

This is the same approach John Howard took following the rise of One Nation last time. He conceded to Hanson’s concerns by cutting immigration, attacking Aboriginal programs and native title and targeting refugees. Howard even stole some of her policies, including punitive Temporary Protection Visas for refugees.

The hard right Coalition MPs are particularly keen to imitate One Nation. George Christensen admitted he had even persuaded Hanson not to run a candidate against him at the election. Christensen explained that, “obviously, they were not looking at ousting an MP who was advocating the same sort of views espoused by One Nation”. Cory Berardi has blamed the Coalition’s slide in the polls on, “One Nation and others who are saying the things that I think the Liberal Party should be saying, with a bit more nuance”.

Hanson’s speeches do real damage. Her talk of banning mosques and Islamic schools, along with further Muslim immigration, will give confidence to racists, leading to more abuse, harassment and even physical violence against the Muslim community.

Hanson needs to be condemned. But the left also needs to organise to win people away from her racism and lies. She can’t be allowed to pose as standing up to politicians and the elite. One Nation has never done anything to target the corporations and the super-rich—those really responsible for cuts to services and jobs in an effort to boost their profits. Instead they target some of the most vulnerable people in our society—migrants and minority groups. The fight against Hanson needs to be connected to class issues like the fight for jobs, against cuts to Medicare and privatisation.

The political mainstream is incapable either of dealing with these problems, or countering Pauline Hanson’s racism. We need a grassroots campaign to undermine Islamophobia.