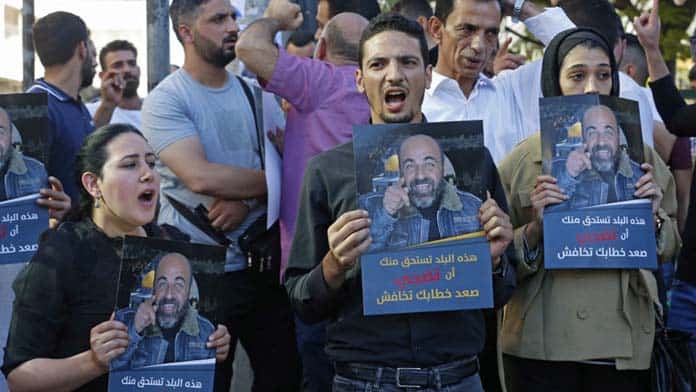 Thousands of Palestinians have joined marches against the Palestinian Authority (PA) in the occupied West Bank, after it launched a wave of arrests against protesters and activists.

Established under the Oslo Accords in 1993, the PA was given limited control in the West Bank and Gaza, occupied by Israel since 1967. It was formed as a concession following the First Intifada, or Palestinian uprising, but has taken on a role policing the West Bank on behalf of Israel and suppressing political protest and expression.

The PA has effectively surrendered to Israel and the US, giving up on the struggle to liberate Palestine in exchange for a limited role policing and administering the West Bank. This is widely seen as a betrayal amongst the Palestinian people—a poll published by the Palestinian Centre for Policy and Research in June found that 56 per cent of Palestinians now see the PA as a burden.

PA President Mahmoud Abbas was elected once in 2005, but has refused to hold another election for the last 16 years.

In 2006 his party, Fatah, lost an election to Hamas but managed to keep control in the West Bank with US and Israeli support, while Hamas took control in Gaza.

The recent crackdown dates back to April, when Abbas indefinitely postponed parliamentary elections, once it again became clear his party would lose power. Protests against the PA began almost immediately.

With the cracks in PA’s control beginning to deepen, the regime began to target political dissidents by arresting dozens of journalists, union organisers and other opponents, as well as cracking down on protests and demonstrations.

In May, following Palestinian protests in East Jerusalem over the dispossesion of residents of Sheik Jarrah and a renewed Israeli bombing campaign against Gaza, the PA moved to add its voice to the protests, even supporting the Palestinian general strike that occurred on 18 May.

However it only did so because it felt it was necessary to maintain its own position as the claimed political representative of the Palestinians.

The Palestinian population was rising up across the whole of Palestine—inside Israel’s borders, in East Jerusalem and even in Gaza, where Hamas launched rocket strikes against Israel.

Then Israeli airstrikes pounded Gaza, creating more anger, and enormous pressure on the PA to respond. But since the end of the bombing, over 40 Palestinians have been murdered by Israeli forces—and this has been met with silence from the PA. Gaza remains under a brutal Israeli blockade, with unemployment around 50 per cent and almost 70 per cent suffering food insecurity.

In late June prominent activist Nizar Banat was abducted and beaten to death at the hands of PA police. He had become a thorn in the side of the PA’s rulers, exposing their corruption and railing against the decision to cancel the elections.

In response, protestors took to the streets in the West Bank city of Ramallah and were again met with repression.

His killing has only served to inspire further protests and unrest, despite the frequent demonstrations in Ramallah always being met with disproportionate, extreme violence from both police and PA supporters.

It is clear that the PA is more than happy to employ the same brutality it criticised Israel for less than six months ago in order to quash popular protest.

However despite rising opposition, the PA may have been thrown a lifeline, after Israel agreed on 30 August to provide the PA with over $200 million toward strengthening their grip on the West Bank. Such a payment is aimed to ensure the ongoing suppression of Palestinian dissent and, perhaps more importantly for Israel, prevent Hamas from gaining political ground.

There should be little doubt that the PA is far from the legitimate representative of the Palestinian people.

There is no justification for continuing to postpone democratic elections. But there is now widespread disillusionment among the Palestinians at both major political factions, in Hamas as well as Fatah.

The recent wave of protests saw a new younger generation of Palestinian activists, like Mohammed El-Kurd from Sheikh Jarrah, reach a global audience for the ongoing Palestinian struggle.

Palestinians continue to resist despite decades of Israeli dispossession, occupation and oppression, backed up by Western imperialism. Solidarity from workers and ordinary people across the Arab world and beyond are the key to winning liberation.

Tutu: a fighter against apartheid, in South Africa and Palestine

One aspect of Tutu’s politics that most official “tributes” have avoided mentioning is his support for the Palestinian struggle.

Why standing up for Palestine is not antisemitic

Rob Ferguson is an anti-racist activist and a member of the Socialist Workers Party in Britain who has written widely on the use of the IHRA definition on antisemitism. He spoke to Solidarity’s David Glanz.