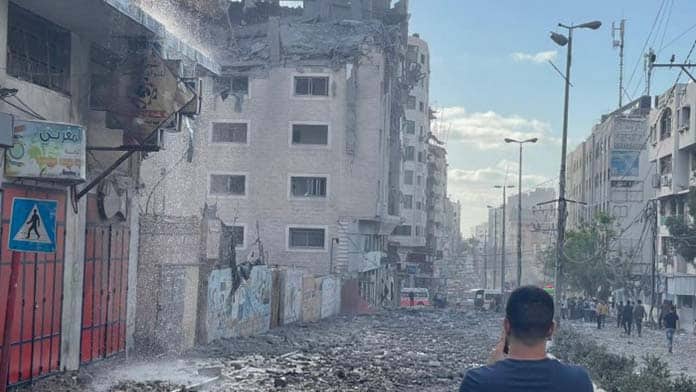 Israel has paused its pummelling air strikes on the Gaza Strip but its genocidal war against the Palestinians continues.

The bombardment included the murder of 256 people, including at least 66 children, in what Palestinians in the Gaza Strip describe as the most intense airstrikes they have endured.

Israel destroyed schools, Red Crescent medical facilities and the buildings of media organisations covering the attacks. It targeted residential towers on the flimsy pretext that there may be some Hamas rebels in the basements. It massacred entire Palestinian extended families.

The assault forced at least 58,000 Palestinians to flee their homes and many thousands are now homeless.

Despite this, the bloody campaign did not amount to a victory for Israel. Israeli politicians had said that the bombing would not stop until there was “complete quiet” from the armed resistance groups like Hamas. But Hamas was able to continue firing rockets into Israel, some breaking through the air defence systems and killing Israelis.

Israel is even more worried about the mass protests that erupted throughout all of historic Palestine against the ethnic cleansing of Palestinians from the Sheikh Jarrah neighbourhood in East Jerusalem.

The strength of the protests and a general strike by Palestinian workers has stalled Israel’s proposed evictions for now.

But the threat still remains. At least 150 Palestinian households in the Sheikh Jarrah and Silwan areas of East Jerusalem have been served with expulsion notices and face legal action.

If Israel pushes ahead with the removal of the Palestinian families it risks provoking another round of protests that could escalate.

Meanwhile, under the cover of the ceasefire and away from the media spotlight, Israeli militarised police have launched sweeping repression against Palestinian protesters to try to snuff out the resistance.

In a blatant show of force Israeli cops attacked worshippers at Al Aqsa Mosque shortly after the ceasefire was declared on 21 May, using tear gas and stun grenades.

Since then, Israeli cops have arrested more than 1000 Palestinians in cities inside Israel’s borders.

Israeli occupying soldiers are also stalking the streets of the West Bank, where they have killed 30 Palestinians since mid-May.

The attacks on Gaza and the uprising in response have provided a tense backdrop for efforts to form a new Israeli government following recent elections.

The outbreak of war was expected to turn opinion in Benjamin Netanyahu’s favour but it has not been enough to save him.

After failing to win an outright majority in the polls, he has been frozen out of government for the first time in 12 years and forced out as Prime Minister.

Some had warned that Netanyahu was leading Israel down the path of a civil war through sparking the mobilisation of Palestinians within the 1948 borders of Israel.

The long-running investigations into his corruption and cronyism have finally played politically against him.

Netanyahu tried but failed to form a coalition government before the deadline. The new coalition government will instead be led by the far-right Naftali Bennett and Yair Lapid, who is from the secular Zionist party Yesh Atid. They will serve as Prime Minister for two years each. Some smaller parties feature in the coalition too.

It will be the fifth government in just two years—a sign of the political volatility in Israel. While the configurations in the Israeli Parliament may change, the policies of apartheid and illegal occupation remain.

Bennett and Lapir are in lockstep with Netanyahu opposing the fundamental questions of equal rights and freedoms for Palestinians, the right of return for Palestinian refugees, and maintaining Israel’s apartheid system of domination.

Bennett, who is leader of the New Right party, is even more right wing than Netanyahu. He previously headed up the far-right, orthodox Jewish party Jewish Home. He was also the leader of a Jewish settler group. He believes peace with Palestinians is impossible and has said the creation of a Palestinian state would be suicidal. When Palestinians protested in 2018, Bennett said Israeli troops should have a “shoot to kill” policy including for children.

Lapid is considered a “centrist” in Israeli politics because he supports a two-state solution. But he is not much better. He has said: “I am enthusiastically in favour of annexing the Golan Heights. My principle says maximum Jews on maximum land with maximum security and with minimum Palestinians.” He supports maintaining the Jewish settlements in the West Bank.

What is certain is that the instability will continue. The huge protests and the general strike carried off by the Palestinian resistance have given the Israeli regime a shake. For it to be fully toppled, these will have to spread throughout the whole region.

Zionism and the Middle East—why the West arms Israel