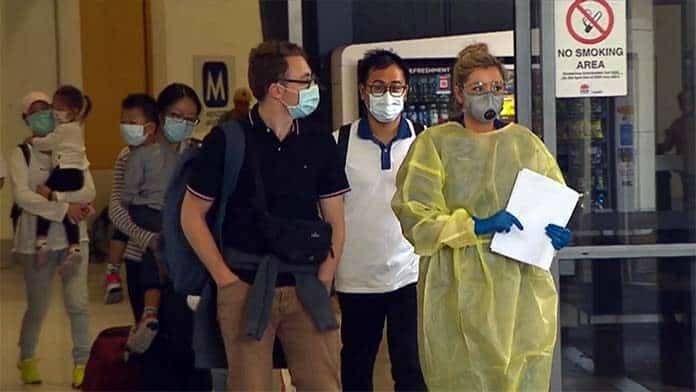 Media-driven panic over the spread of a new coronavirus (Corvid-19) has produced a wave of anti-Chinese racism.

The World Health Organisation has explicitly advised against imposing travel bans in response the outbreak of the virus. But, following Donald Trump, Scott Morrison’s travel ban on everyone from China who is not an Australian citizen or permanent resident has fuelled the racist response here. It has reinforced the idea that all Chinese people are suspect.

The Daily Telegraph, among others, has drummed up fear by saying the virus had “pandemic potential”, warning of “panic buying” of face masks and hand sanitisers and sharing photos of “terrified travellers” from China trying to protect themselves.

Melbourne’s Herald-Sun splashed the words “Chinese virus panda-monium” across its front page. In Perth, a Malaysian student was locked out of her accommodation, although she hadn’t travelled to China.

The Australian government’s move to quarantine Australian evacuees in the Christmas Island detention centre is not about healthcare. It’s a political stunt to prove that it’s “tough on borders”. Anyone on Christmas Island who actually got sick would have to be transferred to mainland hospitals for treatment.

Although Home Affairs Minister Peter Dutton insisted there were no hospitals that could cope, the Sydney Morning Herald revealed that Dutton rejected a plan from NSW health authorities to use hospitals in Western Sydney.

Tragically, some unions have taken up the scaremongering, with the TWU calling for bans on flights from China even before Morrison imposed them.  The MUA has called for ships to be held at sea for 14 days before docking in Australia.

Other directly-affected unions have taken a stand against the racism. In both Sydney and Melbourne, the respective NTEU branch secretaries spoke at rallies calling on the government to lift the travel ban.

China’s economy is slowing as many major cities and manufacturing areas have been shut down, with the inevitable knock-on effects beginning to impact on the global economy.  Morrison’s travel ban is already hitting Australia’s tourist industry, with warnings of up to 1800 jobs at risk in Cairns. Around 100,000 international students at universities are stranded in China, which could mean job losses for staff. The travel ban is also putting thousands of overseas workers’ jobs in jeopardy.

Any slowdown in the Chinese economy will inevitably cut Australian exports of coal, LNG, iron ore, and meat, which in turn will cut government revenue. But for now Morrison is following his racist instincts and is more interested in following Trump, who sees the coronavirus through the prism of imperialist competition with China.

There have now been 1500 deaths from the virus—overwhelmingly in Hubei province where it first emerged. Just three have been recorded outside China. Reports say most of those who have died so far have been over 60 years old and suffered from other underlying health problems.

Other viruses have killed far more people. The flu has claimed 8200 lives in the US alone this flu season, and normally kills 400,000 globally each year.

The new coronavirus also appears to be less deadly than SARS or MERS. Around 2 per cent of those infected have died, compared to 10 per cent for the SARS virus and 34 per cent for MERS. Outside the Hubei province, where the outbreak began, just 0.55 per cent of those infected have died. This suggests inadequate and overwhelmed medical services may be partly to blame. Tragically more than 1700 Chinese medical workers have become victims of the virus.

The official Australian Health Protection Principal Committee has advised that people who have travelled to Hubei province, where the virus is concentrated, or had contact with a person who has the virus, are the main concern. It does not recommend self-isolation or quarantine of people from the rest of China due to the low number of cases.

This has not stopped a number of schools bowing to fear, telling students who have travelled anywhere in China to remain home for two weeks. The NSW government has also adopted the same policy, despite saying initially that only those who had been in contact with the virus were of concern. It put the change down to “community expectations”, not medical advice.

A number of private schools as well as Sydney Catholic schools have completely banned for two weeks any students who have travelled to China. Stuartholme private boarding school in Brisbane has isolated ten Chinese students and forced them to have daily medical checks.

The Sydney University student association is holding another protest during Orientation Week to show support for international students, solidarity with Wuhan and the Chinese community, and to demand that Morrison’s lift his travel ban.

The coronavirus outbreak is no excuse for fearmongering or racism.

By James Supple and Ian Rintoul

COVID-19 crisis shows childcare should be a public service