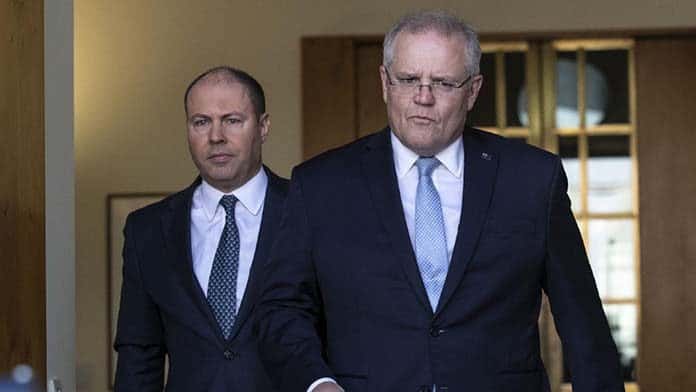 Morrison and the national cabinet have announced what he called “stage one restrictions” closing cafés, restaurants, pubs, churches and cinemas.

He claimed the reason that the new measures were needed was because ordinary people were not heeding “social distancing”, saying that, “we can’t have the confidence” the measures “will be followed to the level of compliance that we require”. In particular, he blamed people who went to swim at Bondi Beach last Saturday.

But the real reason that Morrison has introduced the closures is the rapidly increasing number of coronavirus cases—now up to 1641 as of 23 March.

The numbers are dangerously increasing. But it is Morrison who is to blame. In countries that have managed to contain the virus, widespread testing has been the central thing that has allowed it to be detected early, which in turn has allowed early isolation of anyone infected.

Australia is drastically short of testing kits. And there are rigid guidelines for testing in place because the test kits have to be rationed. Authorities have admitted that Australia is short of a reagent needed for the tests.

While Morrison wags his finger at people on Bondi beach, 2700 people were allowed to disembark from a cruise liner at Circular Quay in Sydney on Thursday, even though medical staff knew that a number of people on board were sick, and had swabbed 13 people with high temperatures for tests. So far, 26 people off the ship have tested positive, 18 in NSW, eight in other states.

A more rigorous testing regime would have found the infections before those with the virus moved into the community. The lack of suitable accommodation also means that people who are found to be positive for the virus are only required to self-isolate in their homes, even though infection among families is one of the primary ways it is spread.

When Tom Hanks and Peter Dutton were infected, they were placed in hospital isolation—not for their treatment but to isolate them from others. The government abandoned this policy as the case numbers increased.

Morrison’s “stage one restrictions” are a result of the government’s failure to act quickly to make the medical preparations that were necessary. In NSW, there are already 19 patients in Intensive Care Units.

What’s needed is a massive effort to ramp up the testing and prepare the hospital beds and intensive care units that will make a difference to the number of cases and the number of deaths. At the rate the virus is spreading, Australia is only a week behind Britain and two or three weeks behind Italy.

China alerted the world to the outbreak on 31 December. Australia’s first case was recorded on 25 January—two months ago—yet the government dithered.

So far one company in NSW, ResMed, has indicated that it could start to produce more ventilators, which are crucial for saving lives. That increased production needs to start now—thousands of ventilators are going to be needed in Australia and South East Asia alone.

While production is determined by profits, ordinary people are not going to get the protection and medical treatment that will be needed.

The government is set to ratchet up more extensive shutdowns, and is preparing for lockdowns, as they desperately try to “flatten the curve.” In South Korea, confirmed infections dropped from 909 cases on 29 February to just 74 on 18 March without the kind of lockdowns seen in China. “South Korea is a democratic republic; we feel a lockdown is not a reasonable choice,” says Kim Woo-Joo, an infectious disease specialist at Korea University.

Victoria has set up a 500 strong police task force to police “stage one restrictions” and go after “selfish Victorians” who aren’t self-distancing. But where is the task force to expand the production of testing kits, protect nursing homes and extend the hospital system? The shortcomings of the Victorian health system will soon be exposed.

The shut-down measures are being put in place because state and federal governments have sat on their hands. But it’s not ordinary people who are spreading the virus; it’s Morrison.

Morrison’s economic package is extraordinary. After wailing that the budget had to be in surplus, the government has found $189 billion to support business. And even that won’t be enough.

In total 70 per cent of Covid stimulus 2.0 is going to big business. Morrison is handing billions of dollars to business with no guarantee that those companies will re-employ the workers they have sacked.

Similarly, for years the Liberals kept the unemployed in poverty and turned a deaf ear to all the calls to increase Newstart. As recently as October, the government refused point-blank to increase the dole; now they have doubled it.

But the increase to the dole won’t be available for another five weeks. Many thousands more people have lost their jobs overnight as the result of the newly announced closures—they need help to pay rents, mortgages and household bills now.

After initially being left out, students who receive Austudy and Youth Allowance will now get the increase too, following an outcry.

But carers, international students, and tens of thousands of asylum seekers in the community are among those who will get nothing from Morrison’s package.

ACOSS has spelled out just a few of the protections that ordinary people are still waiting for, “we still need companies that provide essential services such as energy, water, finance, rental housing and telecommunications to also provide relief by guaranteeing no disconnections, pause debt collection and legal/bankruptcy proceedings practices, and  waive penalty and late fees, including additional interest charges.”

In the last global financial crisis, in 2008-9, governments around the world stimulated economies and bailed out the banks. As the system slowly recovered, profits soared but jobs and wages did not. Twelve years later the global system is sliding into depression.

Around the world, governments have been forced to take over control of more and more of the system—hospitals in Spain have been put under government control, airlines have been nationalised, the army has been mobilised to ensure supplies and deliveries (including in Australia). This is because capitalism is run for profit, not human need.

We will need to keep fighting for safe workplaces—while the schools are open, there is a need for more cleaners and teachers and teachers’ aides and far more staff are needed in nursing homes. In Singapore, which has more successfully contained the virus, school class sizes have been halved, strict hygiene measures instituted, and break periods staggered to reduce playground contact.

We need to re-organise production so that tens of thousands more people have productive jobs. We needed more aged care homes and hospitals even before the coronavirus—now they are urgently needed.

We need to fight to expand the health system, and to win the job guarantees that are needed to protect us against the virus and the system. Our future and our lives depend on it.