Peter Garrett’s collapse into conservatism has been not just quick, but abject. The Environment Minister’s credibility is not in tatters—it has evaporated completely. David Glanz looks at what happened

Just two years ago Garrett told the ALP conference: “I visited the shrine at Hiroshima. I know the history of Maralinga. And I’ve witnessed the struggle at Jabiluka. I have long been opposed to uranium mining, and I remain opposed to it. I am unapologetic about this. In fact, I am proud of it.”

Yet last month, the man who used to belt out “And the company takes what the company wants/And nothing’s as precious as a hole in the ground” approved the Four Mile uranium mine in South Australia. 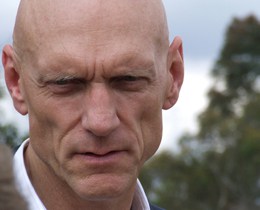 Garrett co-founded the Nuclear Disarmament Party and later headed the Australian Conservation Foundation. As late as 2007 he was prepared to say: “I’ve always maintained and indeed committed myself to the notion that Australia should be nuclear free—that our country is as far into nuclear activities as it ever should be.”

How can someone who has dedicated a lifetime to a cause make such a U-turn and so quickly? The question is important because it is not just about Garrett.

Despite the long decline in Labor’s membership and the rise of the Greens, a significant layer of activists in the student and trade union movements continue to join the ALP. Some are out to advance their careers, but many join out of a belief that it is the only realistic way to bring progressive change. If Garrett’s trajectory behaviour were a one-off, it would have little significance. Yet his move from progressive and activist to a cog in the ALP machine is far from unique.

Julia Gillard used to be a member of the Socialist Forum, which grouped Labor left-wingers and former Communist Party members. Anthony Albanese became a leading figure in the NSW Labor Left: he is now Rudd’s frontbench attack dog. In Queensland, premier Anna Bligh comes from the Left faction, but has refused to do anything to decriminalise abortion and is now pushing a massive privatisation agenda.

The gap between policy positions and policy delivery emerged early in the life of the ALP. The Australian Marxist, Vere Gordon Childe, noted in his seminal 1923 book, How Labour Governs, the “selfish and cowardly opportunism which has distinguished the workers’ parliamentary representatives”.

He continued: “When it comes to a question of forcing a Labour Government to give effect to their platform or realise the ideals they been sent into Parliament to accomplish, the organisation has broken down.”

Things have got worse. Whatever the party’s weaknesses in its early years, there were nonetheless members—even ministers—who sincerely held left positions, who sometimes identified as socialist and who used their position to advance the struggle.

On the industrial front, Queensland Labor MP Jim Pearce joined the picket line at Gordonstone in 1999 to help stop Rio Tinto busting the miners’ union, the CFMEU. Even Mark Latham was prepared to identify with an industrial struggle, speaking out for strikers at the Morris McMahon factory in Sydney in 2003.

But these sorts of examples are becoming increasingly rare. The Labor Left had, until 1989-91, a number of touchstones: opposition to US imperialism, support for state ownership and economic intervention, and sympathy, to varying degrees, with some vision of socialism—even if this was often understood in terms of the command economies of Russia and Eastern Europe.

With the collapse of the Soviet Union and its allies, and the triumph of neo-liberalism, the Labor Left lost its way. It has splintered into a series of personal fiefdoms dominated by individual MPs—think Martin Ferguson, Doug Cameron, Kim Carr—whose motivation is primarily factional manoeuvring to preserve their own base.

All of this has exaggerated a number of tendencies which have always been present in the Labor project but which were held in check to some degree by a strong union movement, a disciplined Labor Left and, in the background, the influence of the Communist Party.

There are three factors which are central to Labor’s often shoddy record and its shift to the right—a shift which pulls along with it the formal Labor Left as well as people like Garrett.

Parliamentary democracy
The first is a commitment to change through parliament and, as a consequence, the priority the party puts on winning 50 per cent plus one of the vote. This leads the ALP to pander to lowest common denominator politics and crave respectability.

Outside of revolutionary periods, the mass of the population is politically passive and the mass media has a significant influence on forming the political agenda. The media can demonise concepts like “militant” and “feral” (or “terrorist”, “queue-jumper” or “dole bludger”), stripping them of context or explanation.

Peter Garrett’s environmental activism has a certain marketing attraction for Labor. It helps differentiate their “brand” from the Liberals’ and pull back voters toying with the Greens. But at the same time, Garrett has to show that he is a team player, not a feral.

His willingness to swallow decisions like Four Mile mine, or the Gunns project in Tasmania, demonstrates that Labor is moderate, responsible and has its “wilder” members under control.

The pressure is on Labor to approve more and more uranium mines, at the expense of Aboriginal land and the environment, as the economic crisis heightens the importance of finding ways to kick-start a new minerals boom.

This identification with the national interest is behind Labor’s devotion to carbon trading as a way of dealing with climate change. Like all other governments, Labor is reluctant to take meaningful initiatives that put Australian businesses at a competitive disadvantage.

Labor presents itself to the corporate board rooms that dictate economic policy and the opinion makers like Rupert Murdoch who control the media as a “responsible” government—one that will do their bidding.

Profit is put before the environment and Garrett is trapped by the logic.

Labor will sometimes feel the need to identify with an industrial issue, such as the Maritime dispute of 1998 or WorkChoices. As leader, Kim Beazley addressed mass rallies of striking workers, promising to tear up WorkChoices.

But Labor’s central message since its inception has been that real change comes through the ballot box and the struggles outside parliament are either less powerful, less important or even counter-productive (because they may scare off the middle ground of voters needed for victory).

This approach lends itself to environmental questions, too. Garrett now embodies the argument that his rise from activist to minister means that the movement has now achieved its goal—that he is on the inside, can be relied upon and the movement is now of secondary importance.

Given his record, more and more environmental activists would disagree. But Garrett doesn’t. He is not a liar and probably not even a hypocrite. He is a product of what Karl Marx described as “social being determining consciousness”.

In making the transition from activist to minister, he presumably believed that he would change Labor (and therefore government policy) more than it could change him. But the process of becoming an MP and then a minister brings integration into the party machine, the privileges that promotion brings, separation from grassroots activism, and the demands of managing the 24-hour news cycle, all of which have an impact.

Vere Gordon Childe put it this way in the 1920s: “Possessed of a substantial salary, a gold pass on the railways and other privileges, and surrounded by the middle-class atmosphere of Parliament, the workers’ representative is liable … to think more of keeping his seat.” Today, just change the word railway to airline.

In earlier times, some Labor MPs could escape being totally subsumed by the party’s conservatism. Stronger party branches and greater union involvement could provide a counter-weight. Deeper socialist convictions could provide consolation for a failure to climb the career ladder.

But that space for individual commitment is contracting fast, as Labor’s membership declines, leaving it ever more reliant on television and advertising to get its message across, on opinion polls to get feedback, and big business to give donations.

It would be easy to write off the Garrett experience as a product of personal ambition. But his uranium U-turn fits a long-standing pattern within the ALP that cannot be explained away simply as a series of personal weaknesses.

Generation after generation, Labor has won activists to its ranks by promising “realistic change”. Yet Labor’s fundamental political DNA means that any hope of change is disciplined by loyalty to the party as an effective electoral force and, more importantly, to the national interest.

Solidarity acknowledges those within Labor who continue to stand on principle, such as MP Julia Irwin—a lone voice for the Palestinians, or those who created Labor for Refugees.

But the sorry story of Garrett underscores once again that the real fight for justice, whether on climate, jobs or indigenous rights, has to be fought outside parliament and needs a different kind of party, one that puts loyalty to the oppressed ahead of loyalty to the system.