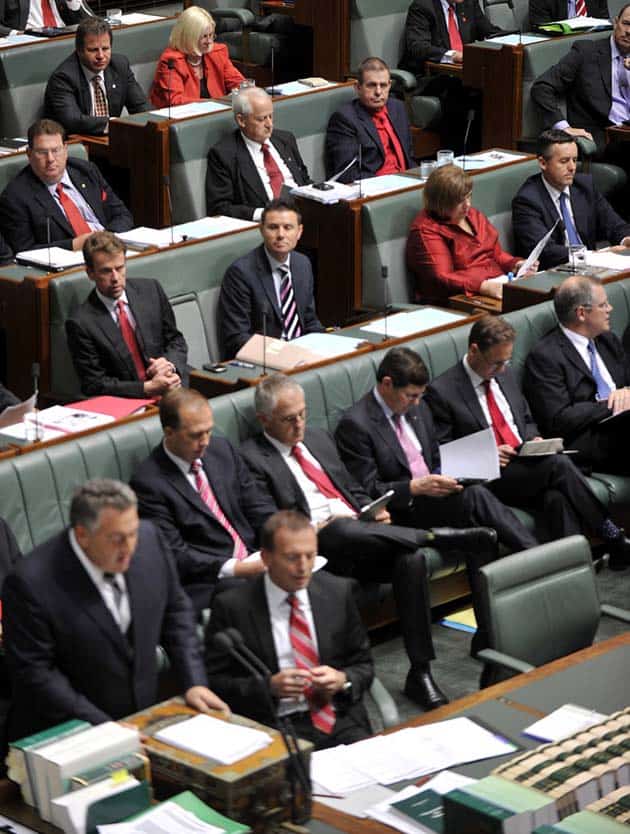 In our democracy the key economic decisions are not open to democratic control, but are made by CEOs and the rich, argues James Supple

Disillusionment with the state of our democracy runs deep. Few institutions are more distrusted. Just 34 per cent of people trust federal parliament, according to an Essential poll in March, compared to 70 per cent for the ABC and 74 per cent for the High Court. Half a million young people aged between 18 and 24, one quarter of the total, haven’t even enrolled to vote.

It’s not hard to understand why. Many people instinctively understand that the major political parties look after the rich, when they aren’t looking after themselves. Just 12 per cent of people think government is run in the interests of “all the people” according to a 2010 election survey.

Democracy in parliament is compromised enough. We get to vote in federal elections only once every three years. In between elections governments can do what they like to ignore the democratic will of the people.

The first budget of any government is traditionally the “horror budget”—the time when it announces its most unpopular cuts to public services, privatisations and attacks on workers. John Howard’s first budget in 1997 was one of his worst. Queensland Premier Campbell Newman adopted a blitzkrieg of program cuts and job cuts in the public service. Three years later governments hope that the anger will have faded.

Even when we do go to the polls it seems there is little choice—with both major parties committed to similar neo-liberal economic management and pro-business policies.

But the real problem is that we have only a narrow form of political democracy. This system has been designed to leave the main source of power under capitalism—the wealth and property of the rich—untouched.

Mining bosses like Gina Rinehart and Andrew Forrest, and multi-millionaires like James Packer and Rupert Murdoch are just the best known representatives of the “1 per cent” identified by the Occupy movement. They include the CEOs and senior managers of the major multinational corporations that dominate the economy. This small minority of society control the vast bulk of the wealth, running the major corporations and enriching themselves further in the process.

The top 5 per cent of income earners took just over 20 per cent of all earnings in Australia in 2010. Wealth, which can be inherited and accumulated over many years, is even more concentrated. There are no accurate figures for how much the top 1 or top 5 per cent of Australians own. But households in the top 10 per cent have almost 50 times the net wealth of those bottom 10 per cent, according to the Australian Bureau of Statistics.

Their control over the operations of the economy makes them more powerful than any government. The ability to cut off new investment and take their money out of the country through “capital flight” gives them the power to wreck whole economies. This was exactly the threat the mining companies held over the Labor government when they announced a mining tax that would take back some of their enormous profits.

Through decisions to close down factories and offices they have the power to throw thousands of people out of work. Jim Cairns, left-wing deputy leader under the Whitlam Labor government recognised this.

The government found, he said, “we have to respond to the needs and demands of the large companies… When the large companies threaten to put thousands out of work we have a choice—we allow them to do it or we transfer millions of dollars from other sections of the community to them in the hope that people can be kept in their jobs.”

Governments have handed car manufacturers billions with this aim in recent years. Ford was given $1.1 billion since 2000. But it is sacking 1200 people and closing its plants anyway. Holden received $2 billion in the same period but is threatening to shut up shop as well, at the cost of another 3500 jobs. Yet at no point has any government been prepared to nationalise the plants if the companies won’t guarantee jobs—afraid of the challenge to big business this would require.

The enormous wealth of the 1 per cent also corrupts even the limited political democracy we do have.

Winning an election requires money—and lots of it. In the financial year of the last federal election in 2010 the Liberals spent $108 million compared to Labor’s $88 million.

It will come as no surprise that the Liberals do well from the corporate elite: for the last election Clive Palmer’s company gave them $300,000, IT millionaire Danny Wallis chipped in $100,000 and the Pratt family’s business empire gave $150,000.

These donations come with strings attached. John Thorpe, former President of the Australian Hotels Association admitted he considered donations worth the expense because it meant business could, “get interviews with ministers… interviews with staffers, and that does help us in our policies and our regulations.”

Big business is not going to donate to anyone who threatens their profits. This means that any party or candidate that stands up to the corporations will face a huge disadvantage compared to the army of professional staff and paid advertising that the pro-business parties can afford to fund.

Then there is the power of the media to contend with. Rupert Murdoch’s News Corporation controls 70 per cent of Australia’s print media, and enforces a viciously right-wing editorial line.

But most media operations are big businesses. Many are owned by conglomerates that also run mining companies and banks—think of Gina Rinehart’s stake in Fairfax and Channel Ten. They will go out of their way to attack and distort the views of anyone who challenges the power of the corporate bosses. Look at the way that the Daily Telegraph and Herald Sun waged war on The Greens over their drugs policy, concocting a bizarre hyped up scare campaign with claims that they wanted to sell drugs like “ice” and ecstasy in an effort to discredit the party. The Australian has been just as open about its desire to see The Greens “destroyed”.

Parliament itself is only one part of the wider state apparatus that confronts any elected government. While a new government might replace the heads of departments in areas of the public service like Immigration, tax or health, beneath them sits a vast bureaucracy of senior managers and officials whose careers outlast many governments.

The upper levels of public service management are built into the structures of power and privilege of the ruling class and serve the same interests. Former General Peter Cosgrove, who ran military operations in East Timor, Afghanistan and Iraq, now sits on the board of Qantas. In April Brisbane’s Courier-Mail detailed how a raft of former senior public servants had moved into jobs in the Coal Seam Gas industry, after formerly working on approvals of new mining developments.

This means that the state bureaucracy has its own agenda, and will work to frustrate government policy if it poses any challenge to the ruling class.

At the core of the state is the armed might of the police and the military. Like the rest of the state, they are led by career officials who identify with the ruling class. If a parliamentary government began to threaten capitalism and the 1 per cent’s control of the economy, the ruling class would not hesitate to use them to overthrow the government if necessary.

This is what happened in Chile in 1973 when Salvador Allende’s government helped spark a workers’ movement that began to threaten capitalism in Chile. After months of encouragement from the ruling class establishment, the military staged a bloody coup.

A genuinely democratic society is only possible when economic decisions and the wealth of society are put under popular control. This cannot be done through taking control of parliament. It requires a mass movement of millions that builds new institutions of popular democracy from below.

Such a democratic process has occurred in many of the great revolutions of the last hundred years. In every case, the struggle for control of the economy was expressed in the fight between new organs of workers’ power and the old bosses and management in the factories and workplaces.

In Poland 1980 Inter-Enterprise Strike Committees sprung up to co-ordinate a wave of factory occupations that went beyond simple wage demands to press for legal trade unions, freeing political prisoners and better health care. In Chile in 1972 “cordones” in the factories organised to stop their bosses paralysing the country through shutting down production, taking control of running many factories into the workers’ hands. The new organs of workers’ democracy formed a parallel government that challenged the old capitalist state for power.

This process went furthest in the Russian Revolution of 1917, where for a short period a workers’ government based on soviets, or factory councils, actually took power.

Revolutionaries are not indifferent to the outcome of elections—we should fight to keep Abbott out of office and welcome a higher vote for The Greens. But it is in the workplaces and on the streets that the struggle for real democracy must be waged, through building mass struggles capable of winning revolutionary change.