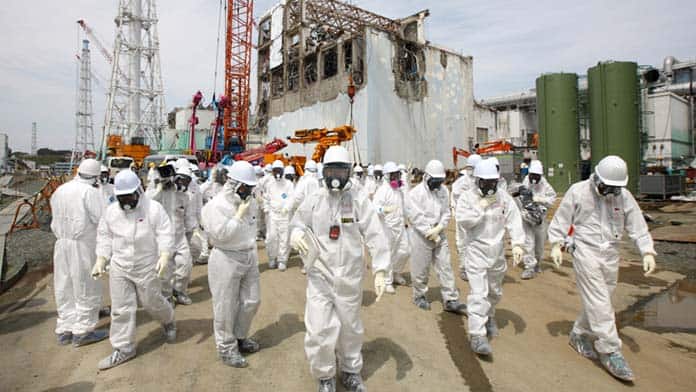 Nuclear power is once again being raised as a solution to the climate crisis. Bill Gates and Warren Buffett are building a new nuclear reactor in the US, while in the aftermath of COP26, French president Emmanuel Macron declared that France will, “for the first time in decades relaunch the construction of nuclear reactors in our country.”

The nuclear submarines the Australian government wants to acquire would each be powered by a small nuclear reactor using highly enriched uranium. This has produced another push to expand the nuclear industry here.

New nuclear power stations could not contribute in time to assist the rapid electricity transition needed.

Introducing nuclear power to Australia, even if the public could be convinced, would take at least 15 years, while taking financial resources away from renewables. Taking into account planning and approvals, construction, and factoring the carbon dioxide used in construction, it would be a 25 years or more before nuclear power could even begin to reduce greenhouse emissions in Australia.

The International Atomic Energy Agency, whose mission is to promote nuclear power stated, “Nuclear power is not a near-term solution to the challenge of climate change. The need to immediately and dramatically reduce carbon emissions calls for approaches that can be implemented more quickly than building nuclear reactors.”

Additionally nuclear energy is not renewable. If nuclear power were expanded to half the world’s current energy supply, known high-grade uranium ores would last less than a decade.

Nuclear energy was born out of the Cold War arms race and the drive for nuclear weapons after the Second World War. Nuclear bombs and nuclear power remain intrinsically linked.

Following the US atomic bombing of Hiroshima and Nagasaki in 1945, by 1947, Britain had two nuclear reactors, not to produce electricity but to make plutonium for nuclear weapons. Nuclear power for civilian use was a spin-off from the needs of the military.

The technology and expertise required to operate a nuclear energy program provides the essential requirements for the construction of nuclear weapons. The arms race after the Second World War saw nuclear weapons spread from US to Russia to Britain, to France and China. “Atoms For Peace” was initiated by the US in 1953 to greenwash nuclear power. Since then, Israel, India, Pakistan, South Africa and possibly North Korea have used civil nuclear energy programs to develop their own nuclear weapons.

Not clean, green or safe

Nuclear power stations run on enriched uranium. The heat from the nuclear reaction is used to create steam, which then drives a turbine to create electricity.

More than one tonne of uranium ore is needed to extract one kilogram of reactor grade uranium. A study done in 2000 found that using low-grade ores, nuclear power releases levels of carbon dioxide equivalent to that of a combined cycle gas-fired power station.

Nuclear radiation is deadly. Exposure to radiation, which happens at virtually every stage of the nuclear fuel cycle, is a health hazard.

The weight of scientific opinion holds that there is no safe level of radiation exposure. Even at low doses there is clear evidence of increased risk of cancer and cardiovascular disease.

It is estimated that between 16,000-93,000 people across Europe died from radiation related cancers as a result of the Chernobyl disaster.

Uranium mining is not safe either.

Every mine has a history of leaks, spills and accidents. A 2003 Australian Senate investigation found the sector is characterised by a pattern of underperformance and non-compliance, an absence of reliable data to measure the extent of contamination or its impact on the environment, and an operational culture that gives greater weight to short term considerations than long-term environmental protection.

Australia has around one third of the world’s uranium reserves and currently supplies around 13 per cent of the global market, exporting around 10,000 tonnes of uranium oxide (yellowcake) each year.

The Hinkley nuclear power station under construction in the UK will cost $36 billion to build. Wind and solar are far cheaper.

While the cost of renewables keeps falling, nuclear is only the energy source that keeps getting more and more expensive.

The CSIRO and Australian Energy Market Operator crunched the numbers in 2020 and found nuclear energy would be far more expensive than current renewables technologies including storage.

Safety costs add an enormous amount to the cost of nuclear reactors. No insurance premium covers the cost of nuclear accidents. The total cost of the clean up after the 2011 Fukushima disaster in Japan, so far, has been estimated at over US$500 billion, while the nuclear power station was insured for only US$1.5 billion.

A 2009 Citibank report, “New Nuclear: The Economics Say No” noted that “the risks faced by developers [of new nuclear plants]…are so large and variable that individually, they could each bring even the largest utility company to its knees financially.”

Aside from risks of leaks, meltdowns, and radiation-caused cancers, every stage of the nuclear fuel cycle, from uranium mining to processing used fuel, produces radioactive waste.

And all radioactive waste is dangerous to human life; even low-level exposure can cause leukemia and other cancers.

One of the most dangerous radioactive isotopes, plutonium-239, with a half-life of over 24,000 years, remains dangerous for half a million years.

Not a single permanent waste repository exists anywhere in the world. The nuclear industry has already created of a toxic mass of waste and pollution.

The safe, long-term storage of nuclear waste remains a problem for both the civil and military wings of the nuclear industry.

Australia has nowhere to store waste from its one nuclear reactor at Lucas Heights.

The struggle against nuclear waste dumps has always been linked with the struggle for Aboriginal land. It took seven years to defeat the proposal to put a waste dump on Aboriginal land at Muckaty station in the Northern Territory. The government is now planning a dump at Napandee in South Australia.

Australia is also a part of the imperialist rivalry that has driven nuclear proliferation around the world.

There is a long history of the Australian ruling class harbouring nuclear ambitions. The Australian government allowed Britain to carry out 12 nuclear tests in Australia between 1952 and 1957. In 1961, then Liberal Prime Minister Robert Menzies wrote to the British Prime Minister Harold Macmillan asking for Australia to be supplied with manufacturing data or “ready-made nuclear weapons.”

The growing tensions with China has spurred Australian militarism and a massive boost in military spending.

In 2019, the right-wing think tank Australian Strategic Policy Institute (ASPI) argued for Australia to build its own nuclear arsenal saying, “It would be easier to build nuclear weapons if we had in place a stronger core of nuclear skills in our workforce, some capacity to produce fissionable materials, and a suitable delivery vehicle.”

Morrison’s recent announcement of the AUKUS pact with the US and the UK, and the deal to acquire nuclear submarines, has again fuelled the push for developing a civilian nuclear industry.

BHP’s vice-president, Fiona Wild, quickly followed the submarine announcement, arguing, “Nuclear power can play a significant role in providing low greenhouse gas emissions power”. It is no coincidence that BHP owns the Olympic Dam mine in South Australia that is the site of one of the world’s largest uranium deposits.

The argument about nuclear power is a complete distraction from the action that is needed to avert runaway climate change. To stop climate change there will have to be a complete transformation of the economy, and how society is run.

Everything about nuclear power is about maintaining the status quo and entrenching the rule of the capitalist class.

Nationals Senator Matt Canavan who called for an end to Australia’s prohibition on nuclear power is at the same time calling for government funding for new coal–fired power stations.

Nuclear power is dangerous. It carries a permanent threat to the lives of workers involved in the nuclear industry, while the threat of nuclear “incidents” like Chernobyl and Fukushima carry the threat of killing hundreds of thousands. More than that, nuclear power is inextricably linked to global imperialism and the military terror of nuclear weapons.

There is a long history of opposition to nuclear power in Australia.

Decades of campaigning against uranium mining and for nuclear disarmament have helped stop the expansion of the nuclear industry here. They have helped cement opposition to nuclear power within the population. Nuclear energy is not green or renewable, and has no role in the climate transition we need.

We have to oppose the purchase of nuclear submarines, as well as any efforts to expand uranium mining or nuclear power in Australia.