The case for socialism 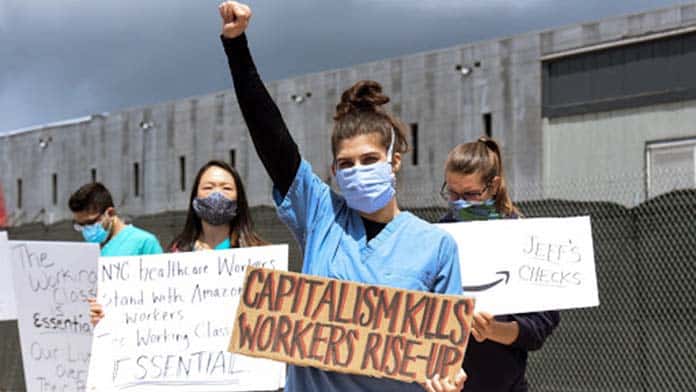 In this extract from his new pamphlet, David Glanz explains what’s wrong with capitalism and the necessity of socialist revolution

The COVID-19 pandemic that spread to almost every part of the world during 2020 was a deadly reminder that the system in which we live is dangerous, unequal and unsustainable.

In Bolivia, police collected bodies in the streets. In New York at the height of the first wave, 766 people were found dead in their homes in just three days.

The pandemic exposed the damage that decades of free market policies in Australia had created. In Victoria, the second wave began when low-paid, under-trained, casual security guards at quarantine hotels took the virus back to their families.

Privately run aged care homes became the centre of deadly outbreaks as casual care workers, often migrant women, worked across different sites without adequate PPE. Suddenly, our rulers “discovered” that millions of workers rely on juggling multiple casual jobs in meatworks, security, health services or cleaning without access to sick pay. Too many faced the choice of working while sick or being unable to pay for food.

In 2020, the world saw the rapid spread of illness and death, loss of jobs, cuts to courses, as well as Black people shot down in the street, Aboriginal deaths in custody and, as a curtain-raiser, the worst bushfires ever due to climate change.

Politicians talk about a return to normal. But under capitalism, these conditions are normal.

Power and wealth are in the hands of a tiny minority at the top of society. In 2020, the charity Oxfam reported that the top 1 per cent of Australians, just 250,000 people, owned more than $2 trillion—22.2 per cent of the nation’s wealth.

We live in an irrational system where decisions are made on the basis of competition and profit, not human need, and where human lives and the environment are seen as expendable.

Growing opposition to capitalism has seen socialism revive in popularity, most notably in the success of Bernie Sanders and other democratic socialists like Alexandria Ocasio-Cortez in the US, as well as Jeremy Corbyn in the UK.

But Sanders and Corbyn both sought to win power through elections in an effort to reform capitalism. They quickly found themselves under relentless attack by the ruling class.

The Democratic Party establishment united to crush Sanders in the party primaries, with other moderate challengers withdrawing in favour of Joe Biden and millionaire donors channelling funds towards Bernie’s rivals. Corbyn—a man who had dedicated his life to fighting racism and improving the lot of workers—was falsely smeared as an antisemite and derided as an unelectable madman.

Both Corbyn and Sanders were cut down without forming government but in Greece the left-wing Syriza party took office in 2015, campaigning against cutbacks and privatisation. It was catapulted into power on the back of five years of working class resistance, including mass protests, riots and 32 general strikes.

Syriza said the best way to end austerity was by getting elected to government. That meant trying to work within the system rather than challenging it, including negotiating a way out of austerity with the international financial institutions of the Troika.

The Troika made it clear that they had no respect for the outcome of the Greek election, offering the Greek government a loan linked to further crippling austerity measures. Syriza held a referendum and ordinary people overwhelmingly voted No. The government could have used this to exit the European Union and refuse to pay Greece’s debts to the banks. But, rather than challenge the status quo, Syriza chose to stay with the Troika and play by its rules. It ended up implementing an even worse austerity plan than the one voters had rejected.

Most people who recognise some of the injustices of society look to winning change through parliament. It is a logic that is common to members and supporters of Labor and the Greens, despite their differences. We live in a democracy, the argument goes, and winning parliamentary seats and ultimately government is the key to power.

But the parliamentary system is a very limited form of democracy. Elections are held only every three or four years, allowing governments to attack workers, students, Indigenous rights and the environment while hoping anger will fade by the time of the next election.

And parliament is only one part of the power structure in Australia. The ruling class have many other options at their disposal. Capitalists, not MPs, decide whether investments are made or whether workplaces close at the cost of thousands of jobs.

Any government that tries to encroach too far on to the power and privileges of the ruling class will be brought into line. The mass media will bring down a hailstorm of attacks, lies and abuse. The banks will withhold credit to bring the economy to a temporary halt. Money will flow out of the country. Big employers will threaten to take operations offshore.

The ruling class will accept parliamentary rule when it complements their economic power but sideline or dispense with it when it doesn’t. The left-wing government of Salvador Allende in Chile promised a parliamentary road to socialism. In 1973 the military carried out a coup and instituted a dictatorship under General Pinochet, murdering thousands. The rich and powerful will tolerate all kinds of vile dictatorship and suppress all or any rights to maintain their control.

This means socialism is only possible through revolution. Marx and Engels argued that such a revolution must be driven by the actions and support of the majority of the working class. Workers must be prepared to use force against the violence of the old order while seeking to win such overwhelming support that the potential for violence is minimised.

Workers are the class with the greatest power to bring the system grinding to a halt. When they strike they paralyse production and hit the flow of profits to the capitalists.

The possibility of revolution has been shown again and again at high points of workers’ struggle over the last 150 years.

During numerous upheavals workers have taken over and begun to run their workplaces themselves, forming workers’ councils to link workplaces together. These councils, formed out of the struggle to defend workers’ wages and living conditions, begin to take basic decisions about running society into their own hands.

In any mass strike against the government, the workers’ movement itself becomes the arbiter of, for instance, whether to keep the power running for hospitals, public transport or other emergency services. The movement also faces the problem of continuing to feed people, even as strikes shut down supermarkets, delivery services and food production. This new form of direct democracy, therefore, has the potential to take power into its own hands.

This is what happened in the Russian revolution of October 1917—the one time in history so far that the working class has taken national power. The October revolution was carried through with little fighting. In the capital St Petersburg, the pro-capitalist government collapsed without a trace as workers, soldiers and sailors claimed control of the city. There was no one left to fight for the old order.

Tragically, the revolution lasted just a few short years. Stalin established a new dictatorship after the revolution was strangled through the pressure of civil war, economic collapse and the disintegration of the working class that had taken power in 1917.

But the rise of similar organisations of mass control has happened many times since. In Chile, in the last months of 1972 and early 1973, delegates from factories in the industrial belt of the capital Santiago began to play a somewhat similar role, in committees known as cordones.

The experience was repeated in the Polish city of Gdansk in 1980. Workers occupied a shipyard to resist the sacking of a female activist and to demand improved wages and conditions. Workers in 250 other workplaces joined in and together they created a delegate body, the “Inter-enterprise strike committee” or MKS.

When workers link arms in struggle, they also begin to challenge entrenched ideas. In the Egyptian revolution of 2011, oppressed groups were central to the struggle. Before the revolution sexual harassment against women was endemic in Egypt. But this changed during the revolution, as Egyptian revolutionary socialist Gigi Ibrahim reported at the time. “From the beginning of the revolution, and throughout the 18 days I spent in Tahrir Square [in central Cairo], I did not face sexual harassment once.” In Tahrir Square, women, men and children slept in tents next to strangers, sharing food and water. Christians, Muslims, Jews and atheists, people wearing niqabs, hijabs or no religious coverings, stood in unity. When workers fight for, and take, state power, the process of change is profound.

Revolutionary situations are more common that most people think. Over the past century there have been revolutions or mass uprisings in dozens of countries.

What was the difference between all these revolts and the October 1917 revolution? Only in Russia was there a revolutionary party with mass working class support, willing to lead the struggle and prepare for insurrection.

Revolutionaries need to be part of resistance to sexism and racism and of campaigns for social and environmental justice. Above all, revolutionaries try to mobilise workers’ power behind these campaigns, to demonstrate in practice that workers have the power to bring change.

Solidarity is still a small group. We need a bigger organisation of revolutionary socialists with members on campuses and workplaces across the country who can be at the centre of every struggle, putting the case for socialism. Join us.

Reforming capitalism is not the same as socialism, argues Sadie Robinson. Another society is possible—but can only come about through a revolution by working class people

Eliot Hoving continues our series on socialism, arguing that international revolution is both possible and necessary

What can human evolution tell us about human nature and the possibility of social change, asks Penny Howard THERE IS a common-sense belief that it is impossible...