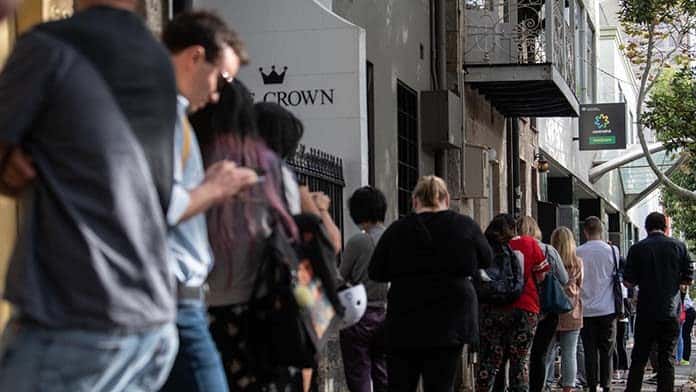 While Scott Morrison’s budget has handed tens of billions of dollars to business in tax breaks and wage subsidies, workers will be expected to sacrifice to deliver any economic recovery from the pandemic.

There are now almost one million unemployed, and another 200,000 who have stopped looking for work altogether. Yet JobSeeker payments have been slashed.

Treasurer Josh Frydenberg says unemployment won’t fall below 6 per cent for at least another two years, but the Liberals are determined to maintain the status quo and protect profits. So aged care homes will left in private hands while the government refuses to provide the money needed for more staff and qualified nurses.

Despite spending gigantic sums, the Liberals have ignored the enormous social need in aged care, childcare, health and the transition to a carbon-neutral economy. The billions going to the bosses could have funded climate action and created hundreds of thousands of jobs to fund renewable energy, but Morrison is wedded to fossil fuels and his illusions of a “gas-led recovery”.

Childcare services were briefly made free, for those that needed them while the country was under lockdown. But the Liberals have been completely unwilling to extend this.

The JobKeeper wage subsidy is being wound back, disappearing altogether next March. JobSeeker payments have already been cut, and are set to be cut back to pre-COVID poverty levels of just $40 a day in December.

While Labor waved the government’s business handouts through parliament, Leader Anthony Albanese has re-positioned Labor in the wake of the Morrison’s budget. Albanese is promising to spend $6.2 billion expanding childcare subsidies, and to “investigate” funding 90 per cent of the costs for everyone.

However Labor, too, has been careful to appeal to business, stressing that its child-care proposal was a “substantial economic reform” that would “boost productivity” for the bosses.

Albanese also gestured towards action on climate change, saying Labor would fund an overhaul of the electricity grid to accommodate renewable energy. It is a small shift from Labor, but it is a far cry from the action that will be needed to drive a rapid transition to renewable energy, transport, buildings and land management.

Morrison is also preparing new workplace legislation to provide further “flexibility” for employers to drive down workers’ conditions and boost profits. His vision for economic recovery is based on the capitalist dream of forcing workers to accept lower pay and more casualisation.

Despite months of roundtable discussions between employers and the ACTU, the government is now determined to make its own decision on what will be include in the new workplace laws.

Morrison’s appalling attack on the MUA over its dispute with Patrick is an indication of what he is planning.

Although the MUA was in a bargaining period for a modest wage increase and defence of existing conditions, Morrison lied about ships being held at sea and accusing the union of, “engaging in a campaign of extortion… in the middle of a COVID-19 recession”.

University staff have been among the worst affected by the COVID recession. So far nearly 12,500 staff have been sacked, almost 10 per cent of the workforce. The cuts are still coming, but the union leadership has done little to fight the jobs massacre.

The push for the NSW NTEU post-budget rally on 13 October came from the rank and file. It was small, but it was a step forward—and won authorisation in the Supreme Court so police could not issue fines.

Student protests against cuts at Sydney University have defied the police, despite one activist being charged, and over $50,000 in COVID fines. There was widespread criticism of the police after they assaulted a law professor who was there as a legal observer.

Defiance and the push for the right to protest have won some concessions. NSW regulations now allow COVID-safe protests of up to 500. Students and unions will need to seize the opportunity to get back on the streets and organise even more significant protests.

Staff and student action can stop the cuts. At Macquarie Uni, plans to axe the Gender Studies major were reversed after an outcry and campus demonstrations. A number of history courses at Sydney Uni were saved following protests before the start of semester.

But it will take action on a much wider scale, involving larger numbers of students and staff, to reverse the campus cuts and force Morrison to deliver higher funding. This means planning for strike action in defiance of the law.

We need to fan every flame of resistance to Morrison and his corporate agenda. Larger protests of staff and students can build momentum and confidence and point to the kind of fightback that will be needed as the economy slumps deeper into recession.

Editorial: Stop Morrison’s cuts—it’s time to fight for jobs, and for the right to protest