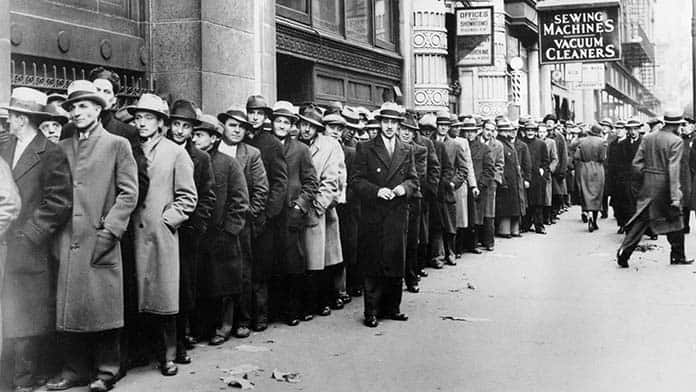 In the face of the worst economic crisis since the 1930s, the example of Franklin Delano Roosevelt’s New Deal is being touted as a possible solution.

The New Deal was a series of policies designed to revive US capitalism through reform of the finance sector, public works programs, unemployment relief, and support to business.

Progressive Democrats like Alexandria Ocasio-Cortez and Bernie Sanders have called for a Green New Deal, as have the Australian Greens, to tackle both the climate and inequality crises. In the UK even Boris Johnson has described his promise of increased spending on infrastructure as a “New Deal”.

Government spending to create jobs will be needed on a large scale to address the economic crisis triggered by COVID-19.

But there are a lot of myths about the New Deal that miss some important lessons. The scale of the economic devastation alone didn’t prompt Roosevelt to introduce programs to benefit working class Americans.

It was just as much a response to an explosion in class struggle, offering reforms in order to “obviate revolution”, as Roosevelt (FDR) put it.

Prior to his election in 1932 FDR showed little sign of wanting to bring serious change. He was a fiscal conservative.

In the election campaign Roosevelt sent mixed messages, at times condemning the rich and calling for a reduction in poverty, at others criticising President Hoover for spending too extravagantly.

Roosevelt’s actual policies differed little from Hoover’s. He won because Hoover had presided over the beginning of the Depression and was seen as ruling for the rich. Hoover opposed unemployment relief for the poor, but spent millions bailing out business.

Hoover’s fate was sealed when he ordered the army to violently clear out unemployed First World War veterans protesting for bonus payments in Washington.

When Roosevelt took office in 1933 one of his first acts was introducing the Economy Bill, an austerity program which slashed public sector pay and veterans’ benefits.

During the Depression the US economy shrank by a third, wages dropped by 60 per cent and 13 million were unemployed. Hundreds of thousands of homes were repossessed, rendering millions homeless. Thousands in the richest country on earth starved to death.

Bitterness and anger began to explode. Unemployed workers led by the Communist Party defended tenants against eviction across the country. There were strikes and food riots that led to deadly clashes with state and private police.

Roosevelt was forced to acknowledge that unless the government acted to relieve workers’ desperation, capitalism was at serious risk.

A key piece of New Deal legislation was the National Industrial Recovery Act, introduced in June 1933. It facilitated the creation of enormous cartels, exempt from anti-trust legislation, with the aim of boosting corporate profits.

But one part of it—Section 7a—gave an enormous boost to the working class. It said simply, “employees shall have the right to organise and bargain collectively through representatives of their own choosing.”

This was only intended to be a token concession (and Roosevelt opposed its inclusion). But, as the American Federation of Labor reported, it sparked, “a virtual uprising of workers for union membership.” Many believed that their right to join a union had been guaranteed.

The United States had been a deeply hostile environment for unionists. Workers faced the combined might of police, military and private company police hired to spy on and in some cases murder labour activists.

This resulted in union membership dropping to 9.3 per cent in 1929. The “open shop”, or non-union workplace, seemed unassailable.

The national union federation, the American Federation of Labour (AFL), refused to organise unskilled workers and supported racial segregation. It proved incapable of using the surge towards the unions to extend union influence.

But in 1934 three explosive strikes, all led by the radical left, turned the tide for the working class.

The Auto-Lite strike in Toledo won union recognition and wage rises following thousands-strong pickets and pitched battles with the National Guard. AFL leaders advised strikers to put their trust in the government. But with support from the American Workers’ Party, militancy and organisation won the dispute.

Minneapolis was a notorious open shop city. A group of truck drivers (“teamsters”) set out to unionise the industry, led by a small Trotskyist group.

During their strike truck drivers had to form militias to defend themselves in pitched battles with company thugs and police—and won.

In San Francisco former Wobblies, supported by the Communist Party, began organising and led a strike on the docks. Solidarity strikes by truck drivers escalated into action that forced union officials to support a general strike. The settlement saw dockers win union control of the waterfront.

There were key lessons from these strikes. Workers who listened to their union leaders and trusted Roosevelt to deliver for them were bitterly disappointed. Without a sustained fightback, employers ignored the new laws with impunity.

Success only came through rank and file organisation and taking action independent of union officials.

The wave of struggle produced a split in the union bureaucracy, with the formation of the Congress of Industrial Organisations (CIO), committed to using militancy to extend union organisation, but under the control of union officials.

With his eyes on re-election in 1936, Roosevelt turned to the left and embarked on more far-reaching reform, in what became known as the “Second New Deal”.

The welfare measures introduced by FDR compared poorly with those in Europe. They excluded vast swathes of workers, especially black workers. And the legacy of his administration’s decision not to introduce health insurance echoes on today.

These measures gained Roosevelt massive support from workers and unions, while the majority of the ruling class condemned him.

In a 1936 speech Roosevelt famously said that the rich were, “unanimous in their hate for me—and I welcome their hatred.”

But Roosevelt resented the fact that the ruling class couldn’t recognise that he was trying to protect them. He defended his policies as being necessary for the survival of capitalism, describing himself as, “the best friend the profit system ever had.”

He warned that without reforms the US would face a growing wave of class struggle, like the factory occupations in France in May-June 1936.

Again, it took an escalation in class struggle to gain the benefits.

In 1936 workers in the Ohio rubber industry pioneered a new tactic: occupying workplaces through the sit-down strike.

A key event in the sit-down movement was the victorious strike at General Motors in Flint, Michigan. GM was the biggest corporation in the world at the time, and had successfully resisted unionisation through a regime of terror by company spies and guards.

Police and company guards laid siege to the plant, but workers had prepared the factories like fortresses with metal sheets boarding up windows, and used firehoses and other objects to repel the police. Mass pickets and provision of food for the strikers kept up morale inside the plant.

According to a Michigan Communist Party leader, the strike won through a, “combination of an inside strike with an outside mass mobilisation.”

The victory at GM inspired other workers to use the new tactic.

Sit-down strikes mushroomed across the country. Workers in workplaces as diverse as restaurants, hotels, tobacco, transport, Woolworths and cinemas deployed the sit-down strike in early 1937.

Roosevelt didn’t support the strikes, preferring that workers leave the determination of their conditions to the government.

When 18 workers fighting to organise the steel industry were massacred by police and vigilantes in 1937 Roosevelt declared “a plague on both your houses”.

With the election out of the way and Roosevelt confident that the economy was on a path to recovery, he saw it as the right time to balance the budget. Cuts to government spending triggered another sharp recession.

Mass layoffs ensued and after years of advance the American working class was forced onto the back foot.

The administration reintroduced some social programs and other spending, but unemployment remained at 17 per cent in 1939.

Public spending on the scale of Roosevelt’s New Deal could start to address the combined crises of unemployment and climate change we face today. We need the government to create jobs in renewable energy and reverse privatisation to guarantee affordable electricity.

But would a modern-day New Deal return the economy to health? Government spending during recession does cushion the blow of economic crises.

However, the US economy only returned to health when the demands of the Second World War created a new boom.

To build a society that provides for human and environmental need we need to break from the logic of capitalism.

The New Deal reinvented the Democrats as a home for progressives.

Bernie Sanders is predicting that Joe Biden will be “the most progressive president since FDR”. But in the 1930s workers couldn’t rely on Roosevelt. Today workers and anti-racists can’t rely on Biden or Kamala Harris.

A key lesson of the period is that progressive change and improvements to workers’ lives only come about as a result of mass grassroots resistance, above all strike action.

It’s these movements that offer hope for an exit from the converging crises of climate change, pandemic and economic collapse.