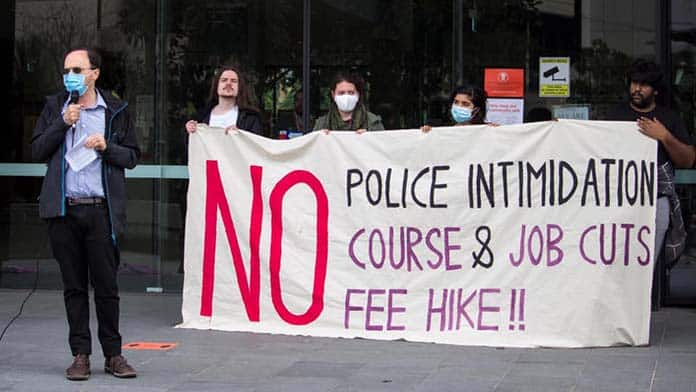 Scott Morrison is determined to wind back government support for workers and the economy, even as COVID-19 outbreaks continue, while companies cut jobs and unemployment climbs.

JobKeeper payments will drop to $1200 a fortnight from October and $1000 in January—just two-thirds of the minimum wage, with even less going to casual employees who worked less than 20 hours a week before the pandemic.

The government itself admits effective unemployment will increase to over 13 per cent by December, as Qantas added to the jobs massacre, announcing the outsourcing of 2500 ground staff jobs.

Even after its extension into next year, the JobKeeper program will still cost $30 billion less than the government initially budgeted for. Yet childcare workers have already been cut off, including those stood down due to the lockdown in Victoria.

The savage cuts across universities are a taste of Morrison and Frydenberg’s Margaret Thatcher-inspired approach to reviving the economy.

Morrison claims his focus is saving jobs. Yet he has ruthlessly imposed huge job cuts on the university sector, refusing to allow universities to access JobKeeper payments and ruling out any extra financial assistance.

Thousands of job cuts have been announced, including 500 jobs at UNSW, 450 at Melbourne University, 350 at RMIT, 250-500 at UTS, 200 at UNE and 190 at Victoria University. Sydney University has floated plans to cut 30 per cent of jobs in the Faculty of Arts and Social Sciences and other faculties, amounting to 3000 jobs if applied across the board.

This will mean widespread course cuts and more use of recycled online lectures, another nail in the coffin of critical education.

The ACTU is clearly worried about where the government is heading, outlining “threshold issues” it would oppose.

But they have accepted Morrison’s compromise that extends employers’ flexibility to cut workers’ shifts, even after they go off JobKeeper, as long as their business has still lost 10 per cent of income compared to before the crisis.

The ACTU is still opposing any deferral of the increase in compulsory superannuation, as well as adopting proposals that reduce workers’ rights from the governments’ industrial relations “working groups”.

But all we’ve got from the ACTU is yet another advertising campaign.

The workers at Woolworths in Wyong, NSW have shown how to fight back. They faced down a lockout from their multi-billion dollar employer, effectively staying out on strike for almost two weeks. Their action won big pay rises and more permanent jobs.

The cuts at universities need the same response. Students and staff will need to build towards mass walkouts, strikes and boycotts of classes. This will mean defying the COVID-19 inspired attack on the right to protest.

Even small protests have shown that it’s possible to stop cuts. Students and staff at Sydney Uni saved a number of courses in the history department by exposing management’s plans and holding protests during the semester break.

Although the university bosses cry poor there have plenty of options to avoid cuts—such as borrowing against university assets and trimming obscene management salaries. Interest rates are at records lows, so they could easily manage repayments.

The cuts at universities are just the beginning of the austerity Morrison plans to impose to maintain business profits as the economy crashes.

Forty-two thousand jobs have already gone in the retail sector, and up to 205,000 construction jobs are estimated to go by March next year.

Morrison still prattles about returning to business-as-usual, “on the other side” of the pandemic. But it is the profits-first priorities of capitalism that have put so many lives at risk and made every element of the COVID crisis worse.

There was a crisis in aged care well before the pandemic, caused by under-funding and cost-cutting.

Now casualisation, lack of training, preparation and resources is taking a terrible and unnecessary toll in aged care homes.

Household income had been flat for six years before the economy slumped into recession.

Universities already had massive levels of casualisation, up to 72 per cent at Melbourne and Monash Universities. Morrison and Frydenberg have a vision of warmed-over Thatcherism “on the other side”.

A determined fightback in the universities can help build the basis for the sustained fight that will be needed to stop Morrison and the bosses making workers pay for the crisis.