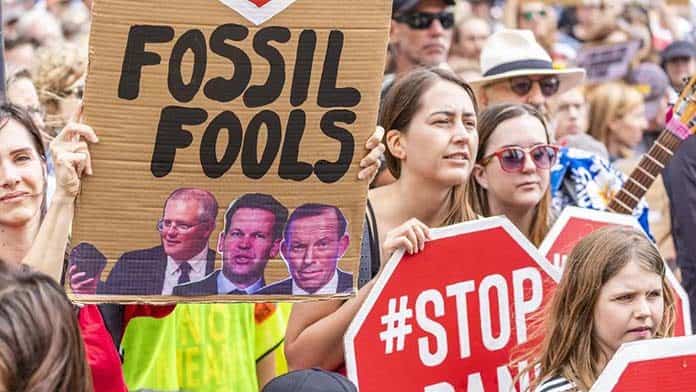 The Liberals are in chaos as they head for a crushing defeat at May’s federal election. The reopening of parliament delivered further humiliation for Prime Minister Scott Morrison—and a win for the refugee rights movement over the medical transfers bill.

While the country has suffered a summer of extreme heat, bushfires and floods, Scott Morrison refuses even to utter the words climate change.

Globally, last year was the fourth hottest on record, behind only 2016, 2017 and 2015. This year, Australia has seen record breaking heat including Adelaide’s hottest ever day of 46.2 degrees in late January.

Rivers in NSW have dried up in the drought, killing millions of fish and leaving towns without drinking water. Tasmania has been consumed by bushfires of a kind rarely seen before the last decade. Climate change is threatening the existence of wilderness areas there that will never recover if they burn.

The government is prepared to spend $50 billion building 12 new submarines, but refuses to spend a cent on the renewable energy transition we need to avert climate catastrophe.

The Coalition is packed full of climate deniers determined to keep coal power stations running for as long as possible. It was Morrison himself who proudly waved around a lump of coal in parliament.

It has even allowed the Vales Point coal power station in NSW to apply for money that would extend its life under the government’s Emission Reduction Fund, money that is supposed to go to tackling climate change.

But they panicked and shut down debate in parliament when The Greens moved to amend their new “big stick” electricity legislation to stop them funding new coal power stations.

The Liberals are growing increasingly desperate, resorting to scare campaigns and hysteria against Labor on tax, the economy and refugees. But their hypocrisy is astounding.

The Coalition has spent $160,000 of taxpayers’ money running a parliamentary inquiry into Labor’s franking credits plan. Not only is this is a blatant misuse of parliamentary resources for a Liberal Party attack campaign, but Tim Wilson, the Liberal MP running the operation, also collaborated with multi-billion dollar investment firm Wilson Asset Management to turn the hearings into a Liberal election stunt.

He even arranged the inquiry’s schedule to align with the company’s “roadshow” sessions so they could march their clients over to protest against Labor outside the hearings. All this shows just how much the Liberals are working for the 1 per cent at the top of society.

We need to get the Liberals out. But it’s not enough to just wait and vote to get rid of them. Action now will shape the period ahead.

We need further union stopwork rallies before the election. Melbourne’s mass demonstration of tens of thousands on 23 October helped to deliver a thumping win for Labor in the Victorian election. Yet we are still waiting for the union leaders to call similar rallies before May’s federal election, or the March state election in NSW.

Large demonstrations can make it clear to Labor that we will fight to “Change the Rules” and prepare the ground to win far more than what Labor is currently offering. Labor is yet to commit to union demands for any form of industry-wide bargaining or removing restrictions on the right to strike.

High school students are showing the way, calling a second Strike for Climate on 15 March.

University students and some unions have announced they will join them.

This needs to be the start of a movement that fights for the real action we need—like the students’ demand for 100 per cent renewable energy in ten years.

The refugee rights movement will also hit the streets in April for the Palm Sunday rallies.

This can help counter the Liberals’ lies and scaremongering about refugees. Morrison’s claims that refugees on Manus and Nauru coming here for medical care could be criminals could have come from the mouth of Donald Trump.

After more than five years, it’s time to bring everyone here.

Yet Labor is still committed to maintaining offshore detention. And it accepts the Liberals’ boat turnback operation, refusing to stand up to the Liberals’ racist fear campaign about refugees—so it’s up to the grassroots movement to counter their lies and prepare to fight on after the election.

The strength of the grassroots struggles will determine whether we can win real change.

We need socialist organisation to strengthen each fight and build a challenge to the capitalist system as a whole. Join us and help to fight for a world run in the interests of ordinary people and the planet.