Why do the union leaders back Labor? 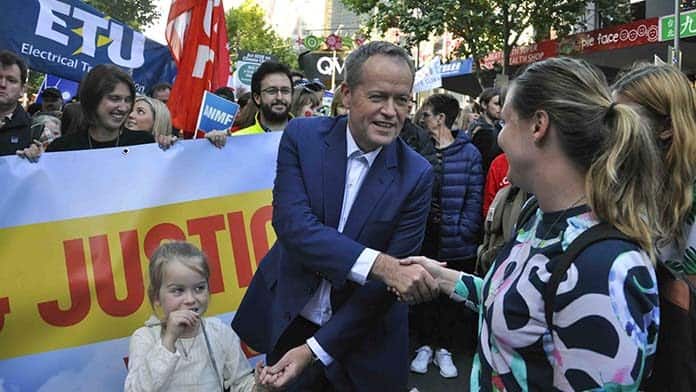 Union leaders see the Labor Party as a vehicle for their interests in parliament, argues David Glanz, even though Labor ultimately governs in the interests of capitalism

When the ALP’s 48th national conference opens in Adelaide on 16 December, about half of the 400 delegates will be from affiliated unions. Many delegates elected from among the party’s individual members will be union activists, too.

The union movement and the ALP are tightly interwoven. Former ACTU Presidents who have gone on to be federal MPs include Bob Hawke, Simon Crean, Martin Ferguson, Jennie George and Ged Kearney. About half of the ALP caucus are former union officials.

Yet there’s a considerable gap between what unions want from Labor and what the parliamentary party is prepared to promise—whether on Change the Rules, the Trans-Pacific Partnership (TPP) or refugee policy.

How should we understand the relationship between unions and Labor? Which is the tail and which is the dog?

The starting point is to understand that the ALP was born of workers’ defeat. It represented an attempt by union leaders to claw back through political means the influence that direct action no longer seemed capable of delivering.

From 1890 to 1894, with the economy in deep crisis, the ruling class went on the offensive. As one historian noted: “Within the space of three years the colonial unions had conceded almost every major concession won from the capitalist class to that date.

“The national confrontations between the unions and capitalist organisations involved all sectors of production. Seamen, waterside workers, shearers, coal miners, silver-lead miners, transport workers, were all locked out by their bosses.

“Police and military actions were used, thousands of special constables were sworn in and detachments of light horse brought out from the barracks.”

The union officials responded by turning away from industrial action to political action.

This in one respect was a step forward—it recognised that the working class had distinct interests and needed to organise separately from the boss class.

But from the beginning the officials made it clear that they wanted gradual reform and that they had no intention of challenging capitalism.

William Spence, leader of the Australian Workers Union, saw the Labor Party as, “introducing co-operation instead of competition… not because we are going to abandon the principles that guided men in the days of the old unionism” but because, “we must unite on the common platform when we speak, and when we vote for reforms that are necessary”.

The second thing to understand is the relationship between the parliamentary Labor Party and its affiliates and members.

Officially, the party’s policy is set by its national conference where, as we have seen, union officials would have a majority if they united.

Labor’s constitution says the parliamentary party’s decisions should be shaped by, “taking such action which may be possible to implement the Party’s platform” and should not contradict the platform.

But the reality is different, for two reasons.

The parliamentary party has an immediate interest in maximising the vote, to keep their own seats and privileges. This often means acting against party policy to please the media or the bosses.

When the Victorian Labor government smashed the Builders Labourers Federation in 1985, the Premier, John Cain, thumbed his nose at the party conference, which passed resolutions condemning the attack.

“So despite the oft-repeated phrase that Conference is supreme and decides policy, in effect, when the crunch comes, if the government is right… it can hold sway against Conference.”

The second reason is that the parliamentary party’s over-riding concern is the “national interest”—in other words, the interests of Australian capitalism.

This commitment—hard-wired into the ALP from the days of Spence and “co-operation”—is so strong that it can lead the ALP leadership to take decisions that result in it losing votes.

The Labor government of James Scullin took office a week before the 1929 Wall Street Crash that heralded the onset of the Great Depression.

On the advice of the bankers, Scullin cut government spending (including welfare) by 20 per cent and wages by 10 per cent and increased taxes—as unemployment rose towards its peak of 32 per cent.

Similarly, in 1949, the government of Ben Chifley—who, as a railway worker, had been victimised for striking in 1917—sent in troops to break a coal miners’ strike.

His Immigration Minister, Arthur Calwell, called the strikers scum and pledged: “We will run up the Australian flag and it will cover Australian servicemen mining coal in Australia for the Australian people.”

But it’s not all one-way traffic. Union officials also have a number of ways they can discipline Labor (although never to the point of a fundamental challenge to the system).

Unions—including those not affiliated to the party—donate significant amounts to Labor.

If officials want to show their displeasure, they can limit donations or give money to Labor’s rivals (Greens, Katter, Victorian Socialists, etc). Sometimes they disaffiliate, only to return when the party’s position changes.

The AMWU recently spearheaded a campaign to punish Labor for giving too much ground on the TPP—in particular, for allowing what it regards as too many workers to enter the country on temporary visas.

National Secretary Paul Bastian said the union had made it clear to Labor that this was a threshold issue for its continued support of party candidates and campaigns.

The union stopped the flow of funds and in-kind support and threatened to protest outside an ALP event.

Labor refused to change its TPP vote but promised that future free trade deals would be subject to a range of considerations including labour market testing, which was enough for the AMWU to declare victory and reinstate its support.

What is important here is not so much the detail but the way that the episode highlights the pragmatic deal-making between union officials and the ALP, who, however much they quarrel, are very much partners.

The ANMF, which is not affiliated, is hosting phone banking operations of up to 350 ALP members and supporters at a time.

The ACTU’s Change the Rules campaign is a positive step in mobilising workers.

But it is strategically entirely subordinated to the aim of returning a Shorten Labor government. Union officials are largely pessimistic about the chances of winning reforms any other way.

The result is that the ACTU is raising only those demands that it thinks the ALP might be prepared to deliver. Issues like the right to strike are quietly dumped in the too-hard basket.

So the relationship between union leaders and Labor is a complex one.

The ALP looks to the union movement for funding (although business also contributes heavily) and even more importantly, for an army on the ground that can significantly boost its election campaigns.

In return, the party knows it has to offer some prospect of the laws changing—for instance around penalty rates or abolishing the ABCC. How much Labor offers is carefully calibrated to offer union officials the minimum acceptable while avoiding a ruling class backlash.

On the other hand, union leaders have looked to Labor for more than a century to bring about reform through parliament.

For leaders on the right of the party, such as those from the SDA, this is pretty much the totality of their strategy.

For leaders on the left, there is occasionally a willingness to take on Labor, industrially or politically. So in Victoria, the RTBU struck twice for its Metro train EBA and then moved a right to strike motion at the state Labor conference.

But all union leaderships are united by a desire to see Labor elected. They share an approach that minimises potentially embarrassing demands before elections in the hope that the ALP can be lobbied once in office.

We are all desperate to see the end of this racist, reactionary anti-worker Morrison government.

However, history shows that Labor is prepared to sacrifice workers’ interests if it thinks that will help the viability of Australian capitalism.

The task for socialists continues to be to encourage independent activity by workers, to fight the Liberals until the last and to make it clear to Labor that if they do not deliver, we will continue the fight with them, too.