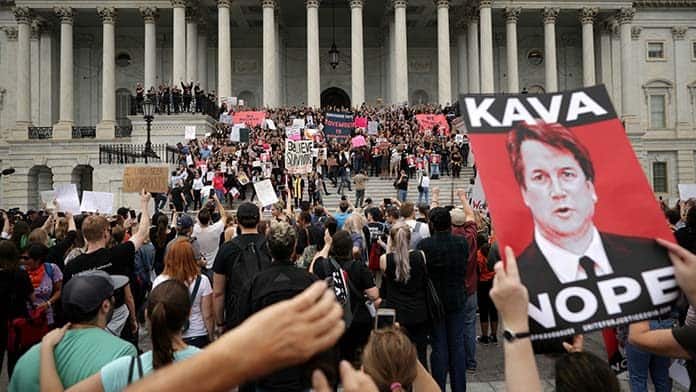 Donald Trump’s nominee, Brett Kavanaugh, has been confirmed to the Supreme Court despite multiple allegations of sexual assault against him.

Professor Christine Blasey Ford gave public testimony saying he sexually assaulted her at a high school party in the 1980s.

Two other women, Deborah Ramirez and Julie Swetnick, have also accused him of sexual assault and involvement in gang rapes at parties at high school and university.

US Republican Senators rushed his approval through so that they could vote before mid-term elections, where they face the prospect of losing their majority.

Trump, who has himself admitted to sexually assaulting women, defended his pick by trying to stir up the sexist base of his party and belittle survivors of sexual assault. He declared it was, “a very scary time for young men in America, where you can be guilty of something you may not be guilty of”. He also mocked and imitated Blasey Ford in a campaign-style rally in Mississippi.

Republican Senators released uncorroborated claims about Julie Swetnick’s sexual history in an effort to discredit her.

Shockingly, most of the Senators dismissed the allegations as having any importance in stopping Kavanaugh’s elevation to the highest court in the country. “We got a little hiccup here with the Kavanaugh nomination”, Republican senator Dean Heller of Nevada said. “We’ll get through this and we’ll get off to the races.”

The whole episode has been a naked grab for power, as the right attempts to stack the US Supreme Court with judges trusted to deliver the decisions they want on issues like abortion and union rights.

The legitimacy of the court, one of the key institutions of the US state, has been seriously damaged. This shows that the idea it is an impartial institution that stands above politics is a myth.

The Supreme Court interprets the rights contained in the US constitution, which makes it a powerful body. Among its key decisions are the ruling in Roe v Wade in 1973 that gave women limited rights to an abortion, and its 2015 decision granting the right to equal marriage.

Kavanaugh’s confirmation means there is now a conservative majority on the court that could overturn a swathe of previous rulings. Appointments to the Supreme Court are for life.

Kavanaugh is a well-known opponent of progressive Supreme Court decisions. He worked as a senior official for George W. Bush during his presidency. He has publicly questioned the decision in Roe v Wade, and as a lower court judge ruled that an undocumented migrant who had been raped had no right to an abortion. Fortunately his view was not shared by other judges on that case.

Kavanaugh’s testimony before the Senate Judiciary Committee exposed him as part of a world of self-entitled wealth and privilege. Former classmates accused him of trying to lie his way onto the Supreme Court as he defended himself by saying he did not drink to the point of blacking out at high school.

Several of his college friends say this is hard to believe, given how often they saw him heavily drunk at parties.

His school was notorious for a culture of binge drinking, sexism and treating women as sexual objects.

Kavanaugh also studied at Yale, another bastion of the US elite, a fact he made sure to mention four times in testimony before the Senate.

There have been protests across the US against his nomination. In New York 3000 people marched on the Yale Club, and there were walkouts from university campuses, schools and other workplaces in response to call from the Women’s Strike organisers.

Protesters descended on Washington, repeatedly disrupting the confirmation vote in the Senate and marching to the Supreme Court.

The Democratic Party hopes to channel the anger into voting in the mid-term elections in November. But they decided not to fight Kavanaugh’s nomination publicly, or to back the demonstrations across the country that were the only chance of building enough pressure to halt the process.

The success is pushing Kavanaugh onto the Supreme Court is a real blow against women’s rights, unions and the fight against racism.

But the battle against the right and the new conservative Supreme Court will have to be fought in the streets, not by relying on electing more Democrats to Congress.