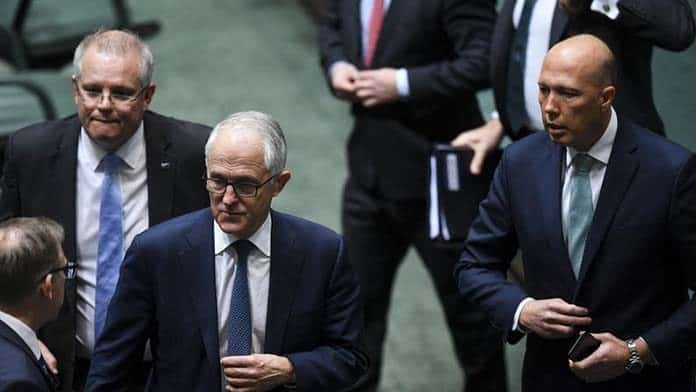 The knifing of Malcolm Turnbull has only further damaged and destabilised the Coalition. Their defeat at the election now looks almost certain.

Installing Scott Morrison as Prime Minister has only seen the government’s support drop even further. They now trail Labor by a humiliating 44 to 56 per cent in Newspoll.

Even Morrison can’t explain why his party dumped Malcolm Turnbull, describing it as “confusing and bewildering”.

A backlash in Wentworth at the by-election caused by Malcolm Turnbull’s resignation could see the Liberals lose the seat. This would strip them of a majority in parliament—causing more headaches for Morrison.

The leadership change has done nothing to stop the internal divisions, with the Liberals now being consumed by recriminations about bullying and sexism during the spill.

Supporters of both Turnbull and failed challenger Peter Dutton are seeking revenge by leaking against each other.

Dutton has suffered the most damage. The au pair scandal has exposed him as willing to do favours for those with the right connections.

The hypocrisy is appalling. The Minister who declared there couldn’t be one single act of compassion towards refugees has been caught out bending the rules for his mates.

He personally intervened to grant a visa within hours to an au pair for police officer Russell Keag, who worked with Dutton in the Queensland cops. And it took him just 24 hours to overturn a visa cancellation for another au pair, after a call on behalf of AFL CEO Gillon McLachlan. The young woman involved worked for McLachlan’s cousin, a grazier whose father has donated $150,000 to the Liberals since 1999.

Then former Border Force chief Roman Quaedvlieg came forward to say he’d received a call from Dutton’s chief of staff asking him to help “the boss’s mate in Brisbane” over a visa cancellation. Fairfax has revealed that Dutton also asked him to meet two Queensland policemen, one a good friend of the Minister, to help them get jobs in his department.

Dutton, the candidate of the right of the Liberals, lost the leadership ballot by just five votes. But Scott Morrison is no better. He has already made concessions to the right by dumping the National Energy Guarantee and any effort to meet Australia’s Paris climate targets.

Within his first weeks he has promised new “religious freedom” laws to allow further discrimination against LGBTI people, attacked “gender whisperers” in schools and blustered about deregistering the construction union.

And we shouldn’t forget Morrison’s time as Immigration Minister, spreading xenophobia by labelling asylum seekers “illegals”, masterminding the military operation to turn back boats and presiding over two deaths on Manus Island.

We need to step up the demonstrations and campaigning to drive the Coalition out.

In Sydney thousands of construction workers, port workers and other unionists took stopwork action to rally against the ABCC and the Coalition’s attacks on workers on 6 September.

This was a great start. But most unions are simply focused on electoral campaigning in marginal seats, with only a handful of unions bringing members to the Sydney protest.

We need mobilisations from across the union movement, like the Your Rights at Work rallies that helped drive John Howard from power.

Unions in Melbourne have called a mass delegates meeting on 24 September and a stopwork protest for 23 October, one month before the Victorian state election. They are set to be joined by another construction union rally in Sydney on the same day.

Every union should mobilise for these protests. Rank-and-file unionists need to push for their union to have members attend.

A Labor government after the next election seems almost inevitable. But we can’t rely on Bill Shorten to really Change the Rules at work.

Labor has committed to changes on industrial relations including scrapping the ABCC, stopping employers from terminating expired enterprise bargaining agreements and reversing the cuts to penalty rates. But they have so far promised nothing in terms of the right to strike.

Labor Deputy Leader Tanya Plibersek even told the ABC that the CFMEU, “should face the full force of the law”—that is the anti-union laws that make strikes illegal in most circumstances and impose huge fines on the unions. She added, “I’m sure those fines are very effective in making people think twice”.

Union leaders should demand that Labor scraps all the anti-union laws. Stepping up the stopwork rallies can build that demand, and build the unions’ strength to fight a Labor government if it fails to deliver after the election.

Labor also opposes the only solution that can get the refugees and asylum seekers off Manus and Nauru—to bring them to Australia. Meanwhile Nauru is in meltdown, with dozens of children coming off the island for mental health treatment and medical care.

The Liberals are on their way out. We need to step up the level of struggle to make sure we get real change.