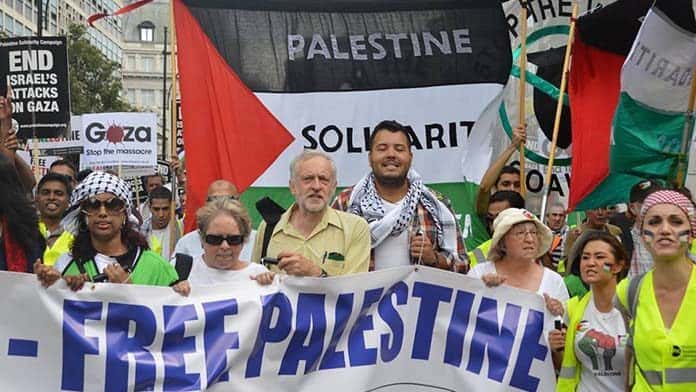 Opponents of Britain’s left-wing Labour Party leader Jeremy Corbyn have mounted a major campaign accusing supporters of the Palestinians, and Corbyn himself, of anti-semitism.

Corbyn has spent his life campaigning against racism in all its forms. But his anti-imperialism and left-wing principles mean he is hated by the right wing of his own party, as well as the conservatives and the mainstream media.

The British Labour Party has now succumbed to right-wing pressure and adopted the full International Holocaust Remembrance Alliance (IHRA) definition of anti-semitism, which lists describing the state of Israel as a “racist endeavour” as anti-semitic. Labour Party members may now face disciplinary action for calling Israel racist, supporting the Boycott, Divestment and Sanctions movement or for talking about the plight of the Palestinian people. This is a serious setback for anti-racists and supporters of Palestinian rights.

Accusations of anti-Semitism are a common tool used to silence criticism of Israel.

Defenders of Israel sometimes try to conflate support for the Israeli state with Jewish identity. Yet there are many prominent Jewish opponents of Israel. In July, 36 Jewish organisations from around the world released a statement opposing the IHRA definition and its equation of anti-semitism with criticisms of Israel. Opposition to the Israeli state is not the same thing as opposition to the Jewish people.

Corbyn’s critics have attacked anti-Zionism in particular—that is opposition to the formation of the state of Israel and the view that it is a racist and pro-imperialist project. But there is considerable evidence for this.

The modern Zionist movement was established at the beginning of the 20th century. Jews in both Europe and Russia faced growing anti-semitism as local rulers used them as scapegoats for poverty and economic crisis.

Anti-Semitism was seen by the architect of Zionism, Theodor Herzl, as an inevitable experience for modern day Jews in Europe. While Herzl wasn’t particularly religious, he recognised the power of biblical myths in creating a nationalistic Jewish identity to form the foundation for a Jewish state in Palestine.

From early on, Zionism looked to the imperialist powers for sponsorship. Following the First World War Britain took control of Palestine and in 1917 announced in the Balfour Declaration its support for Zionist settlement by promising a “national home for Jewish people”.

It was in Britain’s interest to support European Jewish settlement as a defence against local Arab uprisings, to ensure access to India and other colonies via the Suez Canal and to maintain their interests in the Middle Eastern oil reserves.

In 1917 there were only 56,000 Jews in Palestine. But with the backing of the imperialist powers, Jewish immigration rapidly increased. In a 1919 confidential memorandum, Lord Balfour stated: “In Palestine, we do not propose to even go through the form of consulting the wishes of the present inhabitants… the Four Powers are committed to Zionism”.

But the area the Zionists chose to colonise was already inhabited by hundreds of thousands of Palestinians. In order to establish the state of Israel in 1948, at least 700,000 Palestinians were ethnically cleansed in order to seize the land for Jewish settlement.

Israel was designed as a Jewish state, where the remaining Palestinian minority faces discrimination.

Israeli law denies Palestinians any right of return to the lands they were driven from in 1948, while Jews born anywhere around the world can receive automatic Israeli citizenship.

Israel has consistently defied international law by expanding its settlements in the West Bank, stealing water reserves and occupying Palestinian land. Since 2000, at least 9733 Palestinians have been killed by Israeli defence personnel, including at least 2197 children.

Today Israel acts as the US’s “watchdog”, and continues to receive the backing of US imperialism through massive economic and military assistance, having received more US aid than any other country in the period since 1945.

Smearing opponents of Israel as anti-semitic also obscures the real threat of anti-semitism today—the rise of fascism and the far right.

Across Europe far right parties are winning sizeable votes in elections and in the US Donald Trump, a strong supporter of Israel’s government, is encouraging the growth of white supremacist groups who are virulently anti-semitic.

Support for Palestinian freedom is not anti-semitic—it is the responsibility of every genuine anti-racist and opponent of imperialism.