Sudanese youth step up the fight against racist media and politicians 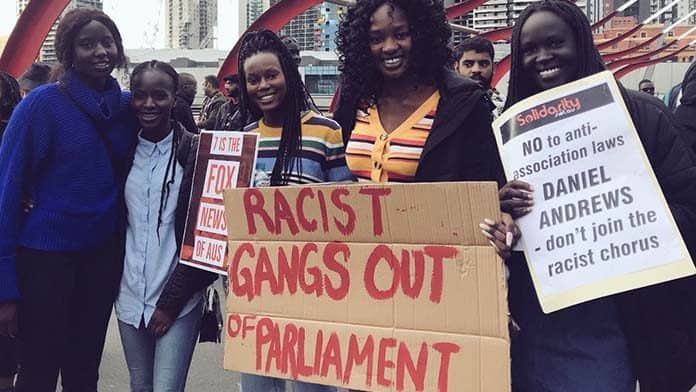 A defiant 500-strong protest led by South Sudanese youth and students stood up to the barrage of government and media racism, rallying on Saturday 28 July, against Channel 7’s airing of the racist “African Gangs” segment on Sunday Night in early July.

Channel 7’s segment is a shameless continuation of a relentless racist campaign since late 2017, when Federal Immigration Minister Peter Dutton and Victorian Liberal opposition leader, Matthew Guy, began to push the idea that Victoria was “over-run” by “African gangs”.

Although Victoria’s Chief Police Commissioner rejected the suggestion at the time, the media continues to demonise and racially vilify Sudanese youth.

Rally organiser, Sebit Gurech, countered media misrepresentation, saying, “I have been in situations where I am hanging with my friends and something happens between them—two people—and later, I go home to see that 250 Sudanese youth were involved in an altercation. But that is not the truth.”

Rally organisers also pointed to the hypocrisy of Liberal politicians’ claims about the over-representation of Sudanese people in the crime statistics. Krown told the rally, “If you are talking about crime… you can go to any station in Melbourne and see any nationality is able to commit crime, so why are you pointing fingers at us?”

Wiradjuri woman and Victorian Trades Hall ATSI officer Edi Shepperd also challenged the government’s demonisation of Sudanese people, “In the union movement we have a saying, touch one, touch all, your struggle, is my struggle… we are with you all the way because our liberations are bound together… we stand against Turnbull, Dutton, Channel 7, and all of their conservative mates with a clear message, your time is up.”

Flora Chol drew links with Aboriginal struggles, “My solidarity will always be with the traditional custodians of this land, because as black people we know all too well, what it’s like to be discriminated just for your skin colour… If we stand together, no one can work against us.”

The Liberals’ campaign against Sudanese and African communities has a longer history. In 2007, Liep Gony was the victim of a brutal racist murder.

Yet just three days after Liep’s murder, then Liberal Immigration Minister Kevin Andrews implemented an immediate freeze on accepting African refugees. At the time, Andrews claimed that Sudanese migrants were responsible for violence and instilled the idea of “violent Sudanese gangs”.

But it was Sudanese people themselves who faced brutal racist violence, as Liep’s murder showed. Liep’s cousin, Nyawech Fouch, spoke publicly for the first time, explaining, “My whole family is traumatised by what the media has done to our family, to our family and friends and the people around us… they criminalised my cousin when he was dead.”

In a replay of events surrounding Liep’s murder, the media has shamefully tried to portray the recent death of young Sudanese woman, La Chol as evidence of “African gangs”. But La Chol’s family told SBS, “It is with sadness that we have watched the tragic death of our precious daughter be used for political agendas and media commercial interests.”

Victorian opposition leader Matthew Guy has distributed a shockingly racist election leaflet. The leaflet, with an image of black men in hoodies in a park was titled, “Stop Gangs hunting in packs”, likening black men to animals.

It was later revealed that the images were taken directly from a 2012 London Evening Standard newspaper article. Malcolm Turnbull’s comments about the existence of “African gangs” has similarly boosted racism.

Responding to these events Krown said, “if it comes to a monopoly game where you need votes, don’t do us like that.”

But while the Liberals ramp up their racist offensive, the current State Labor government’s proposal to introduce the new “Unlawful Association” laws is aiding the Liberals’ racism and hysteria.

The new legislation will give police expanded powers to prevent people as young as 14 from associating with other young people. The Flemington Kensington Legal Centre has condemned the bill saying it will escalate police racial profiling of indigenous people and communities of colour.