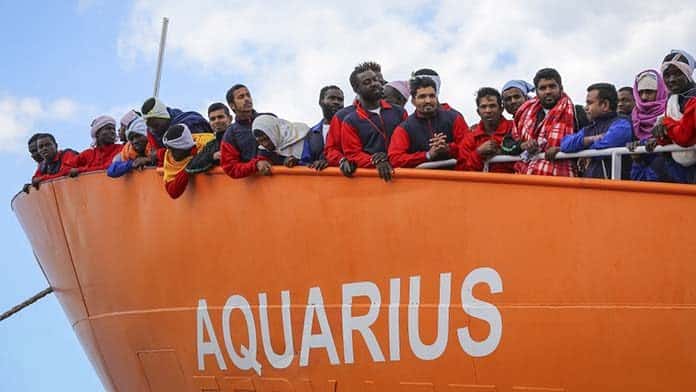 “The good times for illegals are over. Get ready to pack your bags”, said Italy’s new Interior Minister Matteo Salvini, head of the far right League.

Salvini has clear ties to Italy’s fascist movement, and ran on the slogan “Italians First”. The new government—an alliance between the League and populist Five Star Movement—is promising to deport 500,000 migrants from Italy. One of Salvini’s first moves was to refuse to allow a rescue boat carrying 600 asylum seekers from Africa to land in Italy. After a stand-off, the Spanish government eventually agreed to accept them.

Five Star won the largest vote in the March elections—around a third—but not enough to form government on its own. Since then it is the more right-wing League (formerly Northern League) that has seen its popularity surge—from 18 per cent to 26 per cent.

Austerity policies in response to Europe’s Sovereign Debt crisis, the result of the 2008 Global Financial Crisis, have bitten hard in Italy. As in Greece, the “institutions” that run the Eurozone—the European Central Bank, the International Monetary Fund and the European Commission—have driven through cuts. Europe’s neo-liberal fiscal rules dictate a debt to GDP ratio of 60 per cent. Italy’s $3.6 trillion in public debt  is more than double this, at 132 per cent of Italy’s GDP.

Pensions have been slashed and consumption taxes increased in an effort to reduce Italy’s $3.6 trillion public debt. Since 2010 household consumption has fallen by 4.3 per cent. Low wages are widespread and youth unemployment is around 30 per cent. Two-thirds of young Italians believe their lives will be worse than their parents’.

Italy is the fourth biggest EU economy, ten times the size of Greece. Cutting its debt is seen as central to the stability of the European Monetary Union. Italy is both “too big to fail and too big to bail”.

Across Europe, mainstream political parties have implemented austerity rather than fight the dictates of the Eurozone. As a result voters have abandoned the political centre. Radical left parties such as Syriza in Greece, Podemos in the Spanish State, Melenchon’s party in France and Jeremy Corbyn’s Labour Party in the UK have all won big votes.

But in the last year the gains have been mainly for the hard right—in Germany, Austria, the Netherlands, and France. The ability of two right populist forces to actually form government in Italy takes this dangerous trend even further.

There are inherent tensions in Italy’s new governing coalition. While consistently anti-migrant, Five Star’s populism harnesses anti-establishment messages that play to left and right voters, such as its pledge to introduce a Universal Basic Income.

The Northern League grew out of a reactionary movement calling for the autonomy of the wealthy North from the “free-loading” South. But its main focus is vicious anti-migrant racism. In February a League candidate from the 2017 election shot six Africans in a Nazi-inspired rampage. No condemnation came from Salvini who last year had said Italy, “needs a mass cleansing, street by street, neighborhood by neighborhood, doing this the hard way if needed.”

The Five Star Movement and League government promise spending on a Universal Basic Income and tax cuts that will drastically increase Italy’s deficit. The new coalition is neither a consistent opponent of austerity, nor of the EU’s neo-liberal rules that enforce it. Neither wants Italy to leave the EU.

But Europe’s ruling classes still view its attitude to the EU as unreliable. Italy’s president dramatically blocked the coalition’s initial proposal for finance minister as too Eurosceptic. The president argued his duty to investors compelled him to veto the appointment!

He went further, proposing a technocratic neo-liberal as interim prime minister. His pick was Carlo Cottarelli, a former International Monetary Fund bureaucrat named “Mr Scissors” after his attempts to cut $60 billion out of the Italian budget in 2013. Anti-democratic measures like this expose how the Eurozone is run by the financial markets, not the people of Europe.

This manoeuvre sparked a freefall in Italian stocks, leading to fears of another European financial crisis. Many rightly saw that the imposition of an unelected technocrat would only lead to a stronger showing for the populist parties in the following election.

In the end the League and Five Star conceded, moving their proposed finance minister to the post of European Affairs and re-affirming their support for Italy remaining in the EU. The new government was then sworn in.

In May 20,000 Italians marched against the far right, and in protest against the alarming rise of violent attacks on migrants. This movement needs to rapidly grow to meet the current challenge.

The Italian election is a warning for the left everywhere. Without a strong left-wing party that both opposes racism and fights austerity, and in Europe this means taking on the EU, the anger and bitterness at the political elite can be channelled by the racist right.