Fighting Casualisation—union power and the right to strike 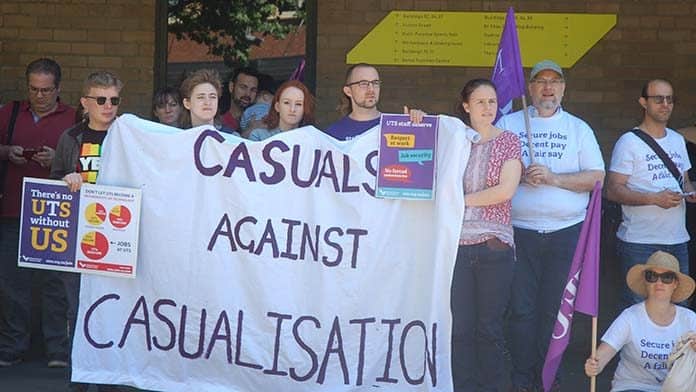 Casualisation and insecure work is a growing problem. Union organising and industrial action have defeated it before, and can do so again.

“One of the key things we want to change for working people is turning around or reversing the casualisation of jobs”—so said Sally McManus, leader of peak trade union body the Australian Council of Trade Unions (ACTU), in December last year.

The decision to make casualisation a touchstone issue in the union campaign to Change the Rules is a welcome one. Along with proposals to reform the Fair Work Act, the ACTU is also campaigning for legislation giving casual workers the ability to convert to permanent roles after six months in the job.

Yet the campaign will need to extend beyond its current focus on electing a Shorten Labor government. Brendan O’Connor, the Shadow Workplace and Deregulation Minister, has promised in response to the ACTU is that “Labor is committed to examining” the issue of casualisation, and developing a “test” to work out if workers are really casual or not. While this would be welcome, it won’t be enough.

The shift towards insecure work in Australia is connected to the decline of union power since the 1980s—and reversing the trend goes hand in hand with rebuilding fighting unions that are prepared to take industrial action.

The roots of casualisation

Just how much of a serious problem is casualisation? In 2015, 2.5 million workers, or 23.9 per cent of the workforce, were working casually, according to the Australian Bureau of Statistics.

Recent ACTU claims that the problem of casualisation is getting worse were met with smug denial by business groups and Workplace and Deregulation Minister Craig Laundy. They pointed out—not incorrectly—that the number of casual workers has remained relatively stable over the last 25 years.

That convenient statistic, however, misses out the fact that real growth in casual employment came in the 1980s. According to analysis by the Parliamentary Library, 13 per cent of workers were casual in 1982. By 1992, that number had increased to 22 per cent—similar to current figures.

As Professor John Quiggin explained, “In general, the period from the 1980s to the mid-1990s was one in which workers lost ground over working conditions. The prevalence of long working hours, unpaid overtime and casualisation all increased.

“This reflected the combined effects of two major recessions and the weakening of unions, both of which weakened workers’ bargaining power. The gradual improvement in the labour market since the mid-1990s has led to a stabilisation, but no improvement.”

The rise in casualisation also coincides with the signing of the Accord between unions and the Labor government in 1983, which saw unions agree not to take industrial action in pursuit of workers’ claims in exchange for a promised social safety net.

Unsurprisingly, bosses took the advantage this gave them. Some employers prefer casualisation because it means they do not need to pay workers’ entitlements, including those unions have won for permanent workers through their agreements, and they can easily sack workers simply by refusing to give them more hours.

But while casualisation has been a serious issue for a long time, there are two new trends that are particularly concerning.

The first is the number of casuals who are working full time hours. The figures are rising rapidly—since 1992, the figure has increased from 7 per cent of workers to 12.1 per cent.

The second trend is that the percentage of young casual workers is growing. So, while 24 per cent workers aged 20-24 were casual in 1992, now 41.3 per cent of workers in this age group are casual. That means for young workers, some jobs that used to be permanent are no longer so. If that continues as these workers age, the figures will rise.

In some industries, like education, the crisis is particularly acute—new research from Kinetic Super estimates 46 per cent of workers in the industry are temporary, casual, or contract workers.

The already disadvantaged pay a higher price for casualisation. Casuals are more likely to be women (27 per cent of women workers are casual, compared to 23 per cent of men), and women casuals make an average of $430 a week before tax compared with an average of $688 a week for men.

The ACTU’s campaign is focused not just on casual workers but all forms of “insecure work”—part time workers, those on temporary contracts, and self-employed workers. Using this definition, the ACTU estimates that around 40 per cent of employees are now in insecure work. While some self-employed workers are genuine small business owners, there are a growing number of workers in the “gig economy” employed on sham contracts with major companies like Uber and Deliveroo, making below the minimum wage and earning no superannuation.

This general picture of insecurity, along with the enormous growth in the cost of housing and low wage growth, is fostering a growing sense of anger and injustice amongst younger workers in particular. The question is how to nurture that anger and start to turn the trends around.

There has been growing discussion of casualisation and precarious work in recent years. Some theorists, such as Guy Standing, claim that casuals and other precarious workers constitute a new class, the “precariat”, and that union organisation is not the solution. This is often tied up with other arguments about how globalisation has changed the economy.

But while casualisation is a feature of our current historical period, it is not a new feature of capitalism. Insecure work was the norm for workers in the nineteenth century. Workers’ activity transformed employment conditions, however.

The fight to achieve the eight-hour day in Victoria is emblematic. In the 1800s, Victorian workers regularly worked 14-hour days with no sick leave, annual leave or other rights. The Stonemasons Society issued an ultimatum to employers in August 1855—in six months, they were going to start working eight hours a day. But Melbourne city construction workers weren’t keen on waiting that long, and decided to go out on strike right away. They won the 8-hour day within six weeks, and set the tone for the ongoing struggle for the 40-hour, five-day working week across the country.

Strike activity like this—along with the expansion of spread of larger businesses—created the conditions for the kind of permanent employment with restrictions on working hours, rights to leave, and so on, that became the most common form of employment in Australia.

There’s no objective reason why workers today cannot do the same as those Melbourne construction workers. The Maritime Union of Australia (MUA) has managed to hold off casualisation on the wharves by insisting on it in union agreements, and being prepared to take strike action. Some construction union agreements contain clauses that a casual employee must be converted to permanent after a certain amount of time.

Many union organisers imagine the casualised workforce to be timid in asserting their rights, and difficult to organise. But sometimes this ends up being an excuse for their inertia.

Even in workplaces where casualisation is rife, workers have fought back successfully. After striking for 13 days in 2011, workers at the Baiada chicken factory—presided over by a notoriously divisive management—won equal pay for casuals and contract workers who had previously been paid cash-in-hand.

Similarly, workers at Polar Fresh, a Coles warehouse in Melbourne, won 50 full time jobs and conversion for labour hire casuals when they went on a three day strike in 2016.

During the most recent enterprise bargaining rounds at universities, casual activists have been a regular fixture on pickets and have worked to push more consideration of casual conditions.

The common thread of this—from the construction workers in 1850 to the Polar Fresh strike—is industrial action. As construction union’s NSW President, Rita Mallia, told a right to strike meeting in Sydney in April, “workers have won everything that’s worth anything by taking industrial action”.

It is here where the problem becomes subjective, not objective: while we have the power to organise against casualisation, and to take strike action, we must contend with anti-union laws that hamper the right to strike, and with a union leadership unwilling to break them.

The growth of casualisation corresponds with a period of unwillingness amongst unions to exercise their industrial power—so the battle against casualisation is also a battle for rebuild fighting unions.

Socialists are organising within the Change the Rules campaign with two key goals in mind—firstly, to make “the right to strike” a central demand of the union campaign. Current restrictions only allow striking within an enterprise bargaining period, and as the train drivers’ dispute showed, even during that period, unions face the weight of numerous anti-union laws that can prevent even this “protected” strike action. Unions are sometimes fined millions of dollars for taking “unprotected” action. The law is also stacked against casuals, who have few rights to permanency and nearly no legal recourse when sacked.

Changing the law, however, also means breaking it. By strategically exercising our right to strike, we can build up union power and make the law harder to enforce—and pressure bosses to agree to demands for casual rights. When unions take action to defend jobs and wages, they grow and build their relevance amongst workers.

This means we need strategies both to campaign to change the law at a national level, and to build power to change the situation in our workplaces.

When the Fairfax workers took unprotected strike action to save their jobs in 2017, they received widespread sympathy and solidarity—and raised the question of the right to strike in a very tangible way.

Pressure from below inside the unions is essential for pushing strike action when union leaders will not. It is also essential to make sure that demands to turn casuals into permanents and improve conditions are not relegated to the too hard basket.

The ACTU’s campaign on insecure work is resonating with many, and it has opened up the space to campaign around casualisation. Union activists can wedge the space open a lot further.