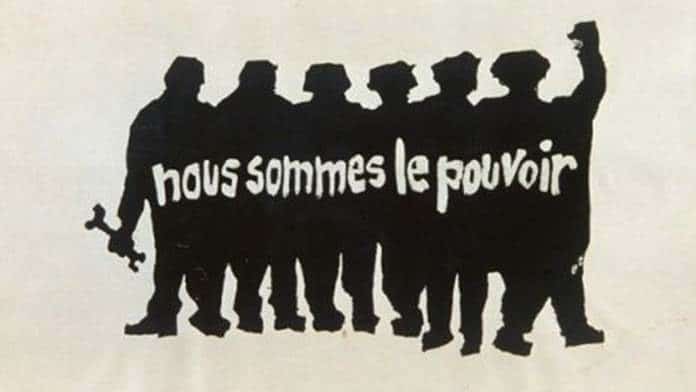 The factory occupations began at Sud-Aviation, an aircraft factory in Nantes in western France.

A revolutionary socialist militant, Yvon Rocton, had been arguing for a strike and occupation, but he got little support.

News of the Paris demonstration changed everything, as another worker in the factory described: “A whole unknown world was revealed to the startled eyes of the majority of workers: a world of struggling students which had been forgotten… Sud Aviation suddenly felt less alone.”

The next day the workers voted for indefinite strike and occupation.

A couple of days later a march of a thousand students came to the factory, and hundreds spent the night inside the plant.

This picture was repeated across France. Britain’s Socialist Worker at the time described the scene outside a Paris factory:

“When a student spoke to a factory gate meeting at the Renault car factory… a union official suggested that the paramilitary police were waiting nearby, and that the student had called them there.

“Little attention was paid to the officials, and the young workers suggested factory occupation and machine-breaking.

“They were talked out of the latter, but the massive Renault plant was immediately taken over.”

Another Renault worker recounted, “Every evening I took five or six workers in my car to the Sorbonne.

“In Renault their freedom was alienated. In the Sorbonne they felt free.

“Within Renault he was only a thing. In the university he became a human being.

“This atmosphere of freedom in the sense of being considered human gave great combativity to the young workers.”

“On 17 May, when we came in to work on the night shift at 6.30pm, we heard that the Montparnasse railway workers were on strike. We did not need a vote to decide and do the same, enthusiastically. It is true that the night shift is composed of a majority of young people. The first evening, we did not even think of occupying the office for lack of experience.

The next morning, some of the day shift workers wanted to come in. We had to convince them. We then understood that we had to occupy the place and protect it with a strike picket.”

Account by a young worker at a Paris railway station

By occupying the factories, by turning out into the streets in their tens and sometimes hundreds of thousands, by hoisting the red flag over their workplaces, by spreading everywhere such slogans as: “Ten Years is Enough”; “The Factories to the Workers”; “Workers’ Power”; “Power to the Working Class”, the mass of strikers expressed aspirations which went far beyond purely economic demands.

But there is a far more convincing proof still of the fact that the workers too wanted to go beyond a simple routine campaign “for wages and good elections”… wherever they had the opportunity of expressing themselves freely, wherever the bureaucratic screen had been shaken or had given way… Nothing like a complete inventory of such experiences as yet exists; but the list is already an impressive one:

Michael Hyde on 1968: ‘It felt like everything was up for grabs’