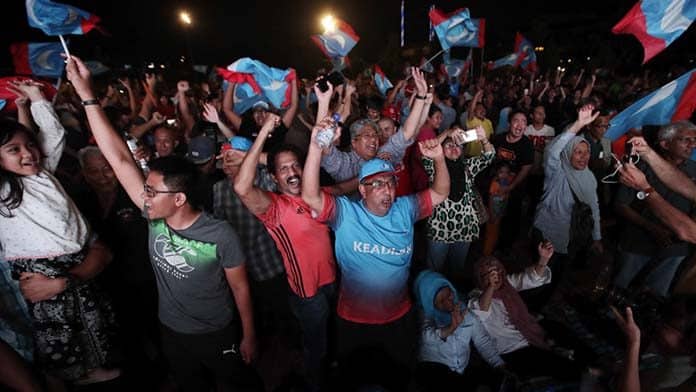 Against all odds and despite blatant vote-rigging, the Barisan Nasional coalition (BN) which has ruled Malaysia since independence in 1957 was thrashed in the election on 9 May.

Defeated Prime Minister Najib Razak’s introduction of a GST was deeply unpopular, and he has been embroiled in an embarrassing years-long scandal around his embezzlement of billions from the 1MDB development fund. He has continued racist policies benefiting the Malay business class and a crackdown on free speech.

By contrast, PH vowed to abolish the GST, bring corrupt politicians to justice, reduce the cost of living and champion minority groups.

For many, this regime change has been 20 years in the making. In 1998, Mahathir sacked his deputy Anwar Ibrahim and had him imprisoned on false charges of sodomy. In response Anwar’s wife formed the PKR party, the core of the opposition coalition.

Many are hailing the 92-year-old Mahathir as a hero, a former dictator who tore his old party in half and joined forces with his enemy to right past wrongs.

But Mahathir is no saint. He blamed the bloody 13 May race riots of 1969 on non-Malays, producing The Malay Dilemma, a racist treatise that espouses economic apartheid and the creation of a new Malay bourgeoisie to prevent “Chinese takeover”. This strongly influenced the ideology of UMNO, the ruling Malay party, and was used to justify race-based welfare, biased university quotas and purging of non-Malays from the civil service.

Mahathir became PM for the first time in 1981, and over the course of his 22-year rule oversaw a crackdown on political opponents, introduction of military service and mass privatisations. His cronies grew fat off government contracts while attacks continued on the few remaining independent unions.

Opposition coalitions in Malaysia have always been based on marriages of convenience, and PH is no exception. It contains the centrist PKR, the centre-left DAP, the progressive Islamist Amanah, and Mahathir’s party Bersatu, which is politically identical to UMNO.

Bersatu was formed in late 2016, when Mahathir engineered a split in UMNO that caused the defection of thousands of loyalists and several prominent leaders. Bersatu is an openly race-based party where only Malay members have voting rights. Its support is based on rural patronage networks. Bersatu joined an electoral pact with the opposition in December 2016. Mahathir was named Chairperson of the alliance in mid-2017 and its PM candidate in January this year.

The PH Manifesto made good promises about civil liberties and inequality. Its leaders declared that the end of race-based politics was at hand. But the impact of allying with Mahathir is clear. The coalition appealed to Malay voters by talking up Mahathir’s past record in power and promised them similar handouts to those BN habitually offers during elections. Proposals for eliminating race-based welfare were gradually replaced by platitudes about unity.

When the Socialist Party of Malaysia (PSM) opposed an electoral pact with Mahathir involved, it was sidelined. Standing separately from the opposition coalition, PSM lost its only parliamentary seat.

On a knife edge

Malaysians are already celebrating the possibilities of the new regime. There is open talk of exacting revenge against Najib and his cronies in the courts and the Election Commission. Rumours that Najib was attempting to flee to Indonesia prompted hundreds to descend on the airport. Najib has resigned as UMNO leader.

Anwar has now been released from prison and Mahathir has promised to hand power to him after two years.

But the fate of PH’s promises stands on a knife edge. The government is already hinting that it may cancel the TV license of a pro-BN station. Mahathir himself is having second thoughts about repealing some censorship laws that ban political activity on campuses and “fake news”.

There is a dangerous complacency that change is now inevitable.

Even parts of Bersih, the movement for clean elections, have been sucked in. Its leader Maria Chin Abdullah is now an MP, and a previous chair has warned against criticising Mahathir’s cabinet picks for the sake of “stability”. But without continued mobilisation to demand promised reforms, it is more likely Mahathir will water them down to reinforce his rural Malay base.

Most of PH’s leaders are neo-liberals. As pressure mounts on them to stabilise the economy, deal with the massive debt accrued under Najib, and renegotiate an infrastructure-bailout deal with China, their promises to support union rights and increase the minimum wage may fall by the wayside.

Bersatu’s entry into PH snuffed out its commitments to dismantling Malay supremacist ideology. An unsuccessful term in government could pave the way for a disastrous BN return in five years’ time. Activists and socialists will have to make good use of the temporary opening provided by BN’s defeat, and mobilise workers and the poor to defend the reforms they voted for.

Bersih: Malaysia’s Tahrir in the making?