This is not about a few bad apples in the finance industry. As the Royal Commission is showing, the whole barrel is rotten.

From AMP to ANZ to the Commonwealth Bank to Westpac, one thing stands out. They are all ripping us off. They lie, they cheat, they collude, all to make big profits.

Fees for services that are not provided; fees levied on dead clients; hoodwinking people into products that benefit the adviser or the bank; money laundering… the list of crimes and shonky dealings goes on and on.

The profits they make from their crimes against customers are huge. For a number of years Australian banks have been the most profitable or second most profitable in the world, as this graph from The Conversation shows. 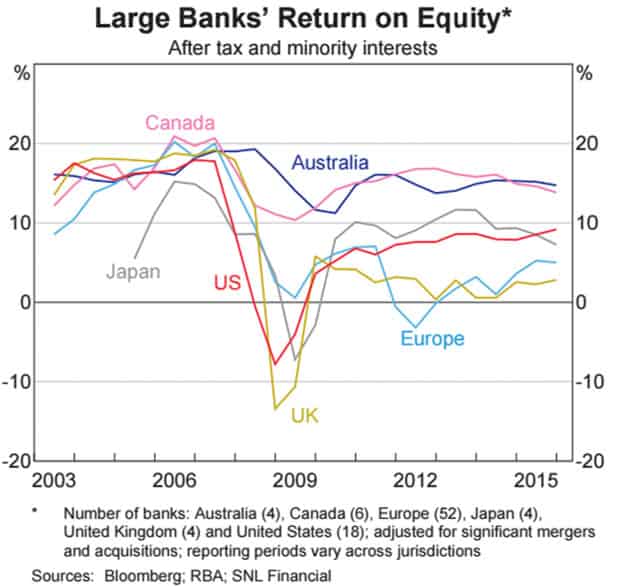 The super profits, or economic rents, Australia’s big banks earn come in part from screwing their staff, their working class account holders and from capturing the profits of other sectors of society.

That is why an economic rent tax applying to all sectors of society that make them would be rational even from the point of view of capitalist politicians and economists.

On top of all that the government’s explicit bank guarantee—a bailout at the time of the GFC—is worth about $5 billion a year to the big four banks, according to the Reserve Bank.

The finance and Insurance sector accounts for 9.4 per cent of gross value added to the economy each year. The banks are a key part of the structures of capitalist exploitation and power.

The Turnbull government used this to support their disingenuous argument that a royal commission could trigger a banking system collapse.

The real reason the Liberals voted 25 times against a banking royal commission was because they knew it would reveal the reality.

Despite Turnbull saying he was shocked by the revelations, he was a merchant banker himself and knows full well that the quest for profit means screwing workers, customers and competitors.

“What we seem to be seeing is that a conscious decision is made to protect the profitability of AMP at the expense of complying with AMP’s licence, do you agree?”

“Yes, I believe that’s what that shows, yes.”

The problem goes beyond lack of regulation. After all ASIC, the regulator, has proven itself to be (deliberately) weak.

Capture of the regulator by the regulated, helped along by the fact that key ASIC staff are drawn from the banking sector, is only part of the problem. In the Budget the Turnbull government cut $28 million from funding for ASIC over the next three years.

Clearly the government does not want even a soft cop on the banking beat.

It is too worried about protecting the profits and reputation of this key sector of Australian capitalism.

The real problem the Royal Commission is exposing is capitalism and the quest for profit that drives all businesses.

This has caused banks—and other companies far removed from the spotlight of a Royal Commission—to cheat their small customers, lie to ASIC, and sack staff.

Imagine what a Royal Commission into wage theft would yield. Or deaths on building sites. Or precarious employment. Or aged care.

What then can be done? Given that the banks exist to make profit more regulation is akin to King Canute trying to hold back the waves.

Ben Chifley had the right idea—we need to nationalise the entire banking system. But don’t expect the Labor Party of today to embrace that.

The bosses’ one-sided class war against workers has been going on since the unions tied their hands behind their backs in 1983 when a Labor government brought us the Accord. It was then that the transfer of wealth from labour to capital accelerated.

In Melbourne this month 120,000 workers marched demanding the industrial relations rules be changed. The message from that huge rally should not just be to vote Labor.

In the face of stagnant wages, cuts to basic services and growing inequality the working class that has the potential to challenge not just the cheating banks and their CEOs but to challenge the whole rotten system.

Strike action, especially by those who work inside the banks, is the key to challenging the system that feeds all these parasites living off our labour.

Why capitalism fails and the alternative

Adam Adelpour explains how tackling the rise of racism and the far right, the threat of climate change and growing inequality requires a fight...

The end of Apartheid has not delivered change for South Africa’s black working class. Marikana showed the new divide in the country, writes Lucy Honan

The New Guard: When Australia’s rulers flirted with fascism

As Australia suffered a major economic crisis in the 1930s, sections of business and the ruling class began to encourage a growing fascist movement,...