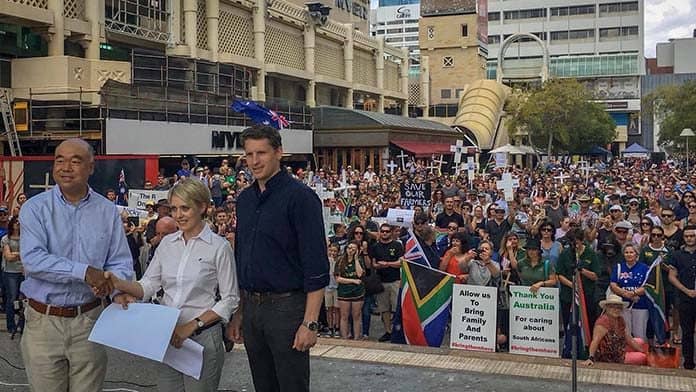 If you want an example of how the respectable racism at the top of society shapes racism more broadly and encourages the far right, look no further than the campaign for white South African farmers being waged by the likes of Peter Dutton, Alan Tudge and WA Liberal MP Andrew Hastie.

Peter Dutton’s declaration that white South African farmers should get “special attention” and be fast tracked for refugee or humanitarian visas sparked right-wing rallies in Brisbane and Perth. The next rally for the white farmers is planned for Adelaide.

Dutton’s comments oozed racism, as he declared support for the white farmers who will “abide by our laws, integrate into our society, work hard,” while ignoring the hundreds of thousands of Rohingya farmers being ethnically cleansed from Myanmar.

Dutton’s comment that white farmers needed help from a “civilised country like ours” was atrocious. There is nothing “civilised” about a country in which the first people are imprisoned at a greater rate than South Africa under apartheid; to say nothing of the government’s treatment of refugees.

The situation of white farmers in South Africa is a legacy of apartheid. The 1913 Natives’ Land Act gave ownership of 87 per cent of land to Europeans, confining the black majority to just 13 per cent of the entire country.

Today, white farmers control 73 per cent of arable land although only 8 per cent of the population is white, and even fewer are farmers.

Dutton’s campaign is out-and-out racism to both pander to specific constituencies in Liberal electorates and to also whip up the general level of racism in the run up to the federal election.

Citizenship Minister Alan Tudge was still telling Sky News that the Coalition “may well be able to take some in.” And despite the facts, Hastie was still doing interviews about “persecuted” white farmers.

Not surprisingly, The Australian, the newspaper that campaigned to drive Aboriginal people from remote communities, is devoting page after page to boosting the white South African farmers—and the right wing of the Liberal Party.

There is another sickeningly hypocritical element to Dutton’s campaign. Under present laws, white South Africans could not be accepted as refugees.

There would have to be special laws for them—an ironic echo of the “Whites Only” signs of apartheid.

Even if there was evidence of persecution on racial grounds, Australian law says that if a white farmer can reasonably relocate to another part of the country, then the case should be refused.

Many Afghan Hazaras are currently being rejected precisely because the immigration department says it is possible for them relocate to other parts of Afghanistan. Even if they are found to be a refugee because of the dangers in one part of Afghanistan, Hazaras are being told they can live in Kabul.

There is a mutual appeal between the white farmers and the racist elite in Australia. The origins of both Australia and South Africa as white colonial settler states embedded a deep racism in the structure of both states.

The furore about the white farmers has lifted the lid on a particularly ugly current of White Australian racism that Dutton hankers for.

It is a stark reminder that there is a system that fuels the racism that the Liberals spew out over Indigenous people, refugees, migrants and Muslims. We need to fight the racism, and their system.