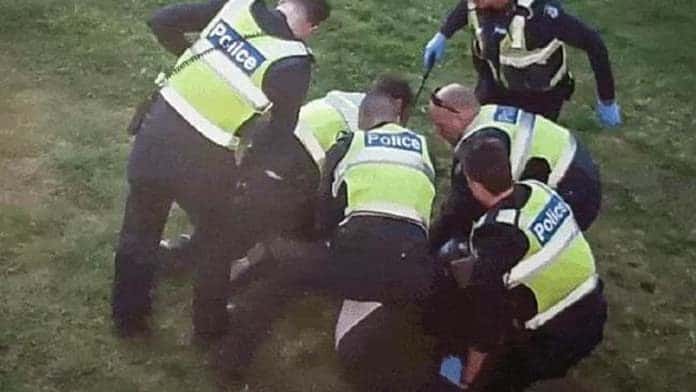 In early April, The Age in Melbourne ran a series of stories, including CCTV footage, exposing graphic, unprovoked violence by police during arrests in 2016 and 2017.

In the first story, police bash a disability pensioner. The man is held on the ground by six officers, struck repeatedly, pepper sprayed and humiliated by officers, who then laugh while they film themselves spraying him in the face with a hose.

The second story shows footage of the aftermath of an arrest of a Sudanese man holding up a chemist. Despite being handcuffed and securely in custody, police continued to bash the man in the head and stomp on his back. The final story featured an Indigenous man in Bendigo being thrown headfirst by police into a cell door. He was knocked out, bleeding profusely from the face.

The Age called for improved mechanisms for holding police to account, a call supported by the Law Institute of Victoria and legal advocates. The paper ran lengthy interviews with victims and lawyers despairing at the ineffective complaint system, which relies on a Police Professional Standards Command run entirely by existing police.

This system is worse than a farce. Assistant Police Commissioner Brett Guerin, the head of the Professional Standards Command, resigned in February after being exposed for making explicitly racist and sexist posts on social media under a pseudonym.

The comments targeted African people in particular, including one which said:

“I’m afraid this is what happens when the lash is abolished. The jigaboo runs riot and out of control. The ‘boo needs the lash… Deep, deep down the ‘boo knows the lash provides the governance and stability.”

Guerin’s position placed him in charge of overseeing—and dismissing—a large volume of complaints against racist policing made by African communities in Victoria.

Chief Commissioner Graham Ashton was quick to argue that Guerin’s behaviour was, “not consistent with our values”.

But there were numerous complaints about Guerin’s racism before he was appointed to the position. His ideas express perfectly the daily practice of racially motivated violence and harassment meted out by the Victorian police.

Violence directed at the poor and oppressed is part of the role of the police. Their central function is to defend a deeply unjust social order, protecting the sanctity of property in a capitalist system with extreme disparities of wealth and power.

Modern policing was born in Britain during the industrial revolution to force compliance amongst the newly formed working class. They attacked workers’ demonstrations and broke up picket lines—and still do so today.

But the police are also the only institution that exists to tackle violent crime, or investigate when children or family members go missing. This explains the mainstream idea that police exist to ensure everyone’s safety.

But police also spend most of their time dealing with the homeless, people suffering mental illness or living with poverty and violence. This explains the brutal police mindset, which refuses to tolerate any challenge to authority and dehumanises people marginalised under capitalism.

In Australia, police forces were created to discipline convicts and other lower classes. They also had a foundational role carrying out massacres of Aboriginal people, driving them off the land to make way for pastoral capitalism. Police have been central to upholding Aboriginal oppression ever since, enforcing racist Protection laws, confining people on reserves and forcibly removing children.

In the NT, police have special powers to enter Aboriginal homes and vehicles without a warrant. And in many areas across Australia, the majority of police time and resources are spent targeting Aboriginal communities. Almost a third of people in prison nationwide are Aboriginal, despite making up only 2.5 per cent of the population. Aboriginal children are the majority in youth detention centres.

Black communities have also been in the forefront of resistance to police brutality. After a death in custody in 2004, protests on Palm Island burnt down the police station and court house. This forced the prosecution of killer cop Chris Hurley. Aboriginal Legal Services established in the early 1970s to deal with police harassment were the forerunner of a broader movement of community legal centres offering free representation.

When confronted with the revelations of brutality in The Age, Victorian Police Minister Lisa Neville defended the police involved, saying, “Policing is confronting… it’s not always pretty when you arrest someone”. The Andrews government is pushing ahead to give police new riot control equipment, semi-automatic weapons and discretionary powers.

This will bolster the confidence of police to mete out even more abuse. These problems won’t be solved by simply identifying so called “bad apples” through better accountability mechanisms. The entire barrel is rotten.

Moral panic over drunken violence covers attack on our rights