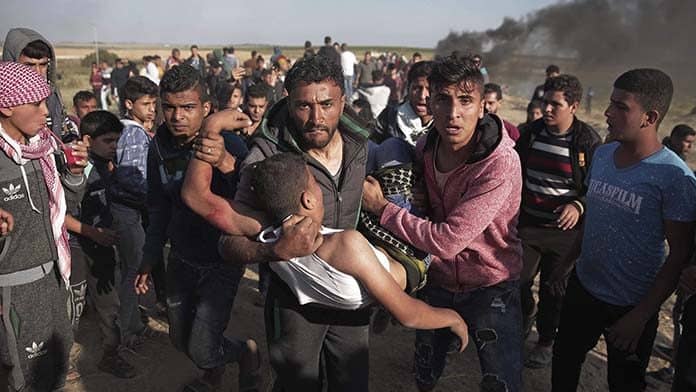 Palestinians in Gaza have defied a murderous Israeli assault as they stage protests marking 70 years of dispossession.

Israeli soldiers have repeatedly opened fire on demonstrations with live ammunition and rubber bullets. At least 33 Palestinians have been killed and almost 3000 injured.

Despite mainstream media claims that the protests led to “clashes” not a single Israeli has been injured during the protests, nor has the border fence Israel claims to be defending been breached during the protests. Palestinian protesters with no more than stones and burning tyres have been shot by Israeli snipers in a calculated assault.

Mohammed Sabbagh said he watched as his younger brother was shot. “He didn’t do anything—he was standing next to me,” he said. “He asked me for a cigarette. I gave him a lit one, he took about two puffs and then a bullet shot him in the head and went out the other side.

“I carried him to the ambulance and he was dead.”

After the UN Human Rights Commissioner condemned its actions as “deplorable killings”, Israeli defence minister Avigdor Liberman dismissed the outcry. Israeli troops “did what had to be done” Lieberman said, adding, “All of our troops deserve a medal.”

Following the initial demonstration the Israeli Defence Force admitted the killings were intentional, tweeting that every shot fired was “accurate and measured, and we know where every bullet landed”. This was later deleted.

The Israeli massacres are the bloodiest since its last war on Gaza in 2014, which killed 2251 Palestinians.

Tens of thousands of Palestinians have joined the six weeks of protest, dubbed the Great March of Return, to demand the right to return to land they were forced from in 1948.

They are also calling for an end to Israel’s crippling blockade of the Gaza Strip. UN Middle East envoy Nickolay Mladenov warned in February that Gaza was on the verge of “total collapse”.

Since 2007 it has suffered shortages of electricity and drinking water, and its economy has been all but destroyed. Around 80 per cent of the population survive on humanitarian aid.

The protests will conclude on the day of the Nakba or “catastrophe”—this year marking 70 years since 750,000 Palestinians were expelled from their homes during the creation of the state of Israel.

Over 60 per cent of Gaza’s two million strong population are refugees or their direct descendants created during 1948 and subsequent expulsions.

The Israeli state was founded on violence and ethnic cleansing against the Arab population of Palestine. Large-scale Zionist settlement began in the early 20th century, as Jewish settlers from Europe arrived with the aim of establishing an exclusively Jewish state.

Zionist settlement was supported by British imperialism, which took control of the region after the First World War.

In November 1947 the UN decided on a partition plan carving the area up between a Jewish state and a Palestinian state. The division was grossly unfair—the Jewish population were given 55 per cent of the area, even though they were only one third of the population and owned 6 per cent of the land.

But the Zionists were determined to seize even more land.

According to Israeli historian Illan Pappe, “Between February 1947 and March 1948, a final plan for ethnic cleansing was prepared.

“The Zionist leadership defined 80 per cent of Palestine (Israel today without the West Bank) as the space for the future state.

“This was an area in which one million Palestinians lived next to 600,000 Jews. The idea was to uproot as many Palestinians as possible.”

This was achieved through a campaign of terror. On 9 April two Jewish militias attacked the village of Deir Yassin. They moved from house to house, throwing grenades into each one before shooting anyone left alive. At least 100 Palestinians were massacred, half of them women and children. This was only one of dozens of massacres at villages such as Saliha, Lydda, Abu Shusha and al-Dawayima.

Israel seized control of the West Bank, East Jerusalem, Gaza and the Golan Heights in another war in 1967.

The process of colonisation remains ongoing. Even since the “peace process” began in 1993, the number of Israeli settlers in the West Bank has grown from 100,000 to 435,000 living in 150 illegal settlements. Most are built on land simply stolen from Palestinian villages.

Donald Trump’s recognition of Jerusalem as Israel’s capital has all but ended the prospect of a two-state solution, since East Jerusalem was meant to be set aside for the Palestinians.

It makes the goal of a single, democratic state, where Jews and Arabs live together with equal rights, the only realistic solution.

Corbyn under attack, but opposing Israel is not anti-semitic