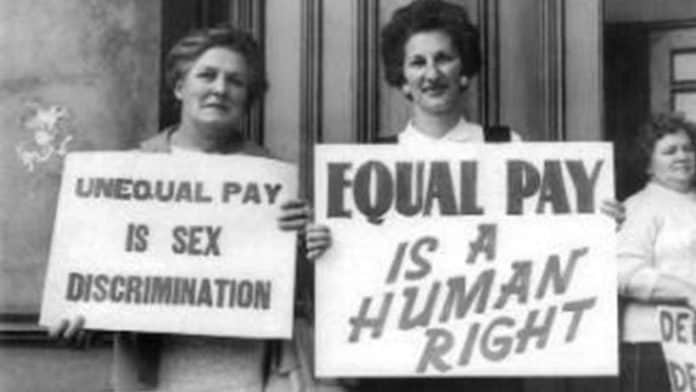 Every great social movement finds individuals who become its symbols—Rosa Parks for the American Civil Rights movement of the 1950s and 1960s; Eddie Mabo for land rights.

Zelda D’Aprano, who died last month at the age of 90, became a symbol of the struggle for Equal Pay in Australia in October 1969 when she chained herself to the doors of the Commonwealth Building in Melbourne. Zelda was protesting against a miserable, limited decision of the Arbitration Commission to only grant equal pay to women who could establish that their work was of equal worth to that of men. Ten days later, she was joined by two teachers who chained themselves to the door of the Arbitration Commission on the day that Victorian teachers went on strike for equal pay.

Zelda was front-page news for the first time in her life, but in reality these imaginative stunts were just two more actions in a life of bitter struggle, against poverty, exploitation, sexism, and the sluggish indifference of too many trade union leaders to the problems faced by women workers.

Her working life in Melbourne started at the age of 13. She moved through a series of dead-end jobs, many in the sweatshops of the clothing industry, before starting work as a dental nurse in a psychiatric hospital.

For 15 years she fought the vicious far-right leadership of the Hospital Employees Federation who did nothing for the wages and conditions of their members because their main concern was the Catholic Church’s campaign to destroy communism.

She campaigned within the union to allow members in her hospital to have their own sub-branch so they could meet and organise for better conditions. She campaigned to get the union to demand higher wages, safer working conditions and was a leader in the union’s first strike action against demoralising rosters. In her autobiography, she recalled that, “For an industry or service where stoppages were almost unheard of, the tension was terrible.”

She argued against those who saw nurses as “professionals” who did not belong in the same union as tradespeople, and stood up against sisters and matrons who routinely humiliated the staff they supervised.

In her personal life, after years living in single bedrooms in other people’s houses, with all the tension and unhappiness that involved, she had threatened to sit in in the Victorian Housing Commission head office unless they stopped delaying and provided a home for her family.

Exhausted by the demands of nursing, in 1969 she started working in the office of the Meatworkers’ Union (AMIEU). The Meatworkers’ were the test case for the 1969 Arbitration Commission decision on equal pay. The decision was a defeat for the union, and for women, giving just 5 per cent of women the opportunity to gain male rates of pay.

It was that decision that led to her chaining herself to the Commission’s doors in October 1969.

Within the union, her militancy and determination to stand up for herself led to her sacking by its communist leadership. Zelda had been a committed party member for over 20 years and worked tirelessly in her suburb and union for the party. When the party was pressured into an investigation, the result was a bureaucratic whitewash which protected the high-profile union secretary.

Zelda shifted her focus. She was instrumental in setting up Women’s Liberation in Melbourne and the Women’s Action Committee. They organised the first public protest for abortion rights, campaigned against the objectification of women in the Miss Teenage Quest, and refused to pay full fare on Melbourne’s trams because they had been denied equal pay.

Zelda’s story is nowhere better told than in her autobiography, Zelda: the becoming of a woman, first published in 1977.

It was written at a time when the voices of working class women were almost never heard; and indeed a period when activist women were routinely ridiculed in the media.

The book’s greatness also lies in the clarity and honesty of her writing, and in the way that she integrates heart-rending accounts of all aspects of the oppression she experience—the fear of pregnancy, the pain of her abortions, rape and sexual assault, including at the hands of party members, the arrogance of doctors—alongside a love of humanity and a fierce determination to stand up for herself and others. The humiliations of class and poverty are interwoven with the humiliations of being a woman, and the child of immigrants.

Over the past fortnight, I’ve been surprised to find IWD activists and young, radical women trade union organisers who had never heard of Zelda.

That’s a pity, because apart from being an inspiration, her work is unfinished.

For all the gains made by women over the past 40 years, we have a government determined to maintain the gender pay gap (by refusing to fund better pay for childcare workers), to do nothing substantial for women facing violence, and to maintain the family stereotypes that Zelda saw as underpinning it.