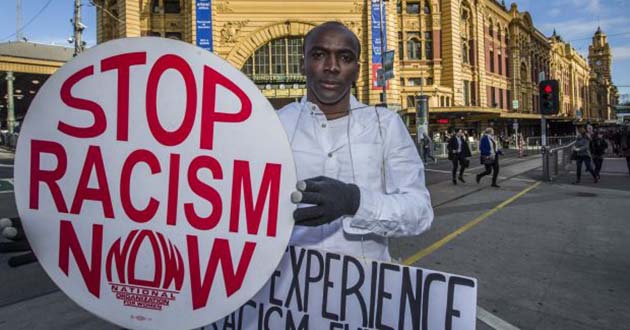 The media panic about “African gangs” went into overdrive in January, as news outlets including Murdoch’s Herald-Sun in Melbourne declared “an explosion of African gang crime”.

Peter Dutton tried to whip up a racist scare campaign, telling a radio shock jock, “people are scared to go out to restaurants of a night time because they are followed home by these gangs”.

Prime Minister Malcolm Turnbull backed him, claiming there was, “growing gang violence and lawlessness” in Victoria. The Liberals will take any opportunity to attack Muslims, migrants and refugees in their shameless efforts to scapegoat and stir up fear.

In a blatant political attack, Dutton accused the Victorian Labor government of telling police to “go soft” and called for tougher criminal sentencing.

Victorian Liberal leader Matthew Guy also chimed in, renewing his call for mandatory sentencing. This is all political posturing in the lead up to the Victorian state election in November.

But Victorian Labor has also gone out of its way to talk tough on crime, with Premier Daniel Andrews saying he would accept no excuses for offending and would, “make sure the arrests are made and people feel the full force of the law”. Deputy Premier James Merlino promised to “throw the book” at young offenders. And federal Labor leader Bill Shorten attacked Turnbull from the right for cutting funding to the Australian Federal Police.

Much was made of an out of control party in late December where Sudanese youth damaged a house in Werribee, generating days of media coverage.

But when 100 youths ran riot in the Victorian beachside town of Torquay on 4 January, throwing bottles at police and forcing them to lock themselves in their cars, it was barely reported. None of those involved were Africans or migrants.

Although they are over-represented in crime figures, Sudanese-born offenders make up only 1 per cent of those linked to crimes in Victoria. And overall crime in the state was down 6.2 per cent in the year to September 2017.

Even Victorian Police Chief Graham Ashton said claims Victorians were too scared to go out to eat were “complete and utter garbage” and declared “Victoria is one of the safest places in the world to live”.

The media frenzy was the latest in a string of scaremongering about “Sudanese gangs” in Victoria. In 2016 the media discovered the so-called “Apex gang” following a brawl at the city’s Moomba festival. They were blamed for a youth crime wave involving burglaries and carjackings.

Talk of the “Apex gang” was used as shorthand for African or “ethnic crime” to create a racist panic about migrants.

There was just one problem. According to police, “a large cohort of that gang was in fact Australian-born offenders.” Neither was Apex an organised crime gang with any formal structure or even gang colours. Police described them as simply a group of young people, “connected effectively by social media”.

Deputy Police Commissioner Shane Patton told a parliamentary inquiry there had only been 130 people involved in the gang. And by early 2017 it had effectively ceased to exist.

The media vilification of Sudanese communities has already led to a rise in racist attacks. Dave Anei, a South Sudanese man in Brisbane, filmed a torrent of racist abuse from a man who followed his wife and two children home.

There is already rampant racism and discrimination—particularly from police. “Young people of Sudanese background find themselves constantly being stopped [by police and]… randomly checked [to see] if they are gang members”, Deng Maleek, a South Sudanese youth worker, told the ABC.

Victoria police agreed to a settlement in 2013 with six young African Australians from Flemington and North Melbourne who took court action after facing constant racial profiling.

“I was pretty much stopped almost every second day for just riding the train or walking through the streets of Flemington”, Maki Isse, who was born in Somalia, told the media.

Discrimination has also led to a shocking unemployment rate of 28.6 per cent among people of South Sudanese background.

Many Sudanese migrants also arrived as refugees and are still affected by trauma from the decades-long civil war at home.

Dutton and Turnbull’s comments will only fuel racism. But Victorian Premier Daniel Andrews’ tough on crime approach won’t help either.

A protest against the criminalisation of African communities will take place in Melbourne on 4 February. We need to unite against the racism being whipped up by the Liberals and the media and demand funding for jobs and services for migrant communities.