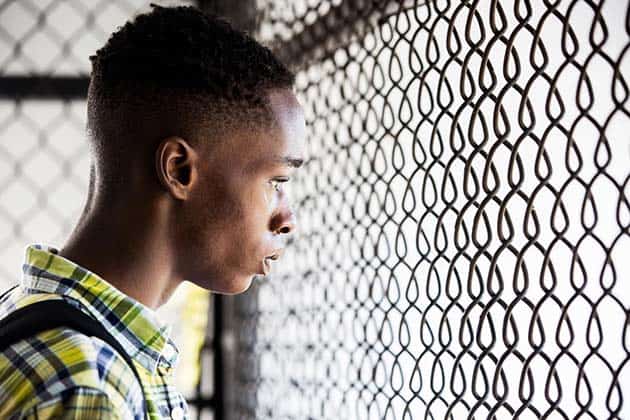 If the other Oscar favourite La La Land takes Best Picture over Moonlight, it will be a robbery. There is no question that Moonlight has much more to offer than a backward-looking Hollywood fairytale.

But for all the accolades and praise it has received so far, there really isn’t that much to Moonlight. One Guardian review proclaims “Moonlight portrays black gay life in its joy, sadness and complexity”. It’s hard to agree.

That’s not to say it’s a bad film—it’s beautifully shot and the acting is superb (particularly Trevante Rhodes as the grown up Chiron).

However, if you were hoping for a film that might give you a sense of what it’s like to grow up black, gay, and poor in the US, this isn’t it. That story primarily happens off screen. And that’s a shame, given that there are almost no other films about black gay men, and there are currently no black gay couples on US television.

Chiron grows up in Miami, Florida, with an absent father and a drug-addled mother (Naomie Harris). A chance encounter with drug dealer Juan (Mahershala Ali of House of Cards) and his partner Therese (musician Janelle Monáe) gives him his only semi-stable relationships and an early, positive affirmation of his sexuality. This is a welcome upset to the racist stereotype that black people are more homophobic than others.

But the film just leaves us with the moral quandary of the father-figure drug dealer rather than explore it. There’s no sense of why the drug trade might be so pervasive in small urban black communities with so little opportunity for employment (and in a place like Miami, where a white family has an average of 30 times more wealth than a black family).

Moonlight has a thin plot. It is more a stringing together of largely silent, artistic scenes of some important moments in Chiron’s life. And yet it evades many things that seem key—his mother calling him a “faggot” at a young age is only alluded to, as is the death of another character. This extends so far that his encounters with the under-funded and dysfunctional school system, the racist police, juvenile prison, and the drug trade, are just not explored at all.

There is no feeling for the structural racism that holds black Americans back—and why that makes being gay just that much harder for people like Chiron.

According to the Miami Times, police shot and killed 71 people in Florida in 2015, 32 of whom were black. Last year, police shot black man Charles Kinsey, a behavioural therapist, as he sat unarmed on the road trying to calm a patient. The policeman that shot him is still working and hasn’t been charged.

To be a young black man in Florida is to live in fear of trigger-happy police, and even more so for those in proximity to the drug trade.

Minor drug offences are part of the explosion in US prisoner numbers. The rate of black imprisonment increased 700 per cent between 1970 and 2005. One in eight black men go to jail in the United States, and black men are more likely to go to jail than graduate college. Black men receive longer sentences than whites convicted for the same crimes, and are less likely to be employed when they are released from prison.

Understanding that is part of understanding why Chiron’s options are so limited, but the film doesn’t even gesture towards such realities. Moonlight is a low budget film, but it’s not really forgivable to try to represent a life amidst this oppression without mentioning any of it.

The film’s main message seems to be that expectations of macho masculinity create a repressive atmosphere that can prevent men exploring their emotions and their sexuality.

Chiron’s extreme inability to come to terms with his sexuality is all too believable, and it’s a good story to be told after the arrival of equal marriage might have convinced people that being LGBTI is an easy road. Same sex sexual activity was illegal in Florida until 2003, and a ban on same-sex adoption was only repealed in 2015.

However even the question of sexuality is only explicitly mentioned once or twice. For a gay film, it’s not very gay. You almost get the impression that Chiron—and his love interest Kevin—are the only gay people in Miami. Reviewer Guy Lodge suggests that such sexlessness and ambiguity is part of keeping the story unthreatening.

There has long been a recognition of the connection between the struggle for black rights and liberation and gay liberation. Many of the main protagonists in the Stonewall uprising had marched in the civil rights movement. Their struggle convinced Huey Newton, leader of the Black Panthers, to say in 1970, “homosexuals are not given freedom and liberty by anyone in the society. They might be the most oppressed people in the society.”

A little more of Newton’s rage against oppression could have made this film a classic. The definitive story of black gay life and struggle remains to be told.