Editorial: Time to resist as Turnbull backs Trump and fans the far right 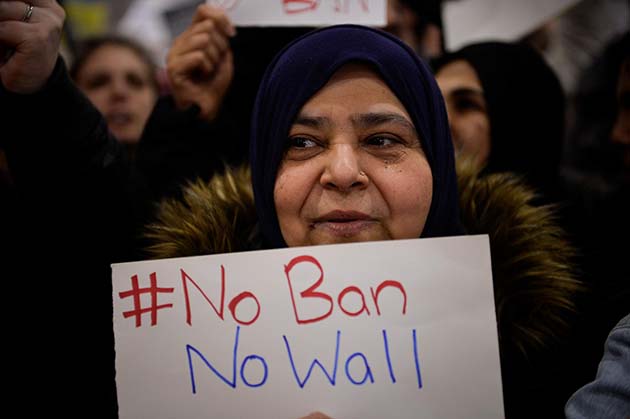 Donald Trump’s ban on Muslims and refugees entering the US has ignited demonstrations across the US and across the world. Malcolm Turnbull distinguished himself as practically the only world leader to support the appalling, racist ban.

Canada offered to accept refugees turned away by the US. Yet Turnbull praised Trump for his decision to “emulate” Australia’s policies and for his focus on “the importance of border security”. Treasurer Scott Morrison boasted that the US was “catching up” with Australia.

Turnbull is also desperate to avoid offending Trump, as he clings to the hope that the US will resettle refugees from Manus Island and Nauru.

Trump’s election victory has spawned a race to the bottom in Australian politics, with both sides of politics aping versions of Trump’s populism. Government-sponsored Islamophobia and scaremongering about terrorism is giving legitimacy to the likes of One Nation, Cory Bernardi and Liberal National Party MP George Christensen.

Cory Bernardi has now left the Liberals to form his own hardline Conservative party. One Nation and Pauline Hanson have climbed in the polls and are eagerly eyeing off the upcoming state elections in WA and Queensland where they hope to win seats.

Turnbull and the Liberals have given up any idea of putting One Nation last at the ballot box. Turnbull now says that One Nation “deserves respect”.

The preference deal between the WA Liberals and One Nation may well give One Nation the balance of power in Western Australia. One poll in Queensland has One Nation on 23 per cent, enough to beat their 1998 result when they won 11 seats.

Turnbull has unleashed Immigration Minister Peter Dutton to stir up racism and division. Late last year Dutton blamed the entire Lebanese Muslim community for terrorism in Australia, saying it was a “mistake” that any of them had ever been let into the country. Now Dutton is pushing for Trump-like powers, allowing him to target people from any particular country to review and cancel their visas. He told Sky News he is also considering a new, tougher citizenship test for migrants.

Like Trump, the government wants to present Muslims and refugees as threats that they will keep out of the country.

At the same time Turnbull is pushing savage cuts to welfare. He wants to cuts $3 billion in government spending. This comes hot on the heels of the Centrelink debt fiasco, with around 200,000 people receiving letters demanding repayment of fake debts.

He wants to make young people under 25 wait five weeks before they can access unemployment benefits, and force them onto the lower Youth Allowance payment, robbing them of $90 a fortnight. Also on the table are cuts to parenting payments.

While, so far, the cuts have been blocked in the Senate, the government’s response is to threaten to cut $3 billion from the NDIS.

Yet the Liberals are still pushing for corporate tax cuts to put $48 billion back into the pockets of the rich.

Along with refugee and Muslim-bashing, Turnbull is stepping up the union-bashing. After caving in to pressure from Turnbull, Senators Derryn Hinch and Nick Xenophon changed their vote. Now, the Australian Building and Construction Commission (ABCC) will come fully into force by September.

Everyone needs to get behind the CFMEU construction union’s campaign to fight the ABCC.

At an Adelaide construction workers’ rally, CFMEU national secretary Dave Noonan said the union was, “going to the streets…We’ll be back right across Australia and the industry will stop and workers will go to rallies and they will say enough is enough.”

These words have to be turned into action. This is the kind of fight that can beat back Turnbull and the right.

The Palm Sunday rallies for refugees can be major demonstrations to finally close the detention prisons on Nauru and Manus Island.

The real threat to jobs and services for working class people comes not from Muslims. It comes from corporations and governments greedy for profit.

We need to build every bit of resistance to Turnbull and Trump. And build a socialist organisation that fights to link the fight against racism with the fight for jobs, union rights and funding for schools, hospitals and universities.

The demonstrations against Trump have been an inspiration for everyone who wants to fight for a better world, free of racism, sexism and the threat of war. If you want to be part of that fight, join us.