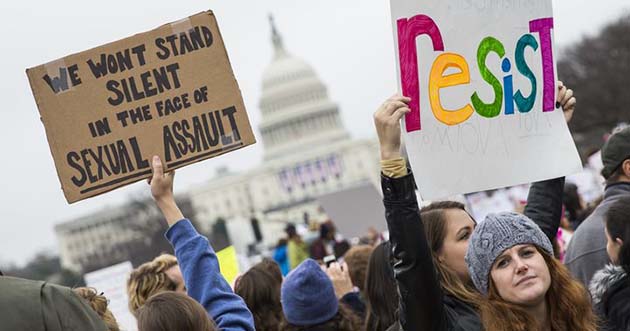 #MeToo shows how pervasive sexual harassment and abuse are in the lives of all women. The hashtag, started by actress Alyssa Milano, went viral after a series of accusations of harassment, assault and rape were levelled at millionaire movie producer, Harvey Weinstein, with nearly a million tweets in the first 24 hours alone. Weinstein had, over several decades, used his position to abuse mostly young female actresses, whose careers he would destroy if they rejected his advances or spoke out.

The Weinstein case is just the tip of the iceberg in an industry where wealthy sexual predators operate with impunity. Similar accusations have been made of Bill Cosby, Woody Allen and James Toback, which all bear a horrific resemblance to those made against President Trump.

This same culture of entitlement, abuse and cover-up exists in Australia universities, particularly the elite colleges, which protesting Sydney University students have consistently drawn attention to.

Sexual abuse and harassment is also rampant in the lives and workplaces of women all over the world—not only in places like Hollywood where power imbalances are extreme. One in three women in Australia has been harassed or assaulted at work.

It is absolutely important to challenge the sexist behavior of individual men whenever it arises. But often the response around the #MeToo campaign was to declare that men were the problem, and demand they do more to call out sexist individuals. This will not end sexism or sexist violence.

Sexism is not the product of the ideas or behavior of men, and is not something innate. As the revolutionary Karl Marx said, “it is not the consciousness of men that determines their existence but their social existence that determines their consciousness”. This means that people’s ideas are a product of their environment, not the other way around.

Sexism is the product of an economic system built on exploitation and oppression, and is rooted in the nuclear family. Capitalism requires that the next generation of workers be raised and reproduced within the private realm of the home, at virtually no cost to the state or capitalists. Historically, women have done the bulk of this labour, raising children, cooking and cleaning. It’s estimated that the unpaid labour associated with childrearing saves the Australian state $345 billion every year.

But the fact that most women also work outside the home for a wage, and do not fit the stereotype of the mother and wife in general, means that this ideal has to be constantly reinforced from the top of society through the media, the legal system and the education system. The government’s horror around Safe Schools, which teaches students about gender and sexual diversity, shows how much they rely on gender roles to keep the capitalist system functioning. Hollywood, at the centre of the Weinstein scandal, routinely portrays women as little more than doting mothers or sexual objects, as do many advertisements.

Women and girls are constantly being told that they are less capable and worthy than boys and men, and internalize many of these ideas.

Ruling class women also face sexism. Former Prime Minister Julia Gillard was subject to a barrage of sexist abuse by right wing opponents and media pundits. But wealthy women are able to protect themselves from the worst aspects of sexism. They can hire people to do the domestic work. They have the financial capacity to leave the family home and aren’t forced to work in unsafe conditions, so are less vulnerable to violence. They are also able to more easily access abortion and proper healthcare.

Furthermore, ruling class women benefit from the oppression of women generally and the exploitation of all workers. Billionaire Gina Rinehart lamented the fact that she can’t pay her workers $2 a day. Pru Goward oversaw cuts to domestic violence services. They also, therefore, have a stake in perpetuating the sexist ideas that allow the system to function.

The role that working class women play in the home means that they are more likely to be in casual or part time work, paid less overall and be economically dependent on their partner. This means they are more vulnerable to domestic and sexual violence, both in the home and the workplace.

But it also means that working class men have to work longer hours to make up for their partner’s lower income. Working class men also have a material interest in fighting sexism; fighting for free childcare and public services, equal pay and against the bosses that exploit and divide us all.

United working class activity has the capacity to cut through sexist ideas far more than any hashtag. As Egyptian revolutionary Mahienour El-Massry put it, after women played a leading role in the 2011 revolution, “with time society starts looking at you not as a woman who is weak and needs help, but as a human.” A strike isn’t a revolution, but fighting alongside someone for a common interest can have a similar effect.

Sexism is not natural or eternal, and it can be beaten back. But to get rid of sexism entirely, we have to overthrow the economic system that produces it.