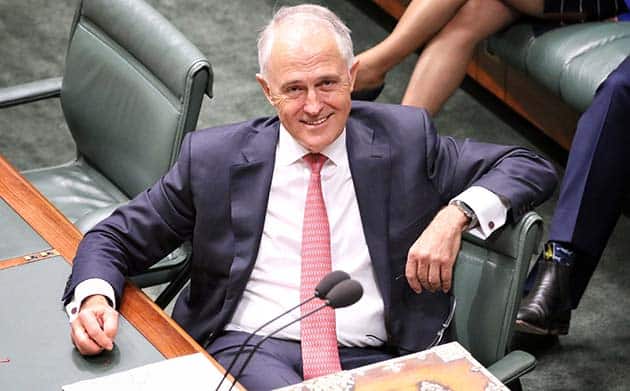 Malcolm Turnbull and Scott Morrison have delivered a budget aimed at avoiding unpopular cuts, in a desperate effort to reverse their slide in the polls.

The pundits say it’s a budget Labor could have delivered. But its tax increases deliver no real pain for the rich. Instead ordinary workers and the unemployed are being targeted.

This is not a big spending budget that will do anything serious to improve services.

Morrison has made it clear that the purpose of increasing tax is to reduce the deficit and “keep the balanced budget on track”. Over the next four years the government aims to reduce government spending to 25 per cent of the economy.

Where the budget does mimic Labor is in delivering cuts that rob Peter to pay Paul. As in the Gillard Labor government’s 2013 budget, the Liberals are cutting funding to universities to move money into schools.

But the funding increase is less than what Labor has offered, and will further gut universities by $2.8 billion, as well as forcing students to pay higher fees.

The government’s increase to the Medicare levy by 0.5 per cent hits workers with incomes as low as $22,000 to ensure it can fund the NDIS. But the “deficit repair levy”, which hit only high income earners on over $180,000, will be scrapped.

This means a tax break for high income earners for the next two years before the Medicare levy increase kicks in.

The banks face a new levy forecast to raise $1.5 billion a year. But with profits at the five big banks affected at $30 billion every year, this is a hardly a big hit. And the banks immediately threatened they would just pass the cost onto customers. Again, it’s workers not the rich who will pay.

And after the government covers what it is already handing back to business through its existing tax cuts, costing $5.2 billion over the next four years, there is not much of the new bank tax left. Over ten years the government plans to hand business back a gigantic $65.4 billion in tax cuts.

Living on welfare is already impossible. Now the unemployed face further punishment, with a trial of random drug testing. And those with recognised drug and alcohol problems can no longer gain exemptions from mutual obligation requirements. In addition there will be a new “three strikes” demerit system designed to cut more people off welfare payments. The government plans to save $632 million over five years.

Again the government has refused to tackle the massive tax breaks for the rich on either negative gearing or capital gains tax. These are the measures that have seen rich investors flock into the housing market, driving up the cost for home buyers to obscene levels.

The two measures combined cost government an enormous $11.7 billion a year, according to the Grattan Institute. The best Morrison can do is pare back some travel allowances and depreciation write-offs for investors, saving a piddling $250 million a year.

The housing affordability measures announced in the budget are a complete joke. The new “first home owner saver scheme” will do nothing to help home buyers. Like previous first home owner grant schemes it will simply push up the price of housing further.

A new National Housing Finance and Investment Corporation, talked up prior to the budget, gets a measly $63.1 million over four years to help finance low-cost community housing.

As business writer Michael Janda summed up Morrison’s housing package, “If it does make a difference, it may take a microscope to see it.”

Defence is one area where there is no belt-tightening in sight. Total spending will grow to $36.4 billion next year, an increase in real terms of 6.1 per cent.

This includes the first stage of a colossal $50 billion program to build 12 new submarines.

Australia’s part in the wars in the Middle East will cost another $903 million for the year. And the Australian Federal Police will get another $321 million to hire 300 more officers.

This budget is designed to undo the political damage from Abbott’s horror budget in 2014. But there is nothing fair about making ordinary workers to pay more tax given the billions in subsidies for the rich.

The government’s backdown on the freeze on the Medicare rebate and PBS co-payment increases show that the government is vulnerable to public pressure. An active campaign by university students and staff can force them to abandon their cuts and fees increases at universities as well.