Trump and the rise of fake news: How powerful is the media? 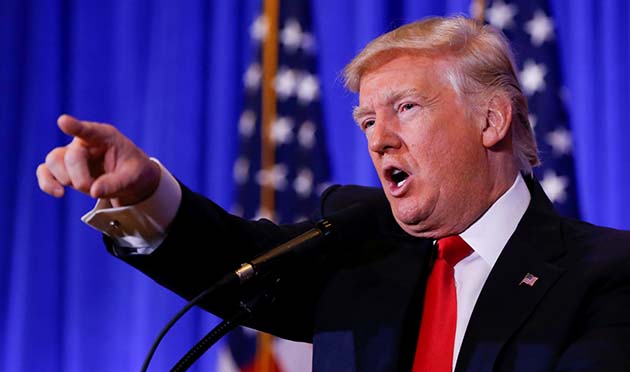 Trump’s attack on the media as “fake news” shows his authoritarian style, writes Miro Sandev, but the mainstream media itself reflects the values of the rich and powerful

Everyone is talking about “fake news”. Many people are using the term simply to refer to articles they don’t agree with. The Democratic Party and sections of the left have argued that Donald Trump won the presidential election because of the spread of fake news.

Trump, in response, refers to stories and polls that don’t support him as fake news. So what is fake news? Has the news ever not been fake?

The “fake news” label was created by the mainstream media to describe far-right fringe media like Breitbart and Alex Jones that supported Trump, sometimes with completely fabricated reports.

These included articles claiming the Pope had endorsed Trump, that Hilary Clinton had sold weapons directly to ISIS, and that Trump had sent his own private plane to rescue stranded US soldiers.

But in any case, fake news was not why Trump won. The main reason he won was the failure of Obama to change the status quo and of the Democratic Party to inspire voters with any sort of progressive agenda. So their traditional voting base stayed home.

It’s true that Trump was able to win some counties that had previously voted for Obama, and that he had more support from working class voters and union members than pretty much any other Republican candidate. But these were both minor stories in terms of the number of voters involved.

The major story was the millions of left-leaning people who did not turn out because they could not stomach Wall Street’s best friend Hillary Clinton.

However Trump does want to promote the “fake news” outlets that push his own right-wing worldview. He labels anything that is against him as “fake news”.

He cultivates the connections with Breitbart and other sources and uses Twitter to spread their influence. He prioritises taking questions from them and shuts down any voices that are critical in his press conferences. In that sense he is more authoritarian in his dealings with the media than previous presidents like Obama or even George Bush.

Still, Trump has no intention of destroying the capitalist media. In fact he is preparing a bill further deregulating the media industry, which will boost the profits of companies like Time-Warner, AOL and Verizon. He wants to make sure that the capitalist media serve him more often than he serves them.

Yet the whole concept of fake news suggests that the mainstream media is inherently truthful. This is a fiction. The capitalist media has been lying to people and pumping out fake news since it began.

You only have to think back to the Iraq War. The New York Times ran story after story in the lead up to the Iraq War arguing that Saddam Hussein had weapons of mass destruction (WMD) and was about to use them any minute on Western capital cities. So it was absolutely crucial that the US invade Iraq.

The TV networks all repeated these lies from the New York Times. Bush administration official Colin Powell was later forced to admit that there had not been any of these WMDs, and even some US officials apologised about misleading people. The New York Times refused to apologise about its deceitful coverage.

Mostly, however, the media presents a distorted view of the world through more subtle means. This can include leaving out certain kinds of stories, like examples of unions successfully fighting workplace exploitation, or the weight given to particular viewpoints and opinions.

We live in a deeply divided class society with a tiny minority controlling all of the wealth and power, suppressing the majority.

There are two major ways they do this. Firstly through direct coercion with the violence of the police, army and the courts. The second is through consent—if not outright positive consent, then at least indifference or apathy. This is where ideology, promoted by the media, comes in.

Workers are encouraged to sympathise with the problems of their bosses—how to keep costs down, increase productivity and sales. The school system, universities, churches, advertising are all engaged in spreading capitalist ideology.

CEOs and pro-business analysts are the standard choice for interview subjects, while union representatives or consumer groups hardly ever get a voice.

The ABC peddles the same lies when it comes to business reporting—when the stock market is up, this is reported in a way that makes it seem like ordinary people benefit from this too.

Strikes are portrayed as disruptive, damaging to the economy, and ultimately driven by greedy unions, or they are simply ignored.

The bias shapes the way journalists frame interviews. A completely different tone is used when interviewing a respected, mainstream politician or business leader compared to someone from The Greens or a person who challenges areas of bipartisan political consensus, let alone a left-wing activist or anti-capitalist. The latter are usually treated as extremists or labelled as a “controversial figure”.

The pro-capitalist bias is reflected in the reporting of left-wing demonstrations as well.

If the rally passes off peacefully, even if it is huge, then it receives basically no coverage at all. On the other hand, if there is some trouble or violence, the media will give it wall-to-wall coverage but will focus almost exclusively on that, rather than the size of the demo or what it is about.

All of this bias isn’t coordinated through some sort of central committee that sends out the line to journalists every morning. It’s not a conspiracy, because that sort of thing is not necessary.

Successful media people get where they are partly because they can sense the mood of the establishment, the ruling class.

They learn that in order to be successful you have to successfully censor yourself.

Murdoch is frequently presented as an immensely powerful media baron.

It’s true that Murdoch controls 70 per cent of the capital city newspaper circulation in Australia, and many of these papers set the agenda for the media cycle. But it’s not true that Murdoch dictates on all or even most questions of politics.

The 2013 election showed the limits of the influence of Murdoch’s Daily Telegraph in Sydney’s Western suburbs, where its readers are concentrated.

Despite a vicious campaign against Labor and Kevin Rudd, the swing against Labor in Western Sydney was smaller than elsewhere, and Labor held most of its seats there.

Murdoch has an interest in exaggerating his influence as it can boost sales of his products, but also actually give him more leverage over politicians than is warranted.

Quite often, what his papers do is sense which way the electorate is already heading and simply tail the electorate, predicting the result of the election and endorsing the winner beforehand.

Then people incorrectly attribute the election win to the support given to the party by Murdoch, when they probably would’ve won anyway, without the endorsement.

The political ideas of the mass of people are shaped by many factors, but the two most important ones are the ideas of the ruling class that they are bombarded with, and their own direct, personal experience of the world.

Generally, these two forces tend to pull in the opposite directions, and they produce in workers what Gramsci called “contradictory consciousness”.

This means that the strength of the media on a particular issue, at a particular time, will be related to how closely workers have direct experience of that issue.

A classic example is the issue of privatisation of public services. Pretty much all the mainstream media are in favour of privatisation and aggressively push it onto the population. But despite the propaganda campaigns, 80 per cent of people oppose privatisation because they have direct experience of the price increases when electricity is privatised, and of poorer services in other industries.

This points to the conditions in which the influence of the capitalist media would be at its weakest: when large masses of the population are drawn into direct action or struggle in mass demonstrations and/or strikes.

In these conditions millions of people’s direct experience, their own actions, would be the news story. If the media refused to report the struggle they would notice it and draw conclusions; likewise if the media tried to distort or misrepresent the issues or conduct of the protesters or strikers.

The masses in struggle would also likely be part of groups, networks, and organisations that would provide alternative information and generate and support oppositional views.

We can look to the experience of the Egyptian revolution to see confirmation of these ideas. The great demonstrations that toppled Mubarak were enormous, with millions of people participating. The regime got spooked and responded by shutting down the internet networks in the whole country.

Mubarak also forced phone companies to pump out pro-regime propaganda to people’s mobile phones via text messages. But despite this—or maybe because of this—the revolutionary demonstrations that followed were even bigger than they had previously been.

The regime had already lost control of the streets and the workplaces, so they were unable to roll back the revolution simply through media propaganda. This is the only way to defeat fake news of all kinds—through the mass action of revolutionary workers.