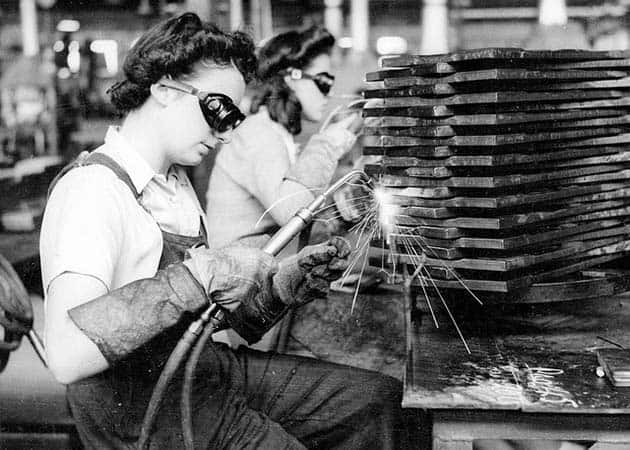 The Second World War saw a dramatic change in women’s role in the Australian workforce.

It was a dramatic challenge to the ideology and structures that excluded women from work and enforced gender segregation.

Equally dramatic but less well known was women’s response to their conscription into factory jobs previously performed by men for war production. They put to use their new social weight as workers, setting off an impressive wave of strikes to win equal pay and to improve working conditions, despite all the pressure to stay at work for the boys, and to help win the war.

Victorian-era moralism and ideology about sex roles and family roles was imported from England, but Australia had its home grown legal and industrial structures too.

The 1907 Harvester agreement established the concept of a “living wage”, designed for a male worker as well as his wife and family to live on. This enshrined the idea that men were responsible for wives and children, and therefore women were not entitled to the living wage.

This kept many women locked in dependence, and women and children who had been “deserted” or who didn’t have husbands in poverty.

In reality families could not survive on the so-called “living wage”. So in the first half of the twentieth century there was a slow but steady increase in women working. As early as 1927, about half of all factory workers in Australia were female.

This trend was a concern for the ruling class. A 1911 Royal Commission voiced concern that the crowding together of the sexes in factories had a “pernicious influence” and stimulated the sexual system. It wanted to discourage women from working in factories, disbelieving when a factory girl explained that domestic work was actually far harder. And it declared that, “No married woman should be allowed into a factory at all”.

When the Victorian Lady Teachers’ Association argued for equal pay, the Royal Commissioner replied, “Equality either from a physical or an intellectual viewpoint, cannot be accepted… [a woman] is, by reason of her natural frailty of body, unfitted to bear the physical strain inseparable from the vocation of a teacher…”

Where women competed with men for the same job they were paid a male rate. Where they were working in different roles, their wages were fixed separately by the court based on “the class of work in question.” So an elaborate and absurd division of men’s and women’s work developed. Clothing, textiles, shoes and food preserving was women’s manufacturing work. But in the 1920s and 1930s the men’s world of metal work and engineering was open to women only in the roles of “light repetitive work” such as core-making, drilling and assembling.

There was an acute shortage of labour as the armed forces and defence production expanded. Cabinet endorsed “the extensive employment of women”. The Women’s Weekly announced, “Australia is calling on her women as never before”.

In a reversal of the assertion that factory work was the road to sexual depravity, Women’s Weekly said, “You’ll find it no harder than your house job. Easier perhaps. In fact, many war production factories, with their spic-and-span canteens, bright music and carefully-planned rest breaks are more fun to work in than any house.”

The kinds of work women were doing changed; from isolated self-employment as domestic servants to mass production in factories alongside thousands of others. This category increased from 64.5 per cent to 80.1 per cent of the female workforce between 1939 and 1943, while domestic servants declined from 18.3 per cent in 1939 to 5.9 per cent in 1945.

Married females’ participation rate more than doubled between 1933 and 1945.

The decrease in the male proportion of the workforce was most marked in government munitions factories and in banking and insurance.

In the metal industry, where a massive increase in demand for war equipment and munitions combined with large numbers of men leaving to go into the armed forces, the number of women rose from 1375 in 1933 to 52,847 in 1943.

Employers and the government insisted that this was temporary.

A Women’s Employment Board (WEB) determined scales for women entering “male” jobs during the war and for six months afterwards. But this gave it jurisdiction over only 7 per cent of employed women.

Mostly they set the rate at 90 per cent, sometimes 80 per cent, and in a few cases, such as tram conductresses, clerical workers, and some retail work, 100 per cent of the male wage. The WEB commissioners were forced to admit, despite themselves, that women:

But the confidence women gained from being essential to production, and the arbitrary nature of wage rates, led to a wave of militant strike action to fight for equal pay, pay rises and better conditions.

The Small Arms Ammunition Factory in Footscray was a pre-war employer of women, so the pay was lower than in other munitions factories where the WEB had set the rate. Several thousand male and female workers held a stopwork meeting in early 1943, demanding the 90 per cent rate for females. More than 2000 women from other government factories joined them on strike.

These strikes were without success. But they did succeed at Simmonds Aerocessories in South Melbourne. Here Simmonds refused to pay the rate awarded by the WEB. So 132 women sheetmetal workers struck for over four months during wartime. The case went as far as the High Court before the company capitulated and paid the 90 per cent rate.

When Amalgamated Wireless Australia in Ashfield refused to pay a pay rise granted by the WEB, 150 women in the aircraft assembly section joined the Amalgamated Engineers Union. When the Board arbitrarily decided that only 75 per cent of them were entitled to the WEB rate, a three week strike followed. Eventually they were “prevailed upon” to return to work while legal action unfolded.

Labour historian Daphne Gollan has written that, “in New South Wales, during the 20 months ending August 31 1944, there were 1,432 industrial disputes involving 588,951 workers and resulting in a loss of 1,461,671 man-days—or as was more frequently the case, woman days.”

Employers were particularly obsessed about keeping down women’s wages. This was despite the government agreeing to foot the bill for all manufacturing costs during the war, including any wage rises. They were very forceful in reminding women that the break in sex role segregation was a temporary evil for the war.

Strikes were often more successful than the protracted court and commission process. When a Sydney company, Richard Hughes, refused to pay the WEB rate, the case dragged through the courts for over six months, with the company repeatedly appealing to different bodies.

By June 1944 it had become obvious to the workers that they were getting nowhere. A strike and lockout led quickly to a settlement involving $6000 in back pay.

There is a lesson here for today’s campaign for equal pay for childcare workers. Unions have run court cases and community campaigns, but not organised the industrial action with the power to force rapid gains.

The level of industrial militancy was particularly impressive when you consider the forces aligned against women. The entire establishment as well as union leaders and the Labor Party were solidly behind the war effort. Once Russia joined the war the Communist Party threw their weight behind it too, using their considerable influence among radicals in an effort to keep industrial peace.

The pressure to think of the war effort, and accept sacrifices, was immense. But it could not erode the new found confidence that women felt.

For example, following the failure of the employers to pay the awarded 90 per cent at a Footscray munitions factory, the (male) secretary of the union assured women they would get their money and urged them to return to work for the sake of “the boys in the trenches”. Women responded angrily with shouts of, “We know all about the boys in the trenches … they’re our husbands and sons”. Three days on strike resulted in Prime Minister Evatt agreeing to pay them the wage rise until the employers agreed.

The Clothing Trades Union had a policy of no strikes during wartime. A statement from the leadership claimed that, “in so far as the men were concerned, this objective was largely achieved”.

But it bemoaned the fact that: “Circumstances in regard to female employment are totally at variance to those surrounding employment of males and the result has been somewhat disastrous.”

Part of the reason for their greater militancy was that women were not constrained by a tradition of deference to the union bureaucracy or official union structures.

In some instances there was solidarity forged between men and women workers, for instance in the Engineers Union and the Sheet Metal Workers Industrial Union. But where unions would not lead action, women were prepared to act themselves. Young women workers at the Berlei factory used the technique of the classroom, passing notes from machine to machine to elect representatives and agree to a stopwork.

This organising in opposition to a union and political left leadership that almost entirely got in their way is a reminder about workers’ capacity for self-activity and struggle.

But the lack of union and political traditions also had a serious draw back. It meant that the lessons of the magnificent strike wave were not generalised in a way that could go beyond the immediate battles to a broader and more conscious effort to destroy sex role segregation and pay inequality at the time.

But this history should be an inspiration in the continuing fight for equal pay and against sexism today.