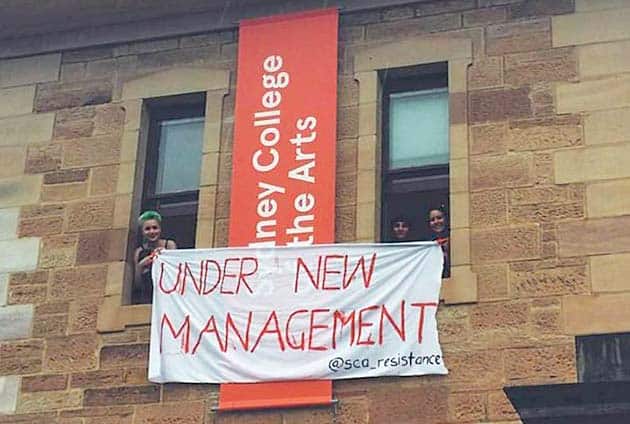 “We have broken the record of the longest student occupation at Sydney University—Political Economy was occupied in 1983 for ten days”, said occupier and SCA postgrad student Cecilia Castro.

Students are holding the top level of the administration building at SCA, which includes the office of Dean Colin Rhodes. The university wants to close their Callan Park campus, move students to the main campus and slash jobs and facilities.

Tamara Voninski, a PhD student at SCA told a support rally, “We have staff jobs to save, and facilities like glass, ceramics and jewellery to keep within our studio based art practices. Taking away 60 per cent of our staff, and the campus, and our facilities, and 2017 enrolments for the BVA (Bachelor of Visual Arts) is wrong.”

SCA students have already staged one student strike, rallying on the main Sydney University campus with staff unions, the NTEU and CPSU, of 400 people.

They have also held actions to disrupt university Open Day and an Alumni morning tea.

The occupation has further stepped up the campaign. “We wanted to make it clear to the university that if they didn’t meet our demands then we were going to escalate the campaign”, SCA student and occupier Suzy Faiz told Solidarity.

Support for the occupation has flooded in, along with widespread media coverage. Students have addressed MUA stopwork meetings and received visits from MUA and CFMEU members, as well as a delegation of UNSW art students. The MUA and CFMEU have donated $1000 each, with $200 more from the NTEU at UNSW. The MUA also donated another $1000 to commission a painting about the struggle.

In reprisal, the university attempted to suspend the swipe card access of two occupiers who are postgraduate students, Cecilia Castro and Eila Vinwynn. This prevented them entering 24 hour studios and study spaces. But a day later they backed down.

Ben Quilty, a former SCA student and Archibald Prize winner, visited the campus during the occupation, saying, “I’ve come to tell you all not to give up”.

The campaign is pushing more and more people to publicly condemn the university. Even a former Arts Minister for thee NSW Liberals, Peter Collins, has attacked the university’s plan.

Their initial plan to close SCA and fold it into UNSW has already collapsed and the university is under enormous pressure. Even its financial justification has come under question, after documents surfaced detailing the Callan Park site’s handover in 1991. They show that the state government pays for the bulk of the upkeep of the buildings, discrediting the university’s claim that the site costs too much to maintain.

The challenge now is to widen active support—particularly on the main Sydney University campus, where the heart of university decision making lies.

Student activists have been holding an “Occupation consulate” to build support there. At least ten classes as well as staff in the School of Literature, Arts and Media have held photo actions to support the occupation.

“The consulate’s been getting lots of support and it goes to show that people are seeing it as a fight for SCA but also a fight for all students and all staff”, student activist Sophie told Solidarity.

“There’s been 60 staff cut at the student centre, but also the merger between the Faculty of Social Work and the Faculty of Education with Arts and Social Sciences.” Around 150 people attended a support rally on the main campus on 7 September.

The SCA campaign can become a focus for the anger at cuts right across the university. Escalating on the main campus towards the same kind of militant action seen at SCA through the occupation can build the pressure on the university.

Further student strikes at SCA will also deepen the crisis for the university. While the immediate aim is likely to be another one day strike, the rally on 7 September heard from a PNG student activist, involved in a six week boycott of classes there this year.

While staff have also joined and spoken at rallies, some have been intimidated after being told they cannot speak out. But the university’s EBA guarantees the right to criticise the university, even on “operational matters”. Industrial action by staff could bring SCA to a halt.

As Tamara told the student rally, “To the university management I say we are not finished, we have only just begun.”