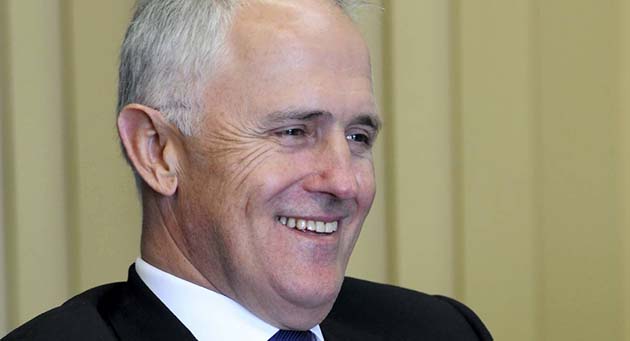 In his first speech after becoming Prime Minister, Malcolm Turnbull reiterated that he is very much a Liberal, despite his differences with Abbott’s inept leadership style.

He promised, “A thoroughly Liberal Government committed to freedom, the individual and the market.”

Turnbull is fully committed to delivering policies that benefit big business and the rich through cutting spending and delivering “economic reform”. His multi-million dollar fortune means he is one of them himself.

His criticism of Abbott was not over his policies, but that he was unable to make “the Australian people understand” the need for savage budget cutbacks.

As an example Turnbull held up New Zealand Prime Minister John Key, who, he said, “has been able to achieve very significant economic reforms in New Zealand by…explaining complex issues and then making the case for them.” Key has succeeded in increasing the GST, cutting income tax for the wealthy and made it easier to sack workers.

Turnbull’s views on social issues are not as left-wing as some make out. He has pledged to maintain Abbott’s plan for a popular vote on same-sex marriage, designed to delay it as long as possible. And his personal support for same-sex marriage is in line with Conservative Prime Ministers David Cameron in Britain and John Key in New Zealand.

On climate change, while he was prepared to negotiate with Labor in 2009 over an emissions trading scheme, Turnbull demanded large increases in compensation for carbon-intensive industries. Now he has committed to maintaining Abbott’s pro-business “direct action” policy, which has no chance of meeting the government’s 2030 targets.

Turnbull’s own record shows his willingness to force through cuts and sackings. As Communications Minister selling Abbott’s cuts in November 2014 he bluntly stated, “The savings that the Government is requiring of the ABC will result in a number of job losses.”

This involved cutting $254 million and 400 jobs. When the Friends of the ABC criticised the cuts he sneered, “Haven’t they read Mr Hockey’s speech? The age of entitlement is over. Cuts have to be made to the ABC in the Budget.”

He also informed us that, “I support unreservedly and wholeheartedly every element in the Budget.”

Turnbull, not surprisingly, thinks that government should play a minimal role in a capitalist economy. When he was leader of the Liberal Party in 2008, he criticised then Prime Minister Kevin Rudd for his spending to counter the Global Financial Crisis.

Turnbull wrote in May 2009, “the proposition that the global financial crisis was caused by wicked neo-liberal governments deregulating their financial markets and ‘letting the free market rip’ is nonsense.” Instead he lauded moves, “towards more open markets and greater economic freedom, including greater free trade.”

Despite being raised by a single dad, Malcolm was still able to go to private schools. At university Turnbull was far from struggling with student poverty. He bought his first investment property, sold three years later for a tidy profit, while living in an apartment owned by his father in the exclusive suburb he still calls home, Point Piper.

Turnbull has decided to keep living in his current $50 million mansion, rather than move into the Prime Minister’s residence at Kirribilli House just across the harbour.

He became a lawyer but left the bar in 1983 to work for Kerry Packer, owner of the Packer media empire.

Then he set up his own law firm, followed by an investment banking firm and later became a managing director and partner at Goldman Sachs Australia.

Goldman Sachs was mired in controversy during the Global Financial Crisis for its dealings in subprime mortgage loans and its influence on government. When Greg Smith, executive director of Goldman Sachs of New York, resigned in March 2012 he wrote that, “I can honestly say the environment now is as toxic and destructive as I have ever seen.”

Much of Turnbull’s fortune was made from the sale of internet company Ozemail. Another of his companies, Axiom Forest Resources, conducted clear-fell logging in the Solomon Islands in the early 1990s. The Solomons’ PM Malaloni threatened to close it down for “constant breaches of logging practices.” One report said his company had forest practices “amongst the worst in the world”.

When Turnbull wanted a seat in Parliament in 2003 he was able to spend $600,000 on his campaign to “win” the seat of Wentworth.

By 2010 he and wife Lucy, a businesswoman in her own right, were worth $186 million, with Malcolm the only politician in the Business Review Weekly’s Rich 200 list. He was the richest man in Parliament until Clive Palmer was elected in 2013.

Malcolm’s market-driven agenda will have to be fought every bit as hard as we fought Abbott.