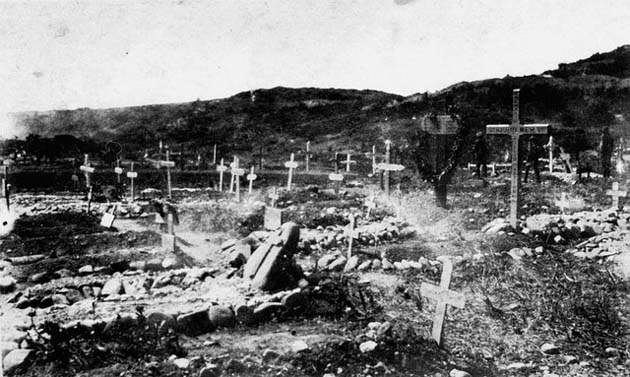 The sheer scale and futility of the slaughter at Gallipoli and the Western Front have been a source of horror for 100 years.

Alec Campbell, the last surviving veteran of Gallipoli until his death in 2002, was one. Campbell became a socialist, trade union militant and president of the Tasmanian branch of the Australian Railways Union.

According to historian Rowan Cahill he considered going to Spain during the civil war to fight Franco’s fascists. He opposed the Vietnam War and, when asked about the Anzacs’ achievements replied, “For god’s sake, don’t glorify Gallipoli—it was a terrible fiasco, a total failure and best forgotten”.

“He used to say that while he was serving in the war he was trained to hate the enemy, but later he really grew to understand that they were just young blokes who were the same as him,” his son told the media shortly before his death.

More strident still was Gallipoli veteran Hugo Throssell, who declared in 1919, “The war has made me a Socialist. It has made me think and inquire what are the causes of wars. And my thinking and reading have led me to the conclusion that we shall never be free of wars under a system of production for profit”. Throssell was a distinguished soldier, one of only nine Australians awarded a Victoria Cross for bravery at Gallipoli.

After his initial enthusiasm for war, Throssell lived through some of the worst slaughter at Gallipoli and saw his brother killed in action in Palestine. Injured, he ended up suffering from post traumatic stress and meningitis.

Already disillusioned about the war, he met and married Communist Party activist and author Katharine Susannah Prichard. After finding it hard to get work during the Depression, Throssell committed suicide in 1933, in the hope his death would see the government grant his wife and child a war pension.

He wrote on the back of his will, “I have never recovered from my 1914-18 experiences”.

He was just one of millions whose lives our rulers destroyed in the name of imperialism and profit.

On the eve of the outbreak of World War I, the British Cabinet was deeply divided. While PM Herbert Asquith was for war against Germany, a large proportion of the Cabinet members were opposed.