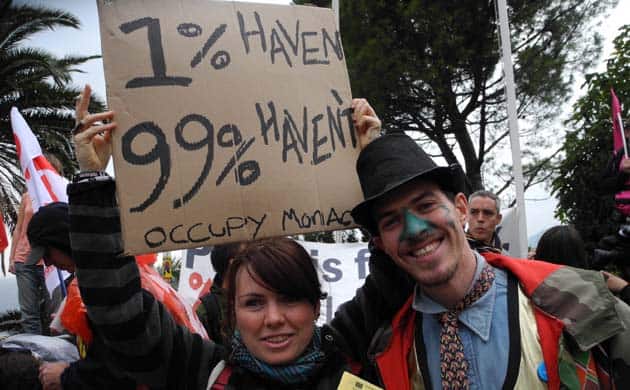 The Abbott government will soon release its tax reform discussion paper. Government backbenchers have been getting in early, floating ideas about expanding the GST to include fresh food, education and health spending. There have also been mutterings about increasing the rate.

The developed capitalist world crisis is beginning to hit Australia and this, coupled with the end of the mining boom, is reducing company tax collections. Increasing unemployment and wage growth below inflation are also cutting into salary and wage tax collections.

Expanding the GST and increasing its rate are one way to shift tax burdens even further onto workers and the poor.

There are alternatives. The United Voice commissioned Tax Justice Network report into tax avoidance by big business in Australia, Who pays for our Common Wealth? has shone a light into very dark corners.

This is in part due to tax avoidance. For example, 57 per cent of the top 200 ASX-listed companies have subsidiaries in tax havens.

Then there is the use by business of concessions in our tax laws, which result in forgoing over $10 billion in revenue.

Take mining companies as an example. Fortescue Minerals Group has, according to the Australian Financial Review, paid no income tax in the last 18 years and, given accumulated losses, is unlikely to in the next few years. No wonder Twiggy Forrest can afford to be such a magnanimous philanthropist as his companies continue to plunder Aboriginal land. Media reports suggest Clive Palmer’s mining companies haven’t paid income tax in the last six years.

Former KPMG tax partner and current Commissioner of Taxation Chris Jordan has cut the number of ATO staff by 3000, about 12 per cent of the workforce. There are plans to cut staff numbers by another 2000.

On my conservative estimates of a one-to-five ratio between ATO expenditure and revenue collected at the margins, these staff cuts will reduce revenue collection by $2 billion. However insiders are suggesting that with the departure of so many experienced staff in key areas like compliance, the main beneficiaries of the staff cuts will be those big businesses avoiding tax.

Who pays for our Commonwealth Wealth pointed out companies parading as trusts to avoid income tax. Taxing trusts as companies is not an outrageous suggestion. The current Treasurer Joe Hockey suggested it in 2011.

There are other issues. Profit shifting across borders is rife, while the ATO has drastically reduced its international expertise.

Digital companies like Google can use tax treaties based on outdated 19th century concepts of physical presence to avoid billions in Australian tax. It may be that eventually the OECD and our treaties catch up with this, ten or twenty years after the event.

Neo-liberals argue that tax avoidance is good for the economy, “encouraging productive entrepreneurship by the top end of town”. The millions of Australians facing a $5 GP co-payment, or $100,000 University degrees, or public hospital, transport and education cuts might disagree.

In any event this tax trickle down approach is not true. Ireland’s low company tax rate and its role as a quasi-tax haven didn’t protect its economy from the global financial crisis. Its economy went into recession in 2008 and has yet to really emerge from it. Unemployment in September this year was over 11 per cent, and almost 25 per cent for those under 25.

What can we do? We need a new program for taxing the rich and powerful. An effective minimum company tax system would raise billions.

A fee for the likes of Google and Apple operating in Australia based on turnover could recoup some of the income tax they avoid. A net wealth tax of just 1 per cent on the top 10 per cent of wealth holders would raise up to $20 billion a year. Abolishing business income tax concessions has the potential to raise $10 billion a year. Getting rid of superannuation concessions for the top 10 per cent of income earners could raise up to $15 billion, if coupled with an attack on other rorts like negative gearing.

Taxing the rich beneficiaries of company tax avoidance could see for example those on income greater than $300,000 (less than 1 per cent of income earners) taxed at 100 per cent on their income above that level, with steep levels introduced from over $150,000. And more, not less, staff for the ATO to catch the tax avoiders is an absolute necessity.

The Labor and Liberal Parties, the parties of neo-liberalism, won’t fundamentally challenge the rich and powerful and their massive tax avoidance.

These big business tax leaners will continue to rort our tax system until we begin a real campaign to force them to pull their tax weight.

John Passant is an independent socialist, a former Assistant Commissioner of Taxation and tax lecturer.

Who will pay for the crisis this time?