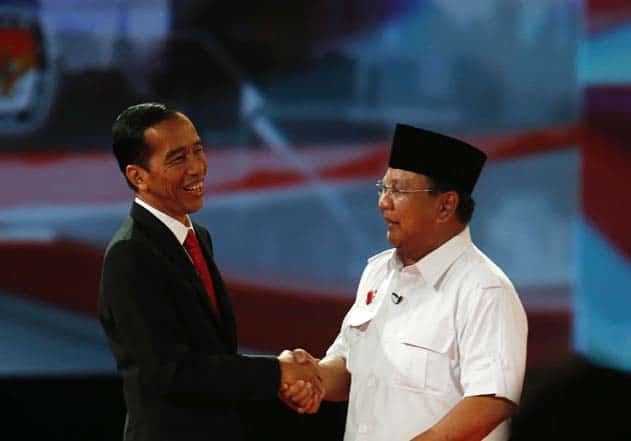 Joko Widodo (Jokowi) has claimed victory over former general Prabowo Subianto in a closely fought presidential election in Indonesian. However, Jokowi is expected to continue favouring big business and investors at the expense of ordinary people.

While both presidential candidates are claiming victory in the 9 July election, reliable quick count surveys have Jokowi and his running mate Jusuf Kalla won by about 4 per cent. Official results will be announced on 22 July.

Much of the left got caught up in supporting Jokowi, fearing that victory for Prabowo, an ex-general from the Suharto years, would mean a return to dictatorship.

Some claimed Jokowi was the more progressive candidate, citing limited reforms during his time as Governor of Jakarta. However, big business expects him to continue the favours it receives from government.

Investors both internationally and within Indonesia are excited by the prospect of a Jokowi government. Jokowi plans to build ten new industrial areas throughout Indonesia and will open the country further to investment.

Wages in Indonesia remain among the lowest in Southeast Asia, with many workers actually paid below the minimum wage. The recent conversion of agricultural areas into industrial zones has seen peasants aggressively stripped of their land with little compensation. This will continue as industry expands.

Jokowi, known as the father of low wages for his policies as Governor of Jakarta, will not significantly change the situation for workers and peasants in Indonesia. He has promised nothing to workers, beyond implementing some modest housing plans that were already the policy of the previous government. He has no plans to end the system of outsourcing and temporary contracts that leads to underpayment and uncertainty for workers.

Jokowi will also continue to use the police and army to repress workers fighting for better conditions. During his time as Governor of Jakarta tear gas and water cannons were used to break up peaceful strikes and protests.

While Jokowi himself does not have a military background, he received the backing of 35 generals, five of whom have also been accused of human rights abuses. Many West Papuans boycotted the elections altogether, with neither candidate supporting their demands for independence.

Several months ago Jokowi held a lead of almost 40 per cent over Prabowo. This whittled down to the point where the two candidates were almost even.

Prabowo and running mate Hatta Rajasa ran an expensive and dirty campaign. Prabowo owns more than $140 million and has assets in 26 companies, particularly in mining and agriculture. He also has ties to the family of former dictator Suharto, who amassed great wealth during his 32 years in power. Prabowo’s brother is also a billionaire and helped pay for his campaign. Two other Prabowo supporters own five of the television stations, with about 44 per cent of the country’s viewers.

Prabowo was willing to promise anything to win votes. He made speeches promising to crack down on corruption, claimed he would defend pluralism and the rights of minority groups, and made a pact with the major union FSPMI pledging ten policies to improve workers’ lives.

Yet several members of Prabowo’s coalition are themselves embroiled in corruption cases. He won the support of hard line Islamic groups who attacked religious pluralism during the campaign. Earlier this year workers at a company Prabowo majority owns were still fighting for five months of unpaid wages.

There is no doubt Prabowo’s many promises increased his vote. In a country riddled with corruption and poverty, many people were willing to listen to someone promising to be “firm” in tackling them.

Furthermore, Prabowo used nationalism, racism and other ugly tactics. A black campaign against Jokowi labelled him as Christian and Chinese. Both are minority groups in Indonesia, with Chinese Indonesians particularly used as scapegoats in times of crisis.

Despite all this, Jokowi held his lead. One major reason was Prabowo’s alleged human rights abuses, particularly involvement in mass killings in East Timor and the kidnapping of anti-Suharto activists in 1998.

Prabowo’s refusal to accept the initial counts has sparked fears he may try to tamper with the vote counting. The democratic process must be defended against any attempts Prabowo may make to overturn the result.

But the left should have no illusions or false hopes in a Jokowi government. He will not significantly cut down on or overcome issues of corruption, poverty or human rights abuses of his own accord.

Real change in Indonesia can only come from below. The workers’ movement has grown strongly in the last few years. As it continues to strengthen, it can offer a genuine alternative to the generals and businessmen that currently run the country.