In all likelihood, Labor will not be saved at the election by Kevin Rudd’s return. The hopes that Rudd could at least keep Abbott out are fading fast. Rudd’s standing in the polls is now lower than when he was dumped by the parliamentary Labor Party in 2010.

His “New Way” looks exactly the same as his old way and it’s going nowhere. When he first returned, Rudd talked for five minutes about tinkering with the cuts to tertiary education or maybe reinstating single parents payments. But that is all forgotten now. He is just as committed to economic conservatism and returning the budget to surplus as Abbott. 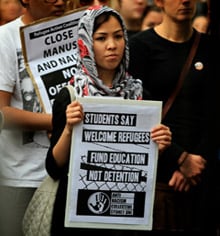 Rudd even seems to be distancing himself from the things Gillard could take some credit for, like the Gonski school funding and the DisabilityCare scheme. His attempt to outflank Abbott’s “stop the boats” slogan with the PNG solution has only angered and alienated a section of Labor’s supporters and failed to win voters back to Labor.

According to a recent Australian Council of Trade Unions (ACTU) poll, trade union members are more worried about job security and cost of living than they are about refugees. Public opinion does not support Abbott’s pro-business politics.

If, as seems likely, Abbott wins the election, it will not be because his politics represent attitudes in the community. It will be a reaction against Labor’s failure to deliver anything for its supporters.

Rudd’s attack on the Coalition’s plans to cut jobs and services could have had an impact but Labor has itself announced plans to sack a further 5000 public servants. Rudd’s conversion to supporting same-sex marriage is a welcome break with his past but in typical Rudd style all he is offering is a conscience vote that will be defeated just as it was under Gillard. He has attacked Abbott from the right over the parental leave scheme, because he won’t increase corporate tax.

Labor has legitimised Abbott every step of the way and handed him the initiative. This is the most obvious on refugees but it is also true over university cuts and single parent payments. And Labor helped fuel his climate denialism by introducing a useless carbon tax that turned some workers against climate action.

Abbott has led a vacuous election campaign, hiding his real plans for cuts and pro-business policies. But he is committed to axing 12,000 public sector jobs if he wins. Coalition Treasurer Joe Hockey told the Institute of Public Affairs in August that, “attacking spending” and “looking for structural saves” was “urgent”.

The Coalition will conduct a Commission of Audit in their first term to prepare the justifications for austerity. As the mining boom slows, there will be cost-cutting and job losses across the economy.
Abbott’s announcement that he will go even further than Rudd over refugees, by speeding up deportations, axing reviews of asylum claims and reintroducing Temporary Protection Visas (TPVs) shows his willingness to use xenophobia and play with human lives.

The Greens, after tying themselves to many of Labor’s failures in the minority government, have now distanced themselves, particularly to campaign over refugees. They are also clear where they stand on same-sex marriage and taxing the mining bosses. In the election, we should all vote 1 Greens, 2 Labor.

The NTEU and the ETU have rightly given support to The Greens this election instead of Labor. This is recognition that their policies are more in line with workers’ interests. It could be the beginning of a more significant left realignment if The Greens recognised the need to systematically relate to Labor’s working class base.

But it will not be what happens on September 7 that will be decisive. No matter which of the major parties wins, refugees and workers will lose.

If Abbott emulates Campbell Newman or Barry O’Farrell and embarks on savage cuts, the response of the unions will determine whether or not workers are going to pay for their budget crisis.
In Queensland, the huge potential to fight the savage job cuts was channelled into the courts and a “long-term” campaign to re-elect Labor. We can’t let that happen again.

Building the burst of enthusiasm against the PNG solution into a sustained campaign for refugee rights is entirely possible. There are openings to win greater support for refugees in the trade unions. A victory for the workers at Sydney University, and at the other universities can draw a line in the sand and build confidence for other workers to fight.

It will be this balance of forces—not the balance of power in parliament—that will determine how far Abbott, or Rudd, can get away with running capitalism at our expense.

Abbott ​fuels Reclaim Australia — the left ignores that at its peril

Abbott can’t hide his rule for the rich agenda

Tensions mount: Morrison tries to stop the media but he hasn’t stopped the boats