Last year Indonesia was shaken by a strike wave, as workers’ confidence to fight against low wages and insecure casual contracts grew. But in recent months the bosses and police, backed by the Indonesian government, have begun to crack down.

Several union activists and leaders have received summons notices in relation to a range of strikes, some dating back to 2010. Sulthoni Farras, a leader of the Indonesian union federation Progresip as well as a member of Indonesian socialist organisation KPO-PRP, is now formally a suspect of “misconduct” in a strike that took place in September 2012 in the industrial area of Bekasi, near Jakarta.

Another Progresip leader, Bona Ventura is facing charges of defamation, as are two KPO-PRP members in Yogyakarta. Another two union activists from the larger FSPMI union federation have also been told they are suspected of falsifying union documents. 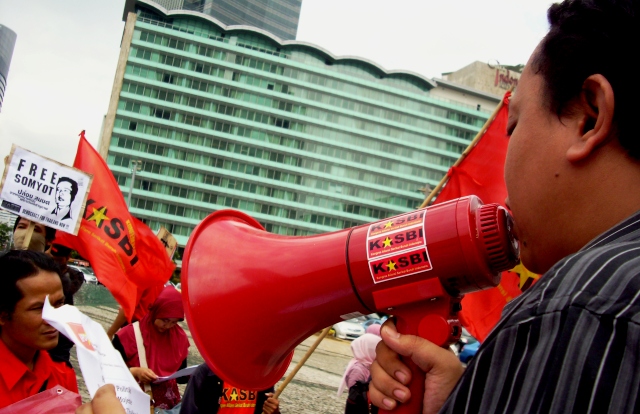 On the Sunday before he went in to face police 600 people rallied in Bekasi to demand the police drop the charges against Sulthoni, and another rally was held at the police station on the day.

Left organisations and unions from Australia and across Asia have also sent letters of protest to the police and to the Indonesian President.

In Bekasi in particular, demonstrations, actions, mass meetings and protests were an almost daily occurrence throughout 2012.

While the Indonesian economy continues to grow, Indonesian workers are fed up with the terrible workplace conditions. In particular there are protests against outsourcing and contract work, practices that make it very easy for employers to sack workers that unionise, using the excuse their contract has expired.

The other major issues are low wages, unpaid overtime, wage cutting, and employers failing to provide basic social security and welfare as required by law.

Indonesian union activists trace the rise in strikes to confidence workers across Indonesia have drawn from strike victories in recent years. In 2011 Freeport workers in Papua won large wage increases after months on strike and a trade union campaign succeeded in forcing the passage of a new social security law through parliament. This was followed on 27 January, 2012 with a mass strike demanding an increase in the minimum wage, blocking the large toll roads of Jakarta, and effectively paralysing the city.

Then, on 3 October, 2012 over three million workers took to the streets in a nation-wide strike to demand an end to outsourcing and low wages.

This resulted in another win, with outsourcing being made illegal and many local governments significantly raising the minimum wage. In Jakarta it was increased by 44 per cent. However, after an outcry from business, President Yudhoyono exempted labour-intensive industries like textiles, and small businesses, from paying the higher wages as well as allowing outsourcing to continue in five industrial sectors. But in 2013, as the cost of basic goods such as electricity and fuel continue to rise, workers still find it difficult to make ends meet regardless of any increase in wages.

Since October 2012, factory-based struggles have continued, often with workers from surrounding factories taking action in solidarity.

Lilis, who works in a Bekasi factory producing wigs, told Solidarity, “There are about 1000 workers in our factory, mostly women, and almost all of them have joined the union. We joined because we want all contract and casual workers to receive permanent positions. Also we are fighting for basic rights that include maternity leave, our uniforms be replaced every two years, and our meals provided without the money being cut from our wages.

“On September 7 we took strike action. And we won! They promised everyone would be made full time workers and we also won all the basic rights we had been demanding.”

However, since then not all these things have been implemented. There have been a couple of major setbacks for the movement. Many union leaders have signed an “industrial harmony” agreement with local authorities, employer organisations and police that restricts workers’ ability to strike or take other action.

Union activists have faced victimisation. In Lilis’s factory, she explained, “On December 6, we 12 organisers were called in by the police. They said that our action on September 7 had been illegal, so since then we have been banned from entering the factory.”

Another major problem is the use of thugs and even the army against the workers in an attempt to break the workplace unions.

The latest challenge is the legal crackdown on union activists. International solidarity will be important in ensuring that the bosses are not able to stifle the workers’ struggles in Indonesia.

Send messages of support to: kpo.prp@rakyatpekerja.org