Chavez wins election, but Venezuela’s revolution at a crossroads

Chavez’s margin of victory was slimmer than previously: 10 percentage points compared to 25 points in the 2006 election. It reflects growing frustration at the slow pace of change and the bureaucracy in Venezuela. There are growing debates inside the “Bolivarian process” that are linked with debates about reform and revolution and socialism from above or below.

Chavez has redirected some of Venezuela’s oil income towards important, popular redistribution programs. Under Chavez, Venezuela has become the least unequal country in Latin America, and has seen reductions in poverty and improvements in health and education. One million people have been lifted out of illiteracy. 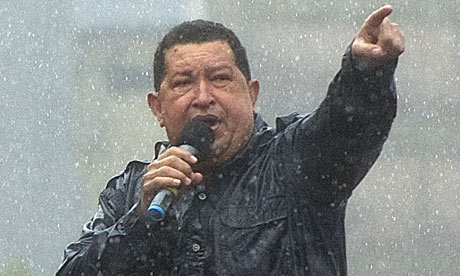 These advances have gone hand-in-hand with a push from below by workers’ movements and social movements. An attempted coup d’état by the right-wing in 2002 was defeated by the masses in the streets, and a bosses’ lockout and sabotage of the oil industry was also defeated by workers’ taking production into their own hands to keep it going. An attempted referendum to sack Chavez in 2004 was lost thanks to the activism of millions against the rich elites’ control of the mass media and huge resources.

Every election has seen a battle between the right-wing media and the masses on the side of Chavez. Many movements have taken a cue from Chavez’s declarations in support of socialism and workers’ control to occupy their workplaces and occupy land. There has been an explosion of alternative media.

The “communes” in the poor neighbourhoods (barrios) have been an important locus for this organisation.

Yet for all of Chavez’s talk of socialism, he is still running a capitalist state. Over the last few years in particular the contradictions and limitations of change from within the system have emerged more sharply. As the economic crisis has hit oil revenues, the government has implemented anti-social measures such as an increase in the consumption tax from 9 per cent to 12 per cent.

Despite the nationalisation of some industries under state control, the Venezuelan economy remains largely controlled by powerful private capitalists. In fact, according to figures produced by Venezuela’s Central Bank, the private sector has grown to account for 71 per cent of the country’s gross national product, a greater share than in 1999 when Chavez took office.

As a tendency inside the Chavista movement, Marea Socialiasta (or Socialist Tide), has pointed out, Chavez’s approach to important business sectors is one of conciliation.

Meanwhile, some state workers who have taken strike action have been denounced as “counter revolutionaries”. When metro workers in the capital Caracas were preparing to strike to defend a collective contract, Chavez threatened to put them under military rule.

Chavez has been able to maintain much of his popularity as he is seen as representing all the advancements made by the process.

But the erosion of the Chavista vote at the local and regional levels is the expression of anger at the bureaucracy and the “bolibourgeoisie”. Wearing red caps and shirts and talking of socialism, they made millions for themselves in corrupt government contracts letting services and infrastructure deteriorate. The lack of democracy inside Chavez’s party, the United Socialist Party of Venezuela, or PSUV, which grew to over four million members after its formation in 2005, has also prevented challenges to the bureaucracy’s control.

Some sections inside the Chavista movement talk about the need for a “revolution inside the revolution”. This is going to be crucial to defend the gains of the process and push forward.

The election may be over, but the struggle against the old right-wing and the new bureaucracy and “bolibourgeoisie”must continue. Organisation that can encourage the struggles of workers, peasants and students and push beyond the limits imposed by Chavez’s project is going to be necessary.

This can push to deepen the democracy in the workplace and extend the collectivisation under workers’ and peasants’ control.

As Rosa Luxemburg said, “Socialism will not and cannot be created by decrees; not can it be created by any government, however socialistic. Socialism must be created by the masses… where the chains of capitalism are forged, there they must be broken.”

Chavez once said that if he were assassinated, the people would know what to do: take the factories, the land and the neighbourhoods under their control. So why wait? The Bolivarian process has woken up powerful social forces that still have history to make.

By Pau Alarcon and Amy Thomas

Why you should be a socialist

Kazakhstan’s dictatorial leader, President Kassym-Jomart Tokayev, has re-asserted his control over the country with the aid of Russian troops at the cost of 227 lives.

Colombia paralysed by protests against tax hikes and inequality

Millions of Colombians, at times up to 10 per cent of the population, have been on the streets for over a month against attempts to make ordinary people pay for the costs of the COVID crisis by the right-wing government of President Ivan Duque.