The trial of three members of Pussy Riot has brought the spotlight onto the growing wave of political dissent in Russia. On August 17, Maria Alyokhina, Yekaterina Samutsevich and Nadezhda Tolokonnikova were sentenced to two years in a penal colony for performing a “punk prayer” in a Russian Orthodox cathedral in Moscow. The severity of the charges brought against them and the farce of a trial they endured has caused international outrage and divided opinion in Russia.

On February 21, five members of Pussy Riot broke into the Cathedral of Christ the Saviour and performed their “punk prayer” from the altar—urging the “holy mother/holy virgin” to “chase Putin out”.At first they were let go but in March Alyokhina, Samutsevich and Tolokonnikova were arrested and charged with hooliganism motivated by religious hatred or hostility. This carries a maximum seven years sentence.

Their performance was a political statement against the close relationship between the head of the Russian Orthodox Church, Patriarch Kirill, and the corrupt government of President Vladimir Putin. Patriarch Kirill supported Putin standing for a third presidential term and described the last 12 years of the Putin regime as “a miracle of God”. 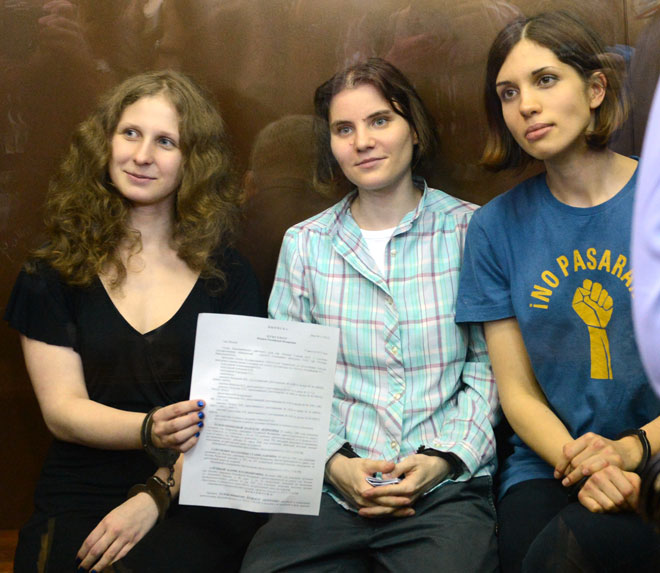 Their trial was a farce, with every effort put in to keeping politics out of the trial. In a written statement Tolokonnikova declared that the main point of the performance was, “a protest against illegitimate elections and Patriarch Kirill’s endorsement of President Putin.” But this statement (not to mention the statements from the other two women) about the politics of the case were ignored by the judge.

Out of 17 people the defence called, only three were allowed to testify. By day six of the trial, the defence had petitioned seven times that the judge be disqualified. According to the court’s rules, it’s up to the judge to decide whether they can be removed from the trial. Each time, judge Maria Syrova consulted herself and, after some deliberation, declined the motion.

Whilst the treatment of the three women is disgraceful, it is worth highlighting that they are just three of the many anti-Putin protesters that have been arrested or intimidated by the Putin regime in the last year.

Opposition movement
There has been growing opposition to the government since last year when Putin announced he would run for a third term as president.  The elections in December saw Putin’s party return with a large majority, but there was widespread electoral fraud.

Whereas in the past, such blatant vote rigging invoked nothing more than cynicism amongst the Russian populace, this time it has led to much more active dissent. In early February there was a demonstration in Moscow that attracted 100,000 protesters demanding fair elections (the third since December).
In May there was another 100,000 strong demonstration in response to Putin’s inauguration.

Two lines of riot police blocked the protesters from accessing the officially agreed route and rally point. Protesters attempted to break through the lines of police to assert their right to protest, which lead to hundreds being arrested and dozens hospitalised by police brutality.

Since then 14 of those arrested have been charged with provoking mass unrest and face two years in jail. It is clear that the government plans to make an example of them to try to intimidate the opposition.

Maria Boronova was one of those arrested in May. She has since had her house raided by masked men with Kalashnikovs when she was away. They confiscated family photos, laptops, and books. She has also been contacted by social services on the pretence that they are concerned for the welfare of her 5 year-old son.
The Putin regime has also brought in a number of laws that are clearly geared towards crushing dissent. The fines for “illegal” protests have been increased from the current maximum 5000 roubles to 300,000 for participants and 600,000 for organisers. Under the legislation, people could be fined for taking part in unsanctioned protests, or for violations during sanctioned ones. The government has also brought in internet censorship laws.

Putin has been able to maintain his stranglehold of power as long as the economy has been going well. But since 2008, the economy has slowed, unemployment and poverty has risen, and people are becoming increasingly angry with his regime.

Since the fall of Stalinism in 1991 Russia has been dominated by a tiny number of “new oligarchs” that amassed huge wealth and power through the privatisation of old state-owned firms.

The rising opposition that has been ignited by Putin’s return to presidential office has the potential to challenge the corruption and oppression of Putin’s regime. How Gorbachev failed to save Russian state capitalism

Mikhail Gorbachev was no hero. He tried to save Russian state capitalism at the expense of workers ... and failed.

Defiant protests across Russia say no to war

Since the start of the war, protests have been happening every day across Russia, from individual picketing to marches of tens of thousands.