The Olympics are surrounded in high ideals—but London has exposed the competitive nationalism and profit agenda behind it, writes Amy Thomas

The Olympic Games have been associated with some of the most inspirational moments in the struggle for black emancipation.

In August 1936, Jesse Owens humiliated Hitler by winning an unprecedented four gold medals at the Games in Berlin.

Twenty four years later Cassius Clay was crowned as the light heavyweight boxing champion in Rome. He was lauded on his return to the US, but still found himself refused service in “whites only” restaurants and targeted by racist gangs. Influenced by Malcolm X, he joined the Nation of Islam and changed his name to Muhammed Ali. At the height of his fame, he was stripped of his world heavyweight title for refusing to fight in Vietnam.

In the revolutionary year of 1968, in Mexico, following their success in the 200 metres, gold and bronze medallists Tommie Smith and John Carlos stepped onto the podium. As The Star Spangled Banner began, they proceeded to raise a gloved fist to symbolise their affiliation to the growing Black Power movement. If you look carefully at the image, you’ll see that the white Australian athlete, Peter Norman, who separated the two on the line is also wearing a round badge in support of his fellow athletes. The sporting careers of all three men lay in tatters but lifelong friendships were born. Smith and Carlos were pall bearers at Peter Norman’s funeral in 2006.

This year, Aboriginal boxer Damien Hooper stirred controversy by wearing an Aboriginal flag T-shirt as he walked into the ring. The mere acknowledgement of the existence of Aboriginal people and culture in Australia led to a flurry of condemnation. An International Olympic Committee (IOC) official declared that Hooper “did not understand the damage that could be caused” by wearing the flag. It was a powerful symbol in an era of assimilationist Intervention policies that are stripping Aboriginal people in the Northern Territory of their basic human rights.

Sore losers of a generation

But contrast these acts of defiance and solidarity with the rest of the London Olympics—and the history of the Olympics itself.

The Australian team have made a name for themselves in London as sore losers. Rower Josh Booth went on a drunken rampage through an English village after his eights crew finished last in their final, racking up $2600 in damages in broken windows, because, in his words, he was “disappointed and frustrated” with the loss.

References have been made to the Australian “disaster” performance in Montreal in 1976, after which millions were poured into the creation of the Australian Institute of Sport to rescue Australia’s sporting reputation. 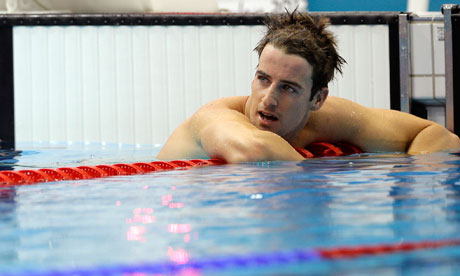 A 2009 government report, the Crawford report, proposed a revision of Olympic funding to more local sporting initiatives. But Labor has by and large rejected the report’s recommendations and reaffirmed their commitment to elite sports with a boost in funding in 2010. Nevertheless, John Coates, head of the Australian Olympic Commission, blamed the report for delaying the funding and said it come too late. Kevin Gosper, senior Australian representative on the International Olympic Committee said “money is the difference between silver and gold.” Wayne Smith, The Australian’s sport journalist, has predicted a backlash against Gillard over sports funding.

The medal tally has damaged the ability of politicians and sports officials to sell the glory of the Australian nation’s sporting prowess and celebrate our “national achievements”. Tellingly, Sports Minister Kate Lundy is worried the poor performance will hurt Australia’s reputation as a powerful nation on the world stage, saying, “For Australia, it is not just how that inspires people to play sport. It is how we look out into the world and what opportunities are derived from that.”

The Australian sporting elite’s tantrums expose the myths behind the Games. Rather than breed international friendship and solidarity, they encourage people to identify with “their” state against the rest, promoting nationalism.

Athletes compete for national teams, not individually. Every event ends in flag flying and a rendition of the winner’s national anthem during the medal ceremony.

Nationalism is used to foster a false sense of unity between governments and the rest of us, and distract attention from the real divisions in society between bosses and workers. Racism is the flow-on effect—already, two Olympians have been sent home for racist outbursts (a Greek who issued a racist slur to African athletes and expressed her support for the Greek fascist party Golden Dawn, and a Swiss soccer player who tweeted a racist comment about South Koreans).

The Olympics encourage national competition, and powerful states’ efforts to dominate others. In the words of George Orwell, sport “is war minus the shooting”. The 1980 Moscow Games, at the height of the Cold War, were boycotted by the US and 64 other countries. A tit for tat boycott of Los Angeles was subsequently mounted by 14 Soviet Bloc countries.

The myth of the “Olympic spirit” is symbolised by the oath taken on behalf of all athletes at the opening ceremony and the torch, nobly relayed from the ancient site of Olympia to the main stadium at every games. IOC president Jacques Rogge declared, for example, that London’s torch relay would “promote peace and make our world a better place”.

But the modern torch relay was invented as a Nazi propaganda tool at the 1936 Berlin Olympics—as was the parade of nations that is at the centre of the opening ceremony. Even after the Holocaust, the Olympics in 1948 maintained the torch relay and most of the elements of the Nazi’s Olympics.

In more recent decades, the Olympics have become the biggest advertising jamboree in the world. Starting with Ronald Reagan’s Los Angeles Games in 1984, host states now collectivise the cost of hosting the games, while the profits are privatised—and come tax-free.

In London, a fancy new Westfield shopping centre, “Stratford City”, has been marketed as the “gateway to the Olympics”. This is quite literally the case. The lucky few who have got tickets have been corralled through Westfield in order to reach the Olympic site, passing by huge outlets for posh retailers such as Gucci, Tag Heuer and Prada—designer clothes and flash watches that are well beyond the budgets of most people living in east London.

The International Olympic Committee has no shame in accepting sponsors who are antithetical to the supposed purpose of the Games. Well-known promoters of healthy living, McDonald’s and Coca-Cola, paid millions to be the official food and drink of the Olympics. The site includes the world’s biggest ever McDonald’s.

BP, whose annual carbon emissions are greater than 120 countries, is the “sustainability partner”. The outside of the Olympic stadium will be covered by a $10 million “wrap” paid for by Dow Chemicals. A subsidiary of this corporation, Union Carbide, will forever be associated with the world’s worst chemical disaster at Bhopal in 1984 which has claimed an estimated 25,000 lives.

The web site of London 2012 says that this Olympics will leave a “legacy” and “[provide] a catalyst for positive change and inspiration.” But while British people were promised that sporting facilities would be made available for community use after the Games, the huge stadium, paid for by taxpayers at a cost of $750 million, is to be largely dismantled and sold off.

The corporations are paying only 2 per cent of the cost of the Games. British taxpayers face the bulk of the $35 billion bill, more than the ruling Tories’ latest cuts to the welfare budget.

Most people will have no chance to enjoy what their money paid for, with the cost of tickets well beyond what people can afford. While the opening ceremony paid tribute to nurses in Britain’s National Health Service (NHS), few of them would have been able to afford a ticket: the best seats at the opening ceremony cost $3000.

Alongside the astronomical cost, few of the tickets for the most attractive events are even available for the public to purchase. Less than 50 per cent of the spectators at the 100 metre finals were ordinary people—instead they consisted of corporate sponsors and elites, so-called “Friends of the Olympics”. Many of them have failed to show up to their free seats. The embarrassed IOC has filled the empty seats with troops in civilian clothing.

A steady diet of pension reform, attacks on student allowances and cuts to public services are hurting British workers. Youth unemployment is 21.9 per cent. It’s only a year on from the riots that showcased the desperation in a divided Britain. Perhaps fearing similar scenes at the Olympics, London has invested in a weapon known as a sonic cannon that emits a pain-inducing noise that can be used to “disperse large crowds”.

In Greece, there are reports of people sleeping in old, disused Olympic venues from the Athens 2004 Games because of the effects of austerity. There is no reason to believe London won’t look the same in the near future.

A more commendable “legacy” is that left by the London Tube cleaners, who took strike action on the day of opening ceremony to demand a living wage, and then again in week two of the Games. Actions like this, and those of the black activists before them, can actually, as the tagline goes, “inspire a generation”.

Adapted from an article by Brian Richardson in Socialist Review UK

World Cup of fraud—FIFA corrupt to the core