After his deportation from the UK to Sri Lanka, Tamil asylum seeker Hari says he was beaten on his back with electrical wire and suspended upside down by chains. His 17 days of torture were revealed by The Guardian one month after Australian Immigration Minister Chris Bowen met with Sri Lankan President Mahindra Rajapkse.

A High Court decision on whether “out of process” asylum seekers—those who have exhausted avenues to appeal rejection of their refugee status—can be deported, will come down any time between now and October. Refugee activists believe there as many as 100 such asylum seekers.

If the case succeeds, asylum seekers will get a review of last minute appeals to the Immigration Minister. This will mean one more appeal, but won’t stop deportations entirely. If the case fails, deportations will begin immediately. 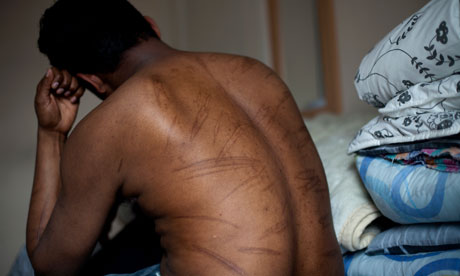 In 2010, an Indian deportee was physically beaten by Serco guards to get him onto the plane. After the deportation failed he was locked in isolation in the high security section of Villawood detention centre.

The Edmund Rice Centre’s Deported to Danger records up to nine people were killed after the Howard government returned them to Afghanistan. Afghan asylum seekers today likely face a similar fate. Up to 40 people were killed in just one day in early June in Afghanistan by suicide bombs and NATO air strikes. Hazaras are the targets of sectarian attacks that since 2004 have seen tens killed and injured.

And as Hari’s case shows, the situation for Tamils has scarcely improved since Rajapakse’s murderous civil war. Amnesty International says up to 32 activists disappeared between October 2011 and May 2012. Tamils are still fleeing, some directly from Sri Lanka to Australia by boat.

Activists in Perth have already begun a phone tree of those ready to respond to deportations. This year’s ACTU Congress voted to oppose deportations. In 2003, the ACTU had a position of supporting “direct action” to “make sure … people are kept in Australia”, and activists are looking to rebuild that strong union support. It will be crucial to stop Labor deporting to danger.